There is a app for that and in this case it was one app to far!

The US authorities have blocked access to three websites offering pirated copies of Android apps. 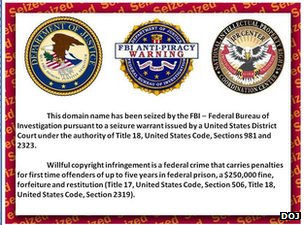 The Department of Justice said it was the “first time website domains involving cell phone app marketplaces have been seized”.

Their pages now display a FBI warning that first-time offenders involved in copyright infringement face up to five years in jail.

“The theft of intellectual property, particularly within the cyber-arena, is a growing problem and one that cannot be ignored by the US government’s law enforcement community,” said the FBI in a statement.

“These thefts cost companies millions of dollars and can even inhibit the development and implementation of new ideas and applications.”

The agency said search warrants had been executed in six areas of the country including Georgia, Florida, Mississippi and Texas.

In addition it said international law enforcers, including officials from France…