#AceEnvironmentNews says latest news about #fracking is intensifying as more evidence comes to light, not just about damage to our environment and people are starting to want answers.

Question is do we want  cheap energy at the cost of our health?

This recent report from University of Missouri and U.S. Geological Survey researchers suggested that fracking may be responsible for elevated levels of hormonedisrupting chemicals found in some water.

The release of this report was followed by a rash of fear-mongering headlines like “Sex-change chemicals linked to fracking” (The Telegraph) and “Fracking chemicals could cause infertility, cancer and birth defects” (ABC 7 News).

But such coverage steamroll over many of the study’s crucial complexities.

In fact, there’s no evidence that exposure to fracking chemicals will change your sex or disrupt your sexual function or cause infertility, cancer, or birth defects.

The new study these stories were based on was published Dec. 16 in the journal Endocrinology. While it did find higher levels of endocrine-disrupting chemicals (EDCs) in water collected near the sites of fracking accidents, understanding what that means and whether you should be concerned requires a more nuanced understanding of both EDCs and fracking.

EDCs are substances that have the potential to affect the behavior of hormones like estrogen and insulin, and research in animals and in the lab suggest they may have a role in infertility, cancers, even obesity and diabetes. Fetuses, babies, and young children may be especially vulnerable. Some scientists also suspect that EDCs may have an effect on sexual development, though evidence of these effects in human populations is scant.

Researchers run into a big problem though when they try to link the presence of EDCs to illness: Such chemicals are known to be widespread in the environment and come from many different sources.

They’ve been in drinking water for more than a decade and are also in the air, our food, cosmetics, pesticides, and countless man-made materials, most famously in the common chemical BPA, which is found in many plastics, on store receipts, and in the lining of cans of food and soda. Even naturally occurring substances like some found in soy can disrupt the endocrine system.

The term EDC just stands for a general class of chemical: those that have the potential to interfere with our hormone-regulating (endocrine) system. They can mimic, block, or cause over- or under-production of certain hormones. But different chemicals will have different effects, which will vary by species, gender, age, and amount of exposure.

Crucially, the presence of an endocrine disruptor does not mean that it is doing damage, and  little agreement about the levels at which EDCs may be safe in humans. One recent roundup of the research in Endocrine Reviews suggested that traditional methods for assessing chemical safety might not be applicable to EDCs. On one hand, the Endocrine Society, an international professional group of hormone researchers and practicing endocrinologists, released a statement on EDCs last year concluding that, especially in fetuses and newborns, “very low-dose EDC exposures [could] have potent and irreversible effects.”

On the other, in a comprehensive report on endocrine disruptors, the European Food Safety Authority emphasizes that “for most toxic processes, it is generally assumed that there is a threshold of exposure below which no biologically significant effect will be induced.” And substances may have physiological effects on the endocrine system, the report notes, without provoking any adverse consequences.

In sum, the potential dangers of environmental EDCs are very complex. As the EPA notes in a primer on endocrine disruptors, “the relationship of human diseases of the endocrine system and exposure to environmental contaminants is poorly understood and scientifically controversial.” 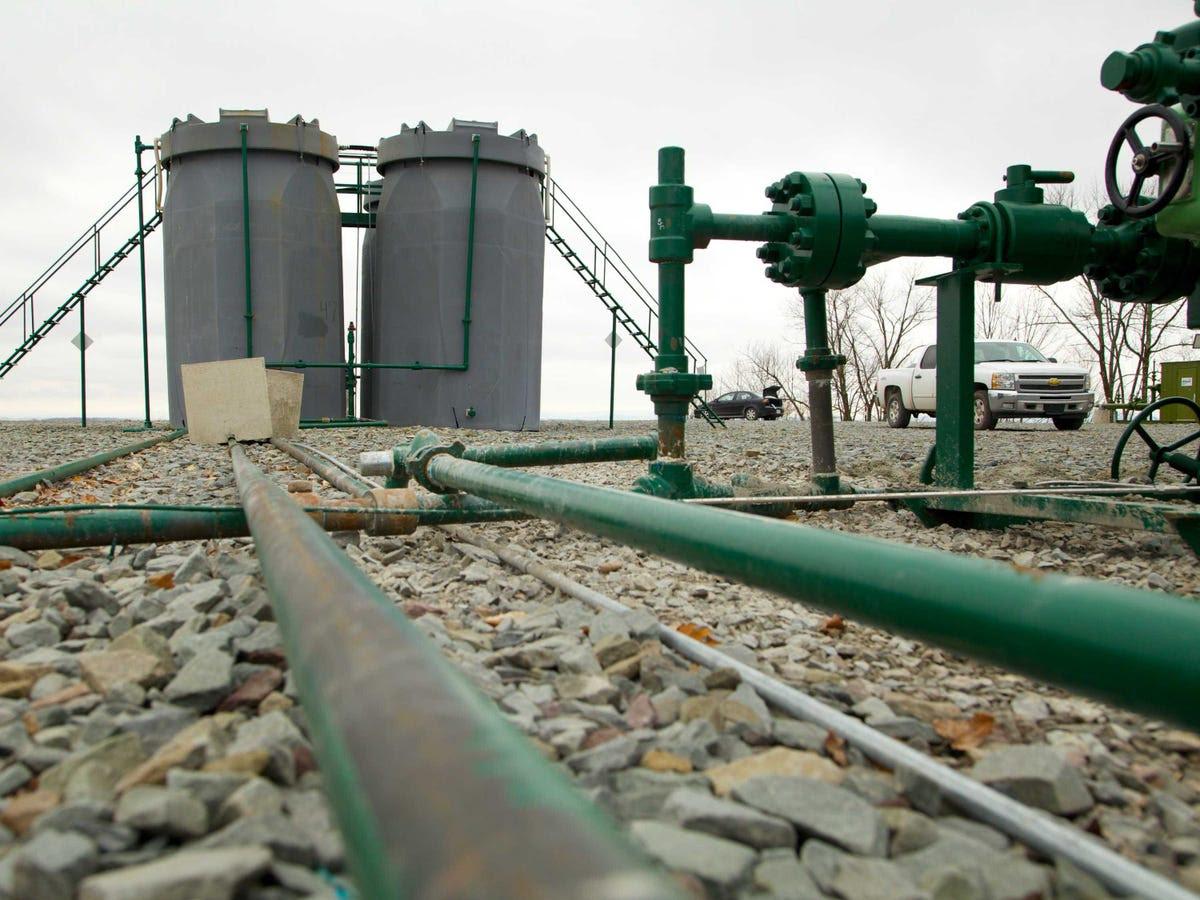 What does this have to do with natural gas? Hydraulic fracturing, more commonly called “fracking,” is a process that shoots a mixture of water, sand, and chemicals deep into the ground to extract natural gas.

These chemicals are somewhat mysterious, and for years there have been anecdotal reports of miscarriages, headaches, nausea, tumors, and other health problems that sufferers attribute to fracking, but there is precious little data.

Some conclude most evidence suggests fracking is safe; others argue that we shouldn’t be guinea pigs.

The Endocrinology study researchers wanted to see if they could offer more clues about fracking chemicals by finding out whether there were increased levels of EDCs in areas near fracking sites and spills.

The exact mixture injected into wells is kept secret by fracking companies, but an investigation by the House Committee on Energy and Commerce identified 750 of the chemicals used, which ranged from “harmless” (salt, citric acid), to “unexpected” (instant coffee), to “extremely toxic” (benzene, lead). The most widely used chemical was methanol, a toxic air pollutant.

Just because a chemical is used during the fracking process does not mean that it leaches into the water or the air. The potential of such contamination is a reasonable fear, noted in the House report — it’s even a documented problem — but it’s not a certainty. While a preliminary Department of Energy analysis has yet to determine that fracking-related contamination is a problem, much more research is needed.

One small study of a Colorado town associated #fracking with higher levels of toxic chemicals like benzene in the air. Another study in Pennsylvania suggested that home-owners living less than 1 kilometer from fracking sites are more likely to have drinking water that’s been contaminated by stray gases.

But even if toxic chemicals are detected, they might not reach levels high enough to harm humans. As NPR detailed in its 2012 series on fracking, “the mere presence of a chemical isn’t enough to show it caused a symptom.”

Are fracking chemicals messing with your hormones?

In short: We really don’t know, and anyone who claims to know for sure — either way — may have an agenda.

Theo Colborn, an anti-fracking activist and zoologist who pioneered research into endocrine disruption, published a recent study for which she sampled the air quality of a fracking-dense Colorado county and detected 30 suspected endocrine disruptors. But the design of that study meant that while it insinuated that fracking was the source of the EDCs, it could not actually prove any relationship between the chemicals and nearby fracking sites.

The new Endocrinology study also did not prove that fracking causes EDC contamination. But the researchers did find a strong association between fracking-dense areas and water with higher levels of EDCs.

To show this, they purchased twelve suspected EDCs known to be used in #fracking operations and ran a cell culture test to measure whether each chemical would either mimic or block the behavior of certain hormones. They confirmed that — in cells in the lab — all but one had some effect on estrogen or androgens like testosterone, which proved that they were indeed EDCs but not that they were harmful (or safe) to humans. These tests gave the researchers a blueprint of what kind of activity they were looking for in the fracking sites.

Back in the lab, they didn’t identify any specific chemicals in the water, but they used the same cell culture test to measure the overall endocrine activity of the water samples. Eighty-nine percent of the samples — including the controls — showed at least some effect on hormone production, but the levels of activity varied widely, and endocrine activity was elevated across the board in the water from fracking-dense regions.

Anti-androgenic activity, which suppresses the functions of hormones like testosterone and was an observed effect of some of the tested fracking chemicals, was detected in samples from all but one of the fracking sites and none of the control sites. (The researchers suggest that the one fracked site without such activity may have been different because the fracking accident there involved chemicals spilling into a creek, perhaps carrying them away more quickly.)

Still, the study did not examine the health effects of fracking on humans directly. It did not investigate whether non-spill sites also contain elevated levels of EDCs. And sampling water from regions in two different states, from counties with very different population densities, may have confounded the results somewhat — although since the Missouri control county is more urban, EDCs from wastewater contamination and other sources may have actually been higher there than in a comparable rural region.

Unquestionably, this is the beginning of research into fracking and EDCs, not an open-and-shut conclusion.

“It is the first tiny little study in what needs to be a wealth of research attention focused on this issue,” study author Susan Nagel, an endocrinologist at the University of Missouri School of Medicine at Columbia, Mo., told Business Insider.

So how did this study come to be?

It was a collaboration between an endocrinologist, a research toxicologist, a bio-statistician, and others. The authors, some of whom have a longstanding research interest in EDCs in the environment, suspected that fracking might be yet another a source of these increasingly ubiquitous chemicals.

Given this funding mix, it’s clear that while the science is solid and the findings are notable, there was probably an endgame in mind: more effective regulation around a potentially harmful but still largely mysterious process.

Energy in Depth, an oil-and-gas industry group that clearly has a horse in this race, quickly responded to the study, highlighting what they saw as several problems. They pointed out, for example, that the researchers can’t know for sure that all the EDCs they detected were from fracking, which is true, but they unfairly took issue with the fact that data was collected from fracking spill sites — such accidents are a pervasive problem, not an anomaly.

The upshot is this complicated tale: The Endocrinology study is a cause for concern, not alarm. It suggests scientists should do more research to investigate how fracking might be interfering with our sensitive endocrine system and that fracking accidents in particular may be a source of risk. But the only route to clear proof of harm or safety may be human tests that would be unethical and illegal.

In any case, fracking’s hormonal effects would likely be subtle, varied, and hard to track. With EDCs all around us, we can’t yet know how much fracking contributes to them.

So are the chemicals used in fracking really responsible for elevated levels of endocrine disruptors in the water? As Nagel told Business Insider, “it’s a hypothesis that we’re testing, not a proven phenomenon.”