#AceSecurityNews says just received this post from news desk outlining a further saga in the #NSA and #Edward-Snowden story.

Amid calls for the clemency of #Edward-Snowden many questions remain about the 30-year-old’s flight from America and asylum in Russia.

One major unresolved issue is the relationship between “the most dangerous leaker in American history” and #WikiLeaks, an organization with an admitted antagonism toward the U.S. and a cozy history with the Kremlin.

After the NSA contractor outed himself in Hong Kong on June 9, he parted ways with the journalists he met there and went underground.

On June 12, the same day he leaked specific details of #NSA hacking in China to the South China Morning Post, Snowden contacted #WikiLeaks. The organization subsequently paid for his lodgings and sent top advisor Sarah Harrison to help.

Harrison accompanied Snowden as he met with Russian officials (perhaps in the Kremlin consulate), and #WikiLeaks bought his ticket to Moscow onJune 23.

(Some suspect Russia and/or #WikiLeaks contacted #Snowden before June 12, but there is no clear evidence of that.)

#Snowden and his closest supporters contend that he was on his way to Latin America when the U.S. government stranded him inMoscow, but there are several reasons to doubt that claim.

First, WikiLeaks founder Julian Assange told Janet Reitman of Rolling Stone that he advised #Snowdon against going to Latin America because “he would be physically safest in Russia.”

Second, the U.S. revoked #Snowden’s passport by June 22, and the unsigned Ecuadorian travel document acquired by Assange was void when #Snowden landed in Moscow.

#WikiLeaks told BI that the Ecuadorian document was meant help #Snowden leave Hong Kong, which raises the question of  why he would need it if his passport was still good. The organization has not explained why it would send the #NSA-trained hacker to Russia knowing he would land with a void passport and a bunk travel document.

On July 12, #Snowden’s Moscow lawyer Anatoly Kucherena explained that #Snowden “is in a situation with no way out. He has no passport and can travel nowhere; he has no visa.”

Third, even if #Snowden had proper travel documentation, it’s unclear if Russia’s post-Soviet security services (FSB) would have allowed a systems administrator who beat the NSA vetting system and stole a bunch of intel to simply “pass through the business lounge, on the way to Cuba.”

On Aug. 1 Kucherena, who is employed by the FSB, explained why Russia granted Snowden temporary asylum: “Edward couldn’t come and buy himself tickets to Havana or any other countries since he had no passport.”

We would like to thank the Russian people and all those others who have helped to protect Mr. Snowden. We have won the battle–now the war.

Beyond its role in Snowden’s getaway and its friendliness with Russia, WikiLeaks is also connected to three of the main people with access to the leaked NSA files. This fact does not necessarily tarnish their reporting, but it is intriguing in light of #Wikileaks’ deep involvement with#Snowden.

Laura Poitras and Glenn Greenwald, two journalists contacted by Snowden and then given tens of thousands of documents by Snowden in Hong Kong, sit on the board of a foundation that launched in December 2012 to crowd-source funding for WikiLeaks.

Jacob Appelbaum, a close friend of Poitras and lead author of at least one Der Spiegel story citing the #Snowden leaks, is known as “The American WikiLeaks Hacker” and has co-authored others articles drawing from “internal #NSA documents viewed by SPIEGEL.”

Appelbaum is not a journalist and does not hide his disdain for the #NSA. This week he ended a talk — during which he presented never-before-seen #NSA documents — by saying: “[If] you work for the #NSA, I’d just like to encourage you to leak more documents.”

Assange told the same audience to “join the CIA. Go in there. Go into the ballpark and get the ball and bring it out … all those organizations will be infiltrated by this generation.”

That is the same man largely credited with extricating #Snowden from extradition to the U.S. by sending him to Moscow. The 42-year-old Australian has also hosted a Kremlin-funded TV show. And his political party recently met with Syrian president Bashar al-Assad, who is staunchly backed by the Kremlin.

No wonder Greenwald told Rolling Stone that “Julian stepping forward and being the face of the story wasn’t great for #Snowden.”

Snowden also hurt his own cause. Although he initiated an important debate, his statements and actions also pushed him beyond being an honest whistleblower.

All things considered, Snowden’s affiliation with Assange and WikiLeaks raises a legitimate question: Is the fact that his life is now overseen by a Russian security detail more than an extraordinary coincidence?

Given that we still don’t know how many classified documents Snowden stole or when he gave up access, that question should concern everyone.

Editor’s note: Here’s a graphic that we put together in November to summarize the Snowden saga: 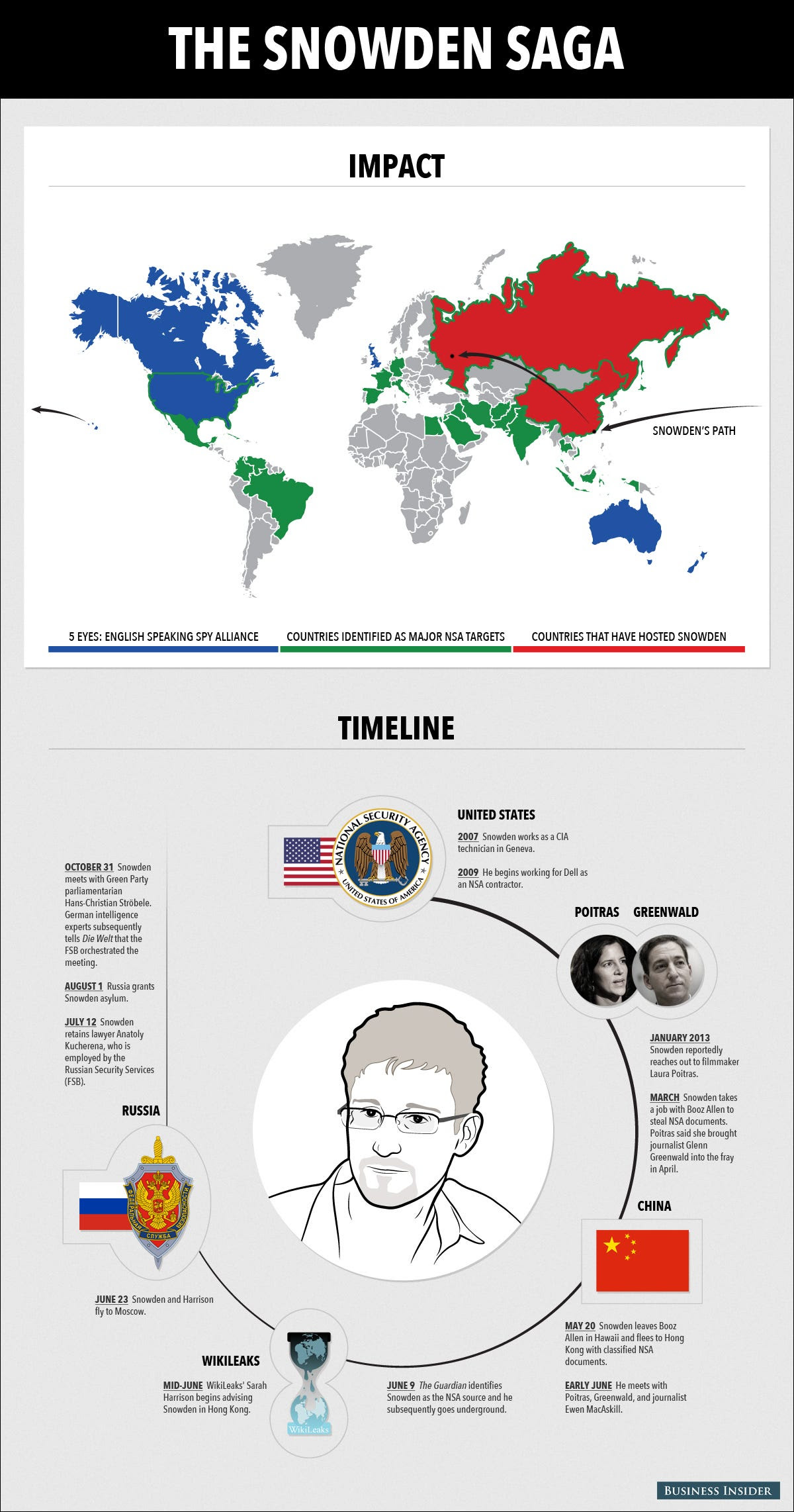 SEE ALSO: Julian Assange Gave A Very Peculiar Response When He Was Asked About ‘Getting Snowden Out Of The US’