#AceNewsReport – FEATURED UPDATE: USA:April.17: A key provision of the Patriot Act is set to expire in a matter of weeks. That means that if Congress does nothing, the unconstitutional surveillance of everyone’s phone records will end.

Sound great? We think so too. But some NSA apologists want to see this program extended. That’s why we need you to tell Congress not to reauthorize Section 215 of the Patriot Act.

The NSA surveillance program collects hundreds of millions of phone records daily. One federal judge criticized the program as “beyond Orwellian” and “likely unconstitutional.” And even the government-appointed Privacy and Civil Liberties Oversight Board has said this program doesn’t make us any safer, stating that they couldn’t find a single example of a threat to the United States where this program made a concrete difference in the outcome of a counterterrorism investigation.

How bad is it? Check out a new video by filmmaker Kirby Ferguson explaining why we need to stop mass spying under the Patriot Act: 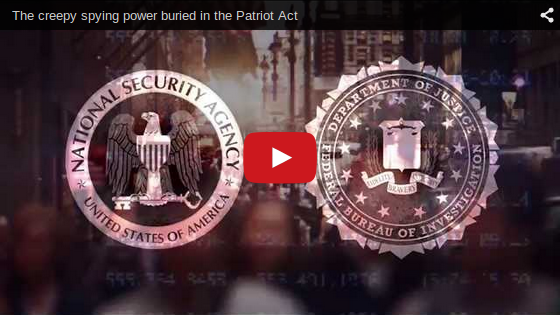 Edward Snowden, who risked everything to shed light on NSA surveillance abuses, is urging people to join this campaign:

The next 60 days are a historic opportunity to rein in the NSA, but the only one who can end the worst of its abuses is you. Call your representatives and tell them that the unconstitutional ‘bulk collection’ of Americans’ private records under Section 215 of the Patriot Act must end.

Please join us in calling for the end of NSA mass surveillance. Dial 215-600-2215 to connect to your member of Congress or visit Fight 215 to speak out. Not in the U.S.? You can also tweet at members of the U.S. Congress.