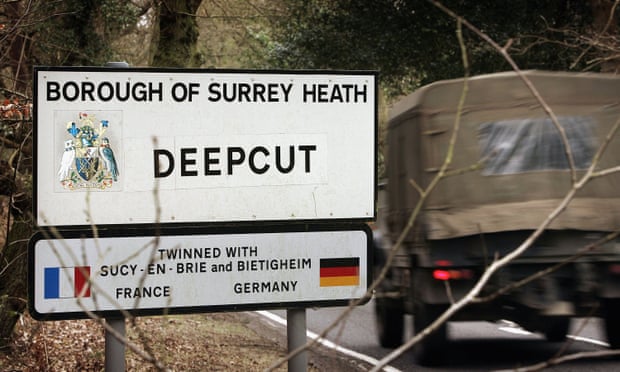 The release of the report later on Wednesday by the pressure group ForcesWatch, timed to coincide with the third reading of the armed forces bill in the House of Commons, calls on the UK to stop recruiting juveniles to the military altogether.

Britain is the only country in Europe, Nato and the UN permanent security council to recruit adolescents and is one of around 20 countries globally, including Iran and North Korea, that use under-18s in the military.

A group of Plaid Cymru and Green MPs have tabled a parliamentary amendment to the armed forces bill to raise the recruitment age to 18 but it is not expected to attract wide enough support to pass into law.

The MoD has not been able to deploy minors into combat since 2003, although a ministerial letter from earlier this year stated that seven 17-year-olds were mistakenly sent to war zones between 2007 and 2010 as part of active operations; four to Iraq and three to Afghanistan. The armed forces minister, Mark Francois, stated that since 2013 no under-18s had been sent to war zones.

‘I was conned’: This video tells the story of David Buck who joined the army at 17 but now feels he was mislead by recruitment marketing

The ForcesWatch report finds that 10 years after a parliamentary committee inquiry into deaths at the Deepcut army barracks, in Surrey, including those of two 17-year-olds, many urgent recommendations remain unimplemented.

All four shootings at Deepcut involved young recruits on armed guard duty. The ensuing investigation by MPs recommended that the “MoD must ensure that under-18-year-olds do not undertake armed guard duty”.

The Labour government at the time said that, in the long term, recruitment to special guard units would “obviate the need” for minors to undertake such duties. But 10 years on the practice endures, the MoD confirmed earlier this year.

The UK military recruits 2,000 16- to 17-year-olds, making up a quarter of all new enlistments, according to figures compiled in a parliamentary briefingby Child Soldiers International. Four-fifths of these recruits sign up to the army, and the briefing says they are more likely to suffer from harm during their lives.

Liz Saville Roberts, one of three Plaid Cymru MPs who tabled the amendment to raise the recruitment age, said she feared that teenagers from poor backgrounds who had little in the way of educational achievement were being targeted by MoD recruiters.

“In the eyes of the law, you are still a minor under the age of 18 but this is not recognised by the armed forces. Young people in deprived communities are particularly vulnerable to a double-hit of socioeconomic problems coupled with living in areas targeted by the armed forces for recruiting.

“I hope that this amendment to raise the age of recruitment to 18 years old will attract support from across the political spectrum and put the issue of young people’s role in the armed forces firmly on the agenda, ” she said.

In response to concerns about armed guard duty being performed by minors, an army spokesperson said: “Service personnel chosen for guarding duty must be at least 17 years old and must have completed normal basic training and judgmental assessment. Trainees are supervised when undertaking armed guarding duties and must operate in pairs as a minimum.”

An MoD spokesperson said adolescents could only be recruited with parental consent and it would “continue to actively recruit across all age groups”.

They said the military took pride in providing “challenging and constructive education, training, and employment opportunities for young people, equipping them with valuable and transferable skills”.

Thanks for following as always appreciate every like, mention , reblog or #tweet also our newspaper is added with all our posts daily: