#AceNewsReport – Dec.15: Editor says it’s all guess work at present after FCC voted last night but here’s what we know so far: Net neutrality is DEAD—3 out of 5 federal regulators have voted Thursday to hand control of the future of the Internet to cable and telecommunication companies: This means giving them powers to speed up service for websites they favour or slow down others #AceNewsDesk reports

// The Hacker News reports as proposed this summer, the US Federal Communications Commission (FCC) has rolled back Net Neutrality rules that require Internet Service Providers…….// BuzzFeed reports that the FCC Just Voted To Allow Your Internet Company To Charge You More For Netflix And Facebook 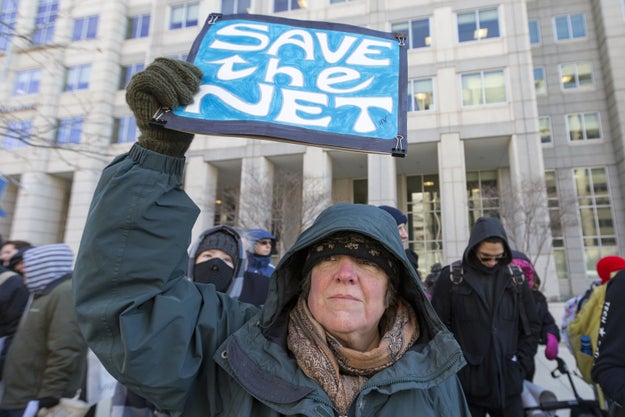 A woman protests the repeal of net neutrality outside the Federal Communications Commission headquarters in Washington, DC, on Dec.13: Alex Edelman / AFP / Getty Images: The Federal Communications Commission voted to repeal Obama-era regulations protecting net neutrality — rules that prohibit internet service providers from slowing websites or charging premiums for “fast lanes” for specific services or higher-quality streaming. On Thursday, the commission, whose deliberations were briefly delayed by a security concern, passed the widely expected decision on a 3–2 vote.Though the decision is a major setback for technology companies, consumer groups, and Democrats who lobbied aggressively against deregulation, it was all but a foregone conclusion. The FCC is led by longtime net neutrality critic Ajit Pai, who was appointed as a commissioner by President Obama in 2012 and nominated to his current role as chairman by President Trump……”This is not going to destroy the internet. … It’s not going to end democracy“…….Net neutrality should be rolled back, Pai argued in his November proposal, to stop the federal government from “micromanaging the internet.” (Bizarrely, Pai also appeared in a video for conservative news site Daily Caller on Wednesday to promote the net neutrality repeal and danced with a woman linked to the so-called “Pizzagate” conspiracy.)…….”We are restoring the light-touch framework that has governed the internet for much of its existence,” said Pai at the FCC’s open meeting after a lengthy discussion discussing the agenda topic dubbed “Restoring Internet Freedom.” “This is not going to destroy the internet. It’s not going to end the internet as we know it. It’s not going to end democracy.”……On Thursday, the FCC’s commissioners all seemed aware that this month’s open meeting faced extra scrutiny. Following Commissioner Mignon Clyburn’s rebuke of a person’s cell phone ringing during proceedings, Pai joked, “Thankfully, no one is watching.“……..Thousands watched Thursday’s meeting online via multiple livestreams, which were interrupted when Pai, halfway through his remarks on net neutrality, ordered a recess “on advice of security.” The chamber was cleared and police then brought in dogs to check the room for potential threats. People were let back into the room after about a 10-minute break……..The repeal of net neutrality has been a heated political issue. It is a sweeping win for Republicans, who promised to roll back the efforts of the Obama administration, but it has proven highly unpopular among consumers……….A recent survey showed that 83% of Americans opposed the plan for deregulation……..The telecommunications industry was largely in favor of net neutrality’s repeal, saying the rules have handcuffed private internet providers to innovate on services and build out networks, particularly in rural America……..But it’s been loudly criticized by multiple technology companies and consumer advocacy groups, who say net neutrality is essential for an open and competitive internet. A repeal, supporters of net neutrality say, would take away the level playing field of the internet and favor the bigger players online, harming smaller actors who wanted to get into the field and ultimately hurting consumers. In July, companies like Netflix, Twitter, and Reddit participated in a net neutrality Day of Action, embedding messages of support for net neutrality into their websites and apps that day…….This week, however, few tech companies participated in visible displays of opposition to a rollback of net neutrality rules. While Reddit, Etsy, and Kickstarter continued their protests online, tech’s biggest companies, like Facebook and Google, were noticeably silent…….”We’re disappointed in the FCC’s decision to gut the net neutrality protections that ushered in an unprecedented era of innovation, creativity and civic engagement,” a Netflix spokesperson said in a statement. “Today’s decision is the beginning of a longer legal battle. Netflix will stand with innovators, large and small, to oppose this misguided FCC order.”……..”The FCC just gave Big Telecom an early Christmas present“……..”We remain committed to the net neutrality policies that enjoy overwhelming public support, have been approved by the courts, and are working well for every part of the internet economy,” a Google spokesperson saide. “We will work with other net neutrality supporters large and small to promote strong, enforceable protections.”………Within hours of the vote, Twitter, Reddit, Facebook and Airbnb also publicly slammed the FCC’s decision………Though the vote was a landmark decision, it will be a few months before the deregulation goes into effect. And in the meantime, Democrats and consumer advocacy groups will likely file lawsuits to try and hinder that process……..”Why are we witnessing such an unprecedented groundswell of public support, for keeping the 2015 net neutrality protections in place?” asked Clyburn, an Obama-nominated FCC commissioner, in prepared remarks during the meeting. “Because the public can plainly see, that a soon-to-be-toothless FCC, is handing the keys to the internet — the internet, one of the most remarkable, empowering, enabling inventions of our lifetime — over to a handful of multibillion-dollar corporations.”

Shortly after the vote, New York Attorney General Eric Schneiderman announced his intent to lead a multistate lawsuit to prevent the rollback of net neutrality. The attorney general had already been investigating how millions of fake comments flooded the net neutrality comment process prior to Thursday’s decision…….“The FCC’s vote to rip apart net neutrality is a blow to New York consumers, and to everyone who cares about a free and open internet,” Schneiderman said in a statement. “The FCC just gave Big Telecom an early Christmas present, by giving internet service providers yet another way to put corporate profits over consumers.”……..