#AceNewsReport – Mar.05: The 12 suspects were among 20 people for whom detention warrants were issued by the Ankara state prosecutors’ office, Anadolu said……..It said they were foreign citizens and had been seeking to recruit new members to the group: Turkey detains 12 Daesh suspects, seeks 8 others Turkish authorities regularly detain #Daesh suspects and it was not clear whether there was any connection between the arrests and the US embassy move………Anadolu said the police operation was “planned previously“: #AceNewsDesk reports 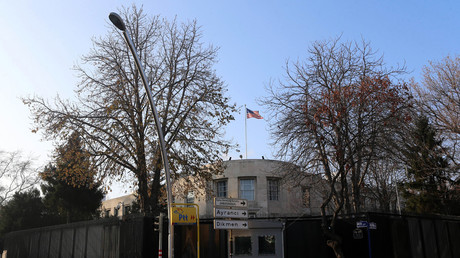 US embassy in Turkey closed over security threat amid tensions between nations
The US embassy in Ankara will be shut down starting Tuesday due to a security threat, it said in a statement. The reopening date is yet to be scheduled. The move comes amid tensions between the US and Turkey: On Sunday evening, the US embassy in Ankara said it would be closed to the public on Monday due to a security threat and only emergency services will be provided:U.S. Embassy in Turkey Closes, Tells Americans There to ‘Keep a Low Profile’ Due to Security Threat https://t.co/PUxf79Uivypic.twitter.com/Q9aPj1QZWw— KTLA March 5, 2018: It advised US citizens in Turkey to avoid large crowds and the embassy building and to be aware of their own security when visiting popular tourist sites and crowded places. It did not specify what the security threat was that prompted the closure.

The Ankara governor’s office said additional security measures were taken after intelligence from US sources suggested there might be an attack targeting the US embassy or places US citizens were staying: