#AceNewsReport – Mar.31: Editor says in Sweden and elsewhere in our insane age, the Muslim migrant rape and crime wave is not the problem: Talking about it is the problem, and those who dare to do so will be vilified, demonised, and ostracised #AceNewsDesk reports 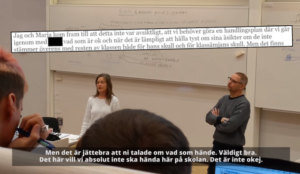 A Swedish student of Stockholm’s Royal Institute of Technology, is suspended from his class, Friatider reports. The male student, called Felix, published a fact sheet about the overrepresentation of migrants concerning sex crimes in the country.

It all started with a discussion between Felix and two female classmates. When he said migrants are overrepresented as perpetrators of sex crimes the women did not believe him and wanted to see sources of his claim.

The next day Felix came with official statistics of Sweden’s National Council for Crime Prevention (Brå) and a well verified study that showed that 95 per cent of assault rapes are committed by men with foreign backgrounds.

After he had given the fact sheet to the women the following day, it was spread in his class during a lecture. In the middle of the lecture, an African woman in the back of the hall suddenly stood up and pointed to Felix, who sat at the front.

“She screamed that I was racist and a Nazi. I tried vainly to tell her to calm down and there was no room for discussion”, says Felix.

A teacher immediately interrupted the tumult. But during the lecture, the screaming woman contacted a large number of male immigrants who came outside the lecture hall and stared at Felix through the window.

“I thought this was going to be hell, so I would stay five minutes extra in the classroom. But they did not leave. I decided to go to an end because I could not sit and humiliate myself. Just when I left the classroom, they marched into formation and the woman shouted: “Here are your rapists!”

“I managed to get away from there through the second exit. It was an extremely threatening situation. If I had complained, I would certainly have been knocked down,” says Felix….