#AceNewsReport – June.07: The Metropolitan Police is investigating London Fire Brigade’s use of a “stay put” policy during last year’s fire at Grenfell Tower: The tower’s residents were told to stay in their flats in the early stages of the fire – a so-called stay-put policy……….BBC home affairs correspondent Tom Symonds said the Met was considering possible health and safety offences……….It comes as lawyers for London Fire Brigade have been outlining its role at the Grenfell Tower public inquiry………..Met Police commander Stuart Cundy said: “Seventy people, plus baby Logan, died as a direct result of that fire: ………”It’s an absolute obligation on us to be looking at the most serious potential criminal offences that may have been committed.” ………This new line of inquiry is part of a wider police investigation looking into the refurbishment of the tower and its impact on the fire………..The Met is looking at all aspects of the management of the fire and London Fire Brigade’s response to identify whether a crime was committed……….The most likely offences would be under the Health and Safety at Work Act, which requires public bodies and companies to protect the safety of the public………Offences under the act usually result in fines, though prison sentences are possible #AceNewsDesk reports 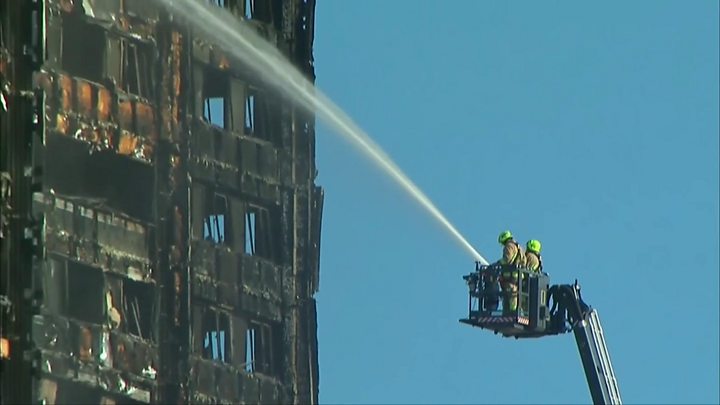 Grenfell Tower inquiry: What questions will be answered?

Previously the Met has told survivors of the fire that Kensington Council and the Tenant Management Organisation were being investigated in connection with corporate manslaughter…………Meanwhile, eight men and one woman have been arrested in dawn raids over allegations of fraud in connection with the fire.

On Monday, an expert report submitted to the Grenfell inquiry by Dr Barbara Lane found that the fire brigade’s policy to tell people to stay in their homes had “effectively failed” barely half an hour after the fire started at 01:26 BST on 14 June……..A change in policy recommending that residents leave was not made until 02:47……….On the final day of opening statements at the inquiry, Stephen Walsh, for the London Fire Brigade (LFB), said a mass evacuation of Grenfell Tower could not have happened at a stroke………He said it was a “fundamental misunderstanding” that fire commanders could change policy at any time when the building was not designed for a simultaneous evacuation………”If there is no policy applied by the building owner which provides for a policy of simultaneous evacuation and there are no evacuation plans and there are no general fire alarms – what is an incident commander on the fire ground to do?” he asked………..The building had only a single staircase and the incident commanders had no way of communicating with everyone in the building, he said……….Meanwhile, the conditions were rapidly changing, in some cases second-by-second, with lobbies and stairwells filling with toxic and potentially lethal smoke, the hearing heard………..Mr Walsh added that despite the “stay-put” policy, firefighters did evacuate residents at an early stage………They were also making decisions about the viability of getting residents out safely, and dealing with the willingness of residents to leave flats, which they perceived to be safe, to enter dark, smoke-filled corridors.

The Fire Brigades Union (FBU), which represents many of the Grenfell firefighters, agreed there was “no obvious and safe alternative strategy” to telling residents that they should stay put………Martin Seaward, for the FBU, said commanders and firefighters were left in an “impossible situation”…………The refurbishment of the building had seen material installed that made it a “highly combustible death trap”, which the brigade lacked the training and procedures to tackle, he said……….Both the union and the LFB flatly denied claims that firefighters were guilty of unconscious racism as they worked……..On Tuesday, Imran Khan, a lawyer for some of the bereaved and survivors, cited the “stereotypes” used in firefighters’ descriptions of residents from black or minority backgrounds.

On Wednesday, the inquiry heard that the man who lived in the flat where the fire started was not responsible for the tragedy………A lawyer for Behailu Kebede said his client had called 999 and alerted his flatmates and neighbours as soon as he saw smoke………Claims that his client had packed a suitcase and left the building to burn were a “nasty lie”, the hearing was told…….Since the fire, police have been so concerned for his safety that they suggested he go into a witness protection programme.

Day-by-day: the inquiry so far