#AceNewsReport – July.12: Editor says here’s just one country in the world that is presently suffering the results of ‘ Global Warming & Climate Change ‘ but still many leaders ignore the #Truth to protect their economies and keep the profits rolling in by covering up the facts: Heres just one example of the effects followed by a WMO report …. So how long do we ignore the ‘ Signs of the Times ‘ as Jesus predicted #AceNewsDesk reports

More than 200,000 households had no water a week after torrential rains caused floods and set off landslides across western Japan, bringing death and destruction to decades-old communities built on mountain slopes and flood plains: The death toll rose to 195, with several dozen people still missing, the government said on Thursday: With daily temperatures above 30 Celsius (86 Fahrenheit) and high humidity, life in school gymnasiums and other evacuation centers, where families spread out on mats on the floors, began to take a toll: Television footage showed one elderly woman trying to sleep by kneeling with her upper body on the seat of a folding chair, arms over her eyes to keep out the light. ……………………With few portable fans in the evacuation centres, many survivors tried to cool themselves with paper fans………………The limited water supply meant that people are not getting enough fluids and in danger of suffering from heatstroke, authorities said. People are also reluctant to use what water they do have to wash their hands, raising fears of epidemics………………….“Without water, we can’t really clean anything up. We can’t wash anything,” one man told NHK television…………….The government has sent water trucks to the disaster area, but supplies remain limited………..More than 70,000 military, police and firefighters toiled through the debris in a grim search for the missing……………..Some teams shoveled dirt into sacks and piled the bags into trucks. Others used diggers and chainsaws to work through landslides and splintered buildings…………………….Many areas were buried deep in mud that smelled like sewage and had hardened in the heat, making the search more difficult……………Disasters set off by torrential rains have become more frequent in Japan, perhaps due to global warming, experts say. Dozens of people died after similar rains caused flooding around the same time last year…………………..“It’s an undeniable fact that this sort of disaster due to torrential, unprecedented rain is becoming more frequent in recent years,” Chief Cabinet Secretary Yoshihide Suga said at a news conference in Tokyo……………“Preserving the lives and peaceful existence of our citizens is the government’s biggest duty. We recognize that there’s a need to look into steps we can take to reduce the damage from disasters like this even a little bit,” he added: Reuters.com with additional reporting by Kaori Kaneko; Writing by Elaine Lies; Editing by Darren Schuettler

Japan has suffered the worst flooding and landslide in decades, with many daily rainfall records broken. According to official government figures on 10 July, more than 150 people have lost their lives and the casualty toll is expected to rise. Around 10,000 houses have been destroyed and/or inundated.

Between 28 June and 8 July, there was extraordinarily heavy rainfall caused by a huge amount of water vapor from a stationary rainy front, in addition to damp air remaining from Typhoon Prapiroon. West Japan and Hokkaido experienced record precipitation during the period, according to the Japan Meteorological Agency (JMA).

Total precipitation at many observation sites reached two- to four times the mean monthly precipitation for July. For instance, 1,800 mm of rain fell in Shikoku, 1,200 mm in Tokai, 900 mm in North Kyushu, 600 mm in Kinki, and 500 mm in Chugoku. This triggered a large number of landslide, inundation and flood events.

Japan is one of the world’s best prepared countries for disaster risk reduction and disaster management. JMA issued emergency warnings in advance, targeting as many as eleven prefectures in the country to alert people to the significant likelihood of catastrophes. The emergency warning system was launched by JMA in 2013, based on lessons from the major tsunami caused by the 2011 Great East Japan Earthquake. In addition, JMA dispatched its experts as the JMA Emergency Task Team or JETT, to local governments in the region to best support multi-hazard disaster prevention activities. It set up a web portal dedicated to the heavy rain event. 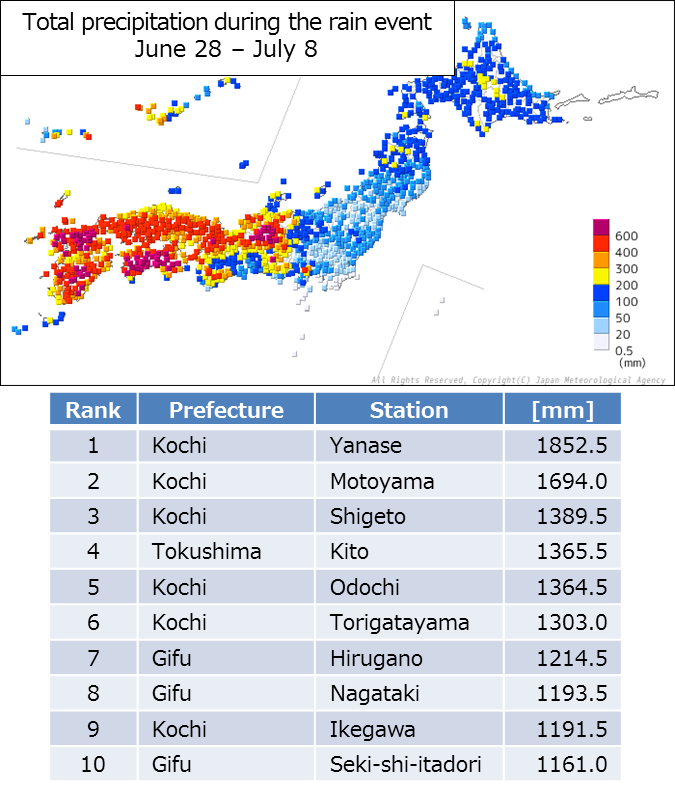 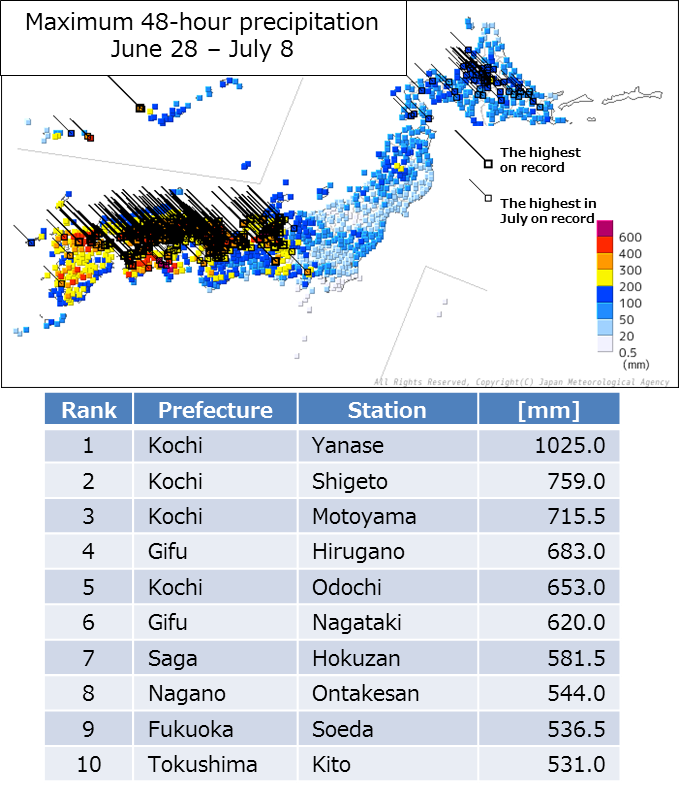 On 11 July, Typhoon Maria made landfall in coastal regions of China’s Fujian province. On the approach to Northern Taiwan, Maria was the equivalent of a category 3 hurricane on the Saffir Simpson scale, with winds of 175 km/h and gusts of 250 km/h. China’s National Meteorological Center issued a red warning on 10 July, and activated emergency response procedures.

On June 28, Quriyat, just south of Muscat, on the coast of Oman, recorded a 24-hour minimum temperature of 42.6°C, meaning that the coolest overnight temperature did not drop below that level. Although highest “low” temperature is not currently monitored as a category in the WMO Weather and Climate Extremes Archive, it is believed to be the highest such temperature ever recorded by a thermometer.

Ouargla, in Algeria’s Sahara Desert, reported a maximum temperature of 51.°C on 5 July. It is likely that this is the highest reliable temperature ever recorded in Algeria. WMO’s Weather and Climate Extremes Archive currently lists Kebili, Tunisia, as being Africa’s highest temperature with 55°C recorded in July 1931. However, there have been questions about the reliability of colonial era temperature records in Africa.

The station of Furnace Creek in Death Valley national park in California, USA, recorded a temperature of 52.0°C on 8 July. The station holds the record for the highest recorded temperature on Earth at 56.7°C (134°F), on 10 July 1913.

Other parts of California were also gripped by extreme heat. Downtown Los Angeles set a new monthly July minimum overnight record of 26.1°C on 7 July. Chino, near Los Angeles, saw a record temperature of 48.9°C (120°F). Burbank airport set a new absolute record of 45.6°C (114°F) on 6 July, beating 45°C in 1971, and Van Nuys Airport saw a record temperature of 47.2°C (117°C) according to the US National Weather Service.

In Canada, a heatwave combined with high humidity in the province of Quebec contributed to dozens of deaths, especially among the vulnerable and elderly.

At the same time, parts of Eastern Canada saw a brief return of wintery weather, with snow in parts of Newfoundland and Cape Breton (Nova Scotia), and temperatures of -1C, in St John’s and Halifax. Winter weather this late in the year is rare, this being the first since 1996.”

Temperatures were exceptionally high over large parts of northern Siberia in June 2018. That trend continued through the first week of July. The Western Siberian Hydromet Center of Russia issued a storm warning due temperatures of more than 30°C for more than five days, expected to last between 9 and 16 July. This creates high risks of wildfires as well as of power supply, transportation, and utility services disruptions and drowning of people escaping the heat in water. Krasnoyarsk Region reported daily anomalies of 7°C above average, with fires already impacting about 80,000 hectares of forest.

Drought and heat in parts of Europe 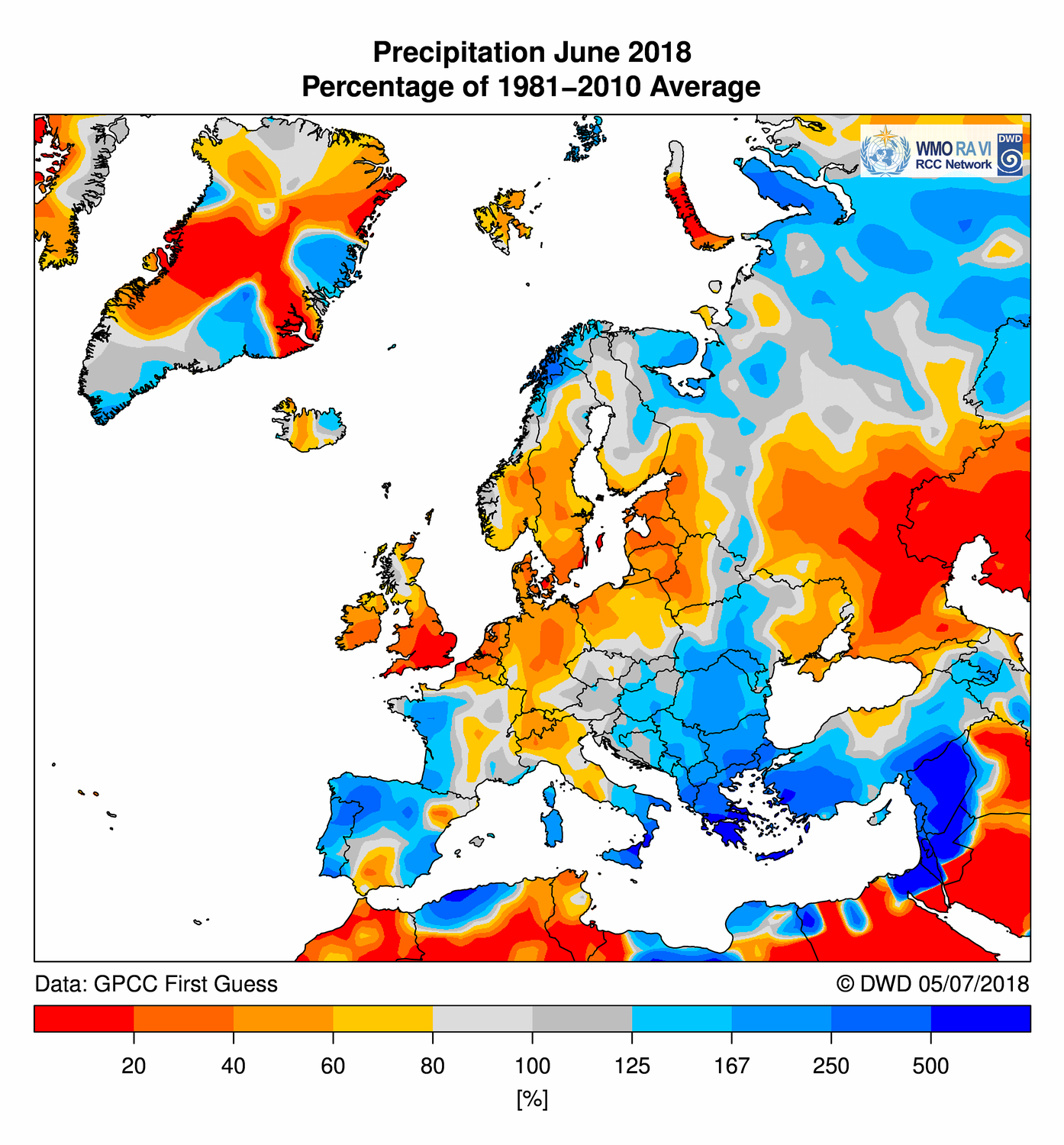 In Europe, WMO’s Regional Climate Centre on Climate Monitoring, operated by the German Weather Service, DWD, issued a Climate Watch advisory with guidance on drought and above normal temperatures valid until 23 July. The guidance product, used by National Meteorological Services to issue national warnings and forecasts, referred to a continuation of the drought situation and above-normal temperatures for northern Europe (from Ireland to the Baltic States and southern Scandinavia). The weekly temperature anomalies are forecasted with up to +3 – +6°C. The probability that precipitation will be below the lower tercile is more than 70%. This drought may be accompanied by water scarcity, local thunderstorms, risks of wildfires and harvest losses, it said.

For some parts of northern Europe, June was one of the driest, warmest on record.

After an unusually warm June, the heatwave in the United Kingdom continued into July. On 10 July, the UK’s Met Office said that somewhere in the UK had topped 28°C or above for the 16th consecutive day.

June one of the warmest on record 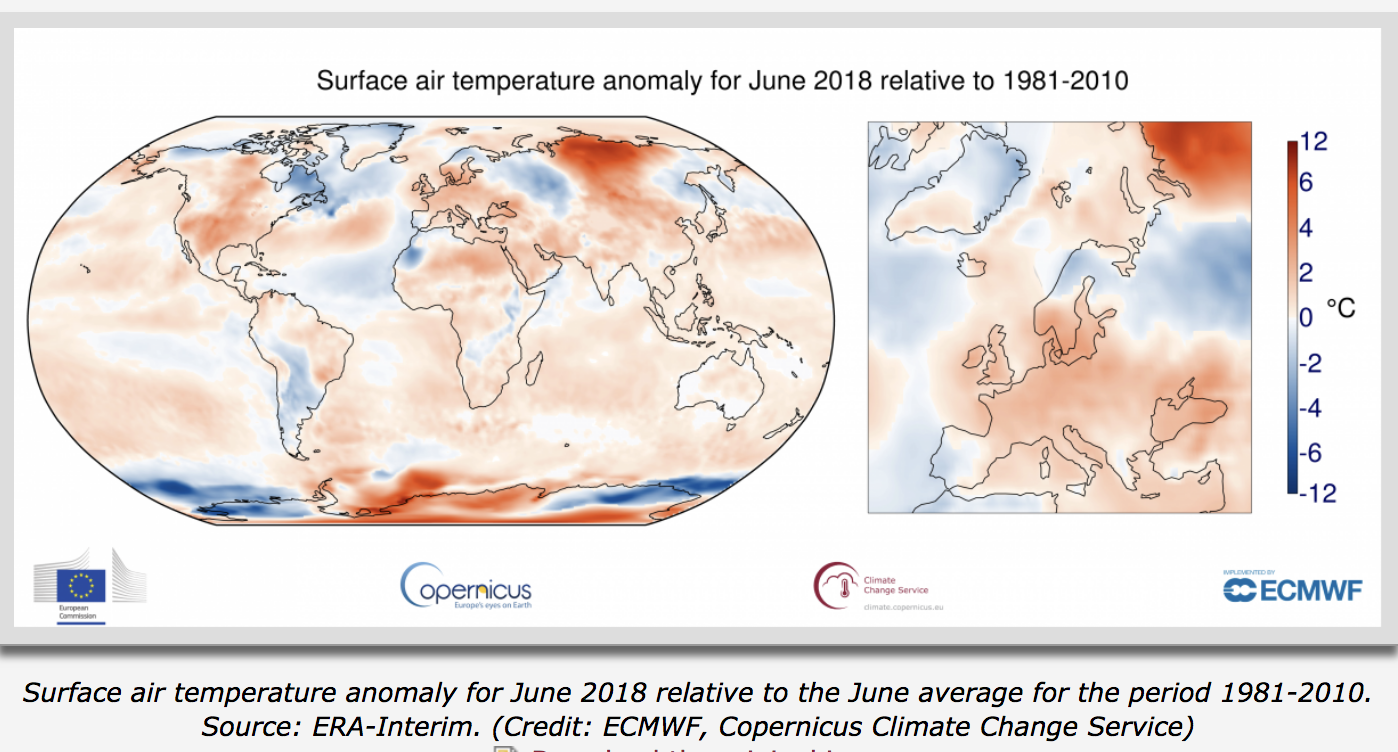 Globally, June was the second warmest on record, according to the European Centre for Medium Range Weather Forecasts Copernicus Climate Change Service. The year to date is the hottest La Niña year on record.

In addition to the exceptionally high over large parts of northern Siberia in June 2018, temperatures were also well above average over much of the USA, central Canada and North Africa, and over the Middle East and northern China.

The contiguous USA had 3rd hottest June on record. But many parts of the country had well above average minimum overnight temperatures, according to the US National Centers for Environmental Information. In 2018 (as of July 9), there have been 6 weather and climate disaster events in the USA, with losses exceeding $1 billion each across the United States. These events included 4 severe storm events and 2 winter storm events. Overall, these events resulted in the deaths of 36 people and had significant economic effects on the areas impacted. 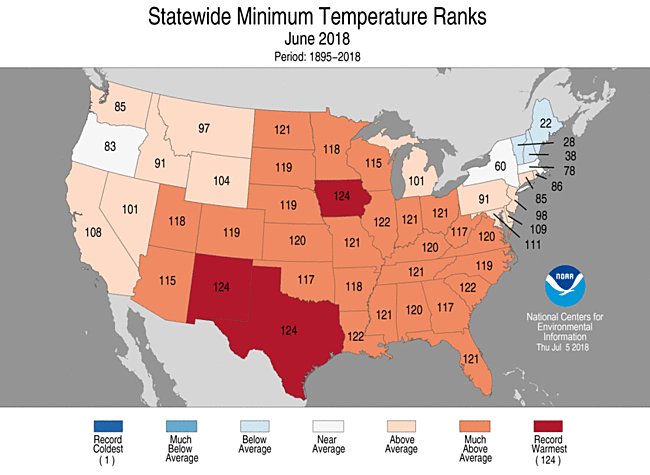 Episodes of extreme heat and precipitation are increasing as a result of climate change. Although it is not possible to attribute the individual extreme events of June and July to climate change, they are compatible with the general long-term trend due to rising concentrations of greenhouse gases.

Many recent studies have found that the probability of the extreme event has been influenced by human activity, either directly or indirectly.. Of a set of 131 studies published between 2011 and 2016 in the Bulletin of the American Meteorological Society, 65% found that the event’s probability was significantly affected by anthropogenic activities.