#AceNewsReport – Sept.11:Editor says here’s the two options being offered over Theresa Mays PLANNED NO DEAL but remember they are still Tories thats Jacob Rees-Mogg OR Boris Johnson and want the job as Prime Minister so when you read both keep that in mind as one says what might happen and the other says what can be done about the options and keep in mind who you would want as leader after she’s gone #AceNewsDesk reports 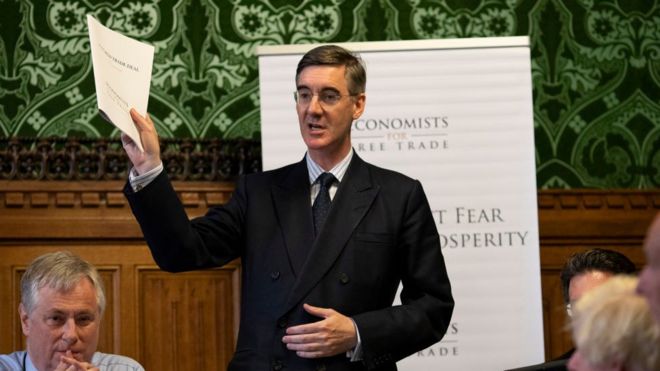 A group of Tory MPs have endorsed a plan for a “clean break” from the European Union (EU), with the UK defaulting to World Trade Organization (WTO) rules when it leaves the EU: The proposals are contained in a report by the pressure group Economists for Free Trade (EFT)

The report suggests the Treasury would receive about £80bn in extra revenue over the next 15 years, with an overall long-term gain for GDP of about 7%.

These figures are based on a number of calculations and assumptions, not all of which stand up to scrutiny.

Those who have modelled a clean Brexit properly, the EFT asserts, report long-term gains from free trade of 2%-4% of GDP. The report dismisses alternative modelling – done by the Treasury and by Whitehall’s Cross Departmental Brexit Analysis – which arrived at very different conclusions……………….But that is part of the problem. The EFT are convinced that they are the only people who have modelled the data correctly – even though theirs is a minority view.

“The vast majority of economists think it will be different,” says Prof Alan Winters, director of the UK Trade Policy Observatory at the University of Sussex.

“Because a hard Brexit will cut trade with the EU, which is by far our largest trading partner, significantly.”

For those who love the detail, here is one example of economists who criticise the EFT’s methodology.

Tory supporters of Brexit are, however, unbowed:

“Perhaps it’s our fault,” says leading Brexiteer Jacob Rees-Mogg, “by not putting the argument for a world trade deal earlier, we left the running to people who don’t want us to leave the EU at all.”

The EFT report also says the UK would no longer have to pay a net amount of £12bn to the EU every year, although that figure appears to be slightly inflated.

And it suggests that the UK could choose to withhold “most or all” of the estimated £39bn financial settlement that the government has provisionally agreed to pay the EU as part of a Withdrawal Agreement.

In theory, the UK could do that, but it would probably prompt a legal challenge from the EU, and it would certainly damage relations severely at a time when – as the EFT report suggests – the government would be looking for co-operation in a whole series of policy areas.

The report suggests that concern about congestion at UK borders after Brexit has been hugely inflated:

It says only 4% of goods arriving in the UK from non-EU countries are subject to checks, and it suggests that trade with the EU in future could therefore be almost as seamless as it is now.

It’s correct that very few physical or documentary checks are carried out on non-EU goods. But evidence given to the Home Affairs Select Committee suggests that things are rather more complicated than that.

If a lorry arrives at Dover, for example, from a non-EU country, it is usually delayed by 60 to 90 minutes even if no checks are made. The UK could choose to speed up that process and abolish many checks, but there would still be far more checks on UK goods being exported to the EU via Dover. 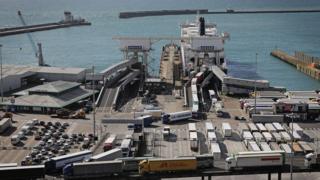 There would also be further complications for UK exports. Once the UK is designated as a third country by the EU, all UK exports of animal origin would only be able to enter EU territory via a veterinary border inspection post, where there are often time-consuming physical inspections as well as documentary checks.

Neither the Eurotunnel nor the Calais port is currently designated as a veterinary border inspection post.

The EFT report says that under WTO rules sanitary and phytosanitary measures (ie safety checks on food) can’t be used as a “surreptitious means of inhibiting cross-border trade”. This is true, but that does not erase what are known as non-tariff-barriers entirely, it simply reduces inspections where possible.

“The only countries that have managed to remove the need for health checks on food being exported to the EU,” says Sam Lowe of the Centre for European Reform, “are the European Economic Area members and Switzerland. They have not only implemented EU rules in this area domestically, they also apply EU checks on all imports of animal origin entering from the rest of the world.”

The EFT report also suggests lifting tariffs (or import charges) on imported goods to make prices cheaper. It recognises that if you do that for one country, you have to do it for every country, under WTO rules.

If tariffs were removed for all agricultural produce, cheap imports would flood in and food prices would fall – but the UK farming industry could be decimated. 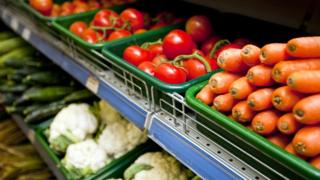 So, the report says, that “perhaps the most attractive goods to target” might be ones that we don’t produce in the UK at all. It mentions oranges as one example, but it would be a pretty limited number of goods.

Again, others are extremely sceptical about the EFT’s policy proposals.

According to a report published earlier this year by the House of Lords European Union Committee, “EU food imports cannot easily be replaced by either producing more in the UK or importing more from non-EU countries”. 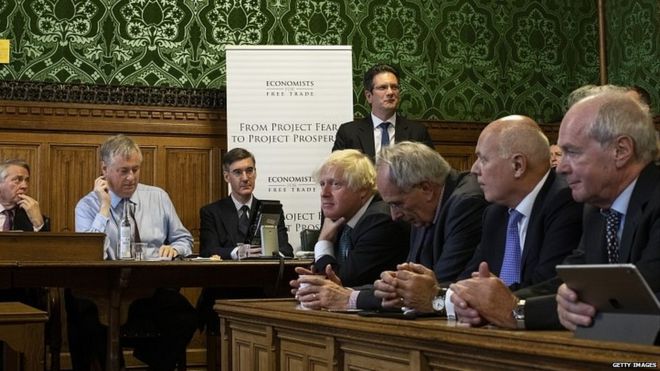 Boris Johnson and other leading Tory Brexiteers have attacked Theresa May’s Brexit plan at an event putting the economic case for leaving the EU without an agreement on trade.

The Economists For Free Trade report said the UK had “nothing to fear” from a “clean break” from the EU and using World Trade Organisation rules.

This could give an £80bn boost to the tax base and cut prices by 8%, it said

But the claims were branded “Project Fantasy” by Labour MP Chuka Umunna.

And Chancellor Philip Hammond said the economic assumptions behind the analysis were “not sustainable” and out of line with other forecasts.

Mr Hammond, who earlier on Tuesday announced Bank of England Governor Mark Carney would be extending his contract until January 2020 to provide continuity after Brexit, has issued a fresh warning of “some turbulence” if the UK left the EU in March without a deal.

Ministers have said reaching a general agreement on future economic co-operation with the EU is in the UK’s interests before it leaves on 29 March, 2019.

The UK and EU are hoping to agree a way forward next month, at the same time as they settle the terms of the UK’s withdrawal from the bloc, including a transition period up to the end of 2020.

Mr Johnson and other Conservative MPs opposed to Theresa May’s Chequers plan for future relations with the EU are facing growing pressure to provide an alternative plan.

Mr Johnson, who made a surprise appearance at the launch of the report in Westminster, said Mrs May’s Chequers plan would mean “abandoning our seat around the table in Brussels and continuing to accept the single market legislation”.

He added: “That seems to me to be a particular economic risk in Chequers and makes it substantially worse than the status quo.”