#AceNewsReport – Dec.12: A massive hunt is underway for a gunman who opened fire near a popular Christmas market in the center of the French city of Strasbourg Tuesday, killing three people and injuring 13 others: More than 350 police gendarmes and soldiers supported by air units have been mobilised to find the suspect, who was already known to security services as a possible threat, police said #AceNewsDesk reports 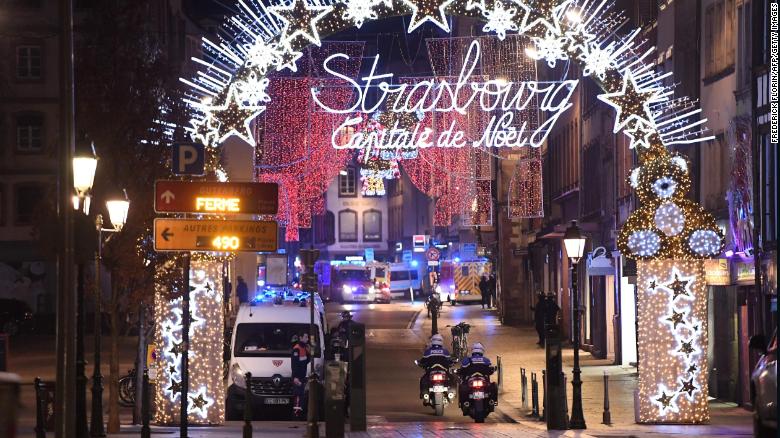 Speaking to French radio station Inter on Wednesday, the county’s Deputy Interior Minister, Laurent Nunez, said that authorities could not confirm that the suspect has “terrorist motivations.” Nunez added that while authorities have secured the border and set up a perimeter around Strasbourg, they are not sure if the suspect is still in France……….Nunez’s comments come after the Paris Prosecutor’s office confirmed to CNN that their anti-terror section was in charge of the investigation.

Strasbourg’s famed Christmas Market is one of the oldest in Europe and draws millions of visitors each year: The suspect entered the perimeter of the market by the city’s Corbeau Bridge, and began shooting at passers-by on the Rue des Orfèvres at 8 p.m. local time, when many were in the middle of their Christmas shopping.

Anti-terror police descended on the market and attempted to apprehend the suspect, who exchanged fire with security forces on at least two occasions between 8:20 p.m. and 9 p.m: French media reported the gunman was injured in one of the exchanges. He is then believed to have jumped into a taxi and fled the scene…………The attack prompted France to raise its national security threat level to its highest “emergency terror attack” status, French Interior Minister Christophe Castaner said at a press conference……….Eight people were seriously wounded, Strasbourg police said on Wednesday, with five others suffering from minor injuries.

The suspected gunman, who was identified by CNN affiliate BFM as a 29-year-old male born in Strasbourg, was on a French watch list called a “Fiche S” surveillance file…………..The “Fiche S” is a French terror and radicalization watch list that includes thousands of people, some of whom are under active surveillance, meaning they are on law enforcement’s radar…………..The suspect was also “unfavourably known” by police authorities in France and Germany, Castaner told reporters on Wednesday, adding that he was known for non-terror related offences……………..French gendarmes had attempted to bring him in for questioning Tuesday morning before the attack but found he wasn’t home, a spokesperson for France’s National Police told CNN, without providing further details.

Issam Fares, who sells chestnuts at the Strasbourg Christmas market, told AFP he heard several shots and thought they were fireworks “or they’re attacking a store.” “I saw a lot of people running, scared, crying kids and all. Then I said, in my opinion it must be very, very serious, and then … I saw people crying and the crowd leaving,” he told AFP. “They said it was shooting right next door, so I ran away. I went to hide in a restaurant, not far from Gutenberg Street.”……………The injured were taken to a Strasbourg hospital.

French President Emmanuel Macron tweeted early Wednesday in solidarity with the French people. “Solidarity of the whole Nation for Strasbourg, our victims and their families,” he said.
#Strasbourg, #France Security Alert: Police operations continue to locate the subject responsible for the incident on Tuesday evening, December 11. Movement within several areas of the city remains restricted and authorities request that the public remain sheltered in place.pic.twitter.com/qCDRFudAxE
Editor says #AceNewsDesk reports & #Brittius says are provided by Sterling Publishing & Media News and all our posts, links can be found at here Live Feeds https://acenewsroom.wordpress.com/ Ace News Services Posts https://t.me/AceSocialNews_Bot and thanks for following as always appreciate every like, reblog or retweet and free help and guidance tips on your PC software or need help & guidance from our experts AcePCHelp.WordPress.Com or you can follow our breaking news posts on AceBreakingNews.WordPress.Com or become a member on Telegram https://t.me/acebreakingnews all private chat messaging on here https://t.me/sharingandcaring