#AceNewsReport – Jan.22: Following American acceptance of the agenda of ending the invasion of Afghanistan and preventing Afghanistan from being used against other countries in the future, talks with American representatives took place today in Doha, the capital of Qatar: The session will also continue tomorrow (Tuesday), Mujahid said: The meeting was originally set to take place in Pakistan where Khalilzad had stayed for several days before traveling to Qatar: Sources said #Taliban officials refused to come to Islamabad unless the U.S. side agreed to discuss a withdrawal plan for U.S.-led foreign troops from Afghanistan: The uncertainty had led to speculation about a breakdown in the peace dialogue.Afghanistan’s Taliban opened a new round of peace talks Monday in Qatar with the United States, the insurgent group said #AceNewsDesk reports 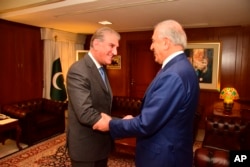 U.S. Senator Lindsey Graham, who undertook a day-long visit to Islamabad on Sunday, dismissed suggestions the dialogue with the Taliban was faltering and also praised Pakistan’s effort to help the Afghan peace process: The South Carolina Republican senator, who is considered close to President Donald Trump, spoke after a meeting with Prime Minister Imran Khan.

I can tell you the fact that the effort that was made is good: It is going to take a while. I talked with Prime Minister Khan and I think he is going to deliver a message that would be very helpful,” Graham said. He did not elaborate.

Monday’s U.S.-Taliban talks came as Prime Minister Khan also arrived in Doha for official meetings with the Qatari leadership: Diplomatic sources say Khan is likely to make contact with Taliban officials during the visit to encourage them to help in negotiating a political resolution to the Afghan war.

After ending his visit to Pakistan on Sunday, Ambassador Khalilzad sounded upbeat about the future of Afghan peace talks, saying he had “good meetings” in Islamabad: “I appreciate their [Pakistan’s] hospitality and resolve to push for Afghan peace. We’re heading in the right direction with more steps by Pakistan coming that will lead to concrete results,” the Afghan-born chief U.S. negotiator said. 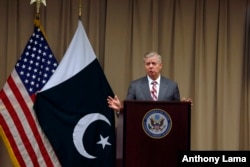 Before coming to power last July, Khan had consistently called for the U.S. to engage the Taliban in peace talks rather than using military power to end the Afghan war: His critics would call him “Taliban Khan” for demanding and supporting reconciliation with the Islamist Afghan Taliban.