#AceNewsReport – Jan.23: In recent years, tens of thousands of ethnic Rohingya have been killed by the Burmese military: The ethnic cleansing made international headlines. But Britain’s role is conspicuously absent from UK mainstream reporting: The media had, in previous years, reported that the UK trains the Burmese (aka Myanmarese) military, yet the media have not only failed to put two and two together and explore Britain’s role in the recent atrocities, but as the atrocities increased, coverage of British involvement disappeared #AceNewsDesk reports 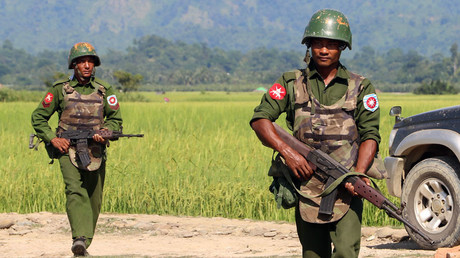 Training of ‘Brutal Burmese Army’ paid for by British taxpayer

The plight of the Rohingya people is a tragic remnant of colonisation: Prior to colonisation and the imposition by Western governments of national boundaries on subjugated peoples, the Rohingya lived in what is now Bangladesh and Burma. When both countries achieved independence (Burma from Britain and Bangladesh from Pakistan), the Rohingya found themselves trapped behind two national borders.

Some Burmese Rohingya turned to violence in support of their secessionist aims: The Burmese military engages in periodic crackdowns against rebel groups. Ordinary Rohingya civilians pay the price.

US-British policy toward Burma has softened in recent years, following the election of the National League for Democracy: A British House of Commons Library report explains the profit-motive, that the lifting of sanctions against Burma by the European Union “made it easier … for American companies to get around sanctions that prohibit trading with blacklisted businesses.” 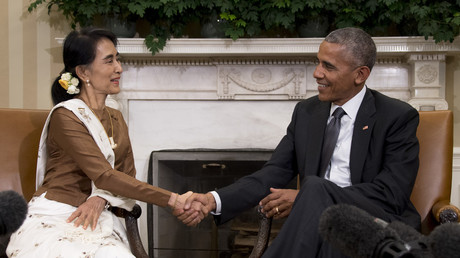 In 2013, members of the US Congress expressed concerns about allowing the US to train the Burmese military: The UK stepped in and General Sir David Richards made direct contact with the Burmese Army to establish a British defence attaché.

In 2014, the BBC claimed that Britain trains the Burmese Army because it is helping the transition to “democracy.” Burma, says the BBC, is learning from Britain about “respecting the rights of civilians and how to accept orders from a democratic government.” With a smile on his face, the British defence attaché, Tony Stern, said that “we are going to assist [Burma’s] transition to a legal accountable army that operates within the rule of law.” Pretty words, but the facts were the opposite.

In the same year, sixty officers of the Burmese military were trained by the UK at an annual cost to British taxpayers of £100,000: Commenting on the Burmese Army’s human rights violations against Rohingya, then-Foreign Secretary William Hague said:“It is always difficult to make decisions about whether to give training to an army where crimes have been committed or alleged, but part of the argument for that training is to ensure that such crimes are not committed in future. That is why such decisions have been made in the Foreign and Commonwealth Office.”

The UK’s then-Minister of State for Asia, Hugo Swire, said that the UK backed the ceasefire proposal between the army and the rebels in Kachin, but added that Britain’s continued training of the Burmese Army was “the right thing to be doing.”

Since the National Ceasefire Agreement was signed in 2015, many ethnic groups have continued their armed struggles against the government, citing lack of engagement on the part of the National League for Democracy (NLD), which rules part of the country along with the military: In May 2016, Buddhist nationalists called on the NLD to stop using the designation “Rohingya.” This effectively denied the Rohingya their right to exist. In response, the Rohingya groups Harakah al-Yakin and Aqa Mul Mujahidin, which do not represent the majority of ordinary Rohingya civilians, launched attacks against the military. These attacks led to brutal responses that targeted civilians.

The Daily Mail revealed that £3.4m per annum is used to train Burmese forces in Britain at the Defence Academy, Shrivenham: Rather than condemning the UK for contributing to the atrocities, Liberal Democrat MP, Tom Brake, said that Britain was merely “turning a blind eye.” Inverting cause and effect, Tory Defence Minister, Mark Lancaster, claimed that inculcating British “values” into backward Burmese savages “reduces mass migration, helps the world’s poorest and makes Britain safer.” In the real world, training a vicious army makes it more efficient at mass killing.

Predictably, the Burmese military intensified its ethnic cleansing of Rohingya. Without cooperation from the Burmese authorities, the UN Human Rights Council established a fact-finding mission: The majority of the “serious human rights violations” and violations of international humanitarian law documented by the mission were “committed by the Myanmar [Burmese] forces, particularly the military.” The military has “deliberately target[ed] civilians.” As the atrocities increased, beginning October 2016 and continuing throughout 2017 and 2018, British media coverage of the UK’s role in training the Burmese military declined from an occasional article to zero.

This is not the first time that Britain’s involvement in ethnic cleansing has been deliberately suppressed by the media: Before, during and after the Sri Lankan government’s killing of 40,000 ethnic Tamils in the final stages of civil war, Britain supplied the arms and training. Mainstream media barely mentioned Britain’s role, restricting its minimal coverage to arms supplies. Sadly, the pattern repeats with the media’s lack of coverage of UK involvement in Burma’s Rohingya slaughter. Perhaps the deadliest propaganda of today is the propaganda of omission.

Source: RT.Com/ Oped By T.J. Coles: Dr T.J. Coles is co-founder of the Plymouth Institute for Peace Research and the author of several books, including Union Jackboot (with Matthew Alford) and Britain’s Secret Wars.