#AceNewsReport – May.30: As the trade war between the United States and China escalates, Beijing may be preparing to play a new card: its control of rare earth minerals: Chinese state media this week issued a warning to the United States that it too has power over global supply chains: That coincided with a thinly veiled threat about rare earths, of which the country is a major exporter, from the government’s top economic planning agency: Here’s what you need to know about rare earths, and how they could play into the trade fight.

Rare earths refer to 17 minerals with magnetic and conductive properties that help power most electronic devices: They are vital to the production of smartphones, tablets and smart speakers: They are not actually “rare,” and can be found in other countries — including the United States. But they’re difficult to mine safely: About a third of the world’s rare earth deposits are found in China: Yet the country controls more than 90% of production, according to the US Geological Survey, in part due to its lower labor costs and less stringent environmental regulations. 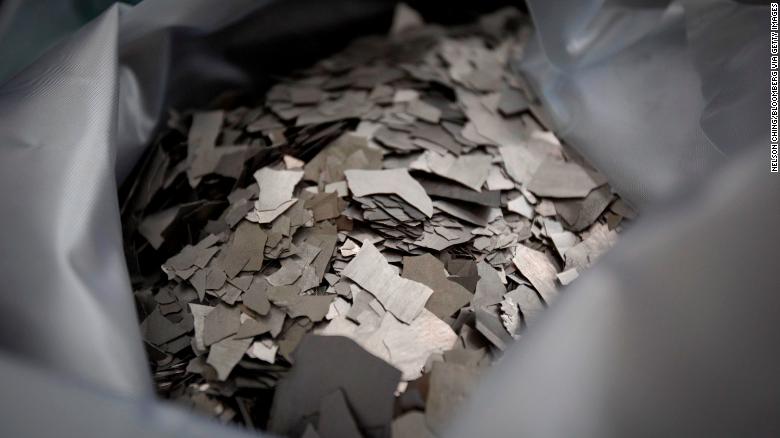 Neodymium, a rare earths mineral, is displayed in China.

In addition to their use in electronics, rare earths are vital to many of the major weapons systems that the United States relies on for national security: That includes lasers, radar, sonar, night vision systems, missile guidance, jet engines and alloys for armoured vehicles, according to a report the Pentagon prepared for President Donald Trump last year………”China has strategically flooded the global market with rare earths at subsidized prices, driven out competitors, and deterred new market entrants,” the report said.

China’s top economic planning agency this week signalled Beijing’s willingness to curb exports of rare earths amid the trade war: “ If anyone wants to use the products made from rare earths exported by China to contain and suppress the development of China, I think … the people of China will not be happy,” the National Development and Reform Commission said in a statement Wednesday, quoting an unnamed official.

Chinese state media also put Washington on notice, publishing a new commentary with words of caution: “Don’t say we didn’t warn you.” “At present, the United States completely overestimates its ability to control the global supply chain and is due to slap itself in the face when it sobers up from its happy, ignorant self-indulgence,” said the column in the People’s Daily, the newspaper of the ruling Communist Party:

Chinese President Xi Jinping also took the step of visiting a rare earths company on a recent trip to Jiangxi province: China has flexed this muscle before. In 2010, following a dispute with Japan over contested islands, China cut off rare earth exports to that country.

Shares in several companies that mine and process rare earths have spiked in recent days: JL Mag Rare-Earth’s stock jumped 10% in Shenzhen on Thursday, the second day in a row the Chinese company’s shares surged the daily limit.

China accounted for 80% of all rare earth minerals imported by the United States between 2014 and 2017, according to the US Geological Survey: That means rare earths have the potential to be a powerful bargaining chip in the ongoing US-China trade negotiations.”If China decides to ban rare earths export to the US, it would produce complex effects, including incurring certain losses on China itself,” the state-run tabloid Global Times said in a column Wednesday. “However, China also clearly knows that the US would suffer greater losses in that situation.”

However, China may not have as much leverage as it thinks: The US maintains stockpiles of many rare earth materials, not least those used in the defense industry: And Beijing’s stronghold on the industry is weakening as the government cracks down on extraction practices that are illegal or carry environmental risk, which had given China a price advantage in the past: The country is also poised to become a net importer of rare earths by 2025 as it looks to fuel its own tech industry: That may make Beijing hesitant to drive up global prices, lest it set the precedent of using rare earths as a political tool.