#AceNewsReport – June.14: A Norwegian tanker in the gulf also reported being hit by three blasts: The US accused Iran of being behind the attacks. Iran said it “categorically” rejected the allegation: The blasts came a month after four oil tankers were damaged in an attack off the coast of the United Arab Emirates: The US blamed Iran for that attack, but did not produce evidence. Iran also denied those accusations: Tensions between the US and Iran have escalated significantly since US President Donald Trump took office in 2017: He abandoned a nuclear deal that was brokered by the Obama administration and significantly tightened sanctions on Iran: Oil prices jumped as much as 4% after Thursday’s incident. The Gulf of Oman lies at one end of a vital shipping lane through which a third of the world’s seaborne oil passes every year.

According to the US account of events, US naval forces in the region received distress calls from the Norwegian-owned Front Altair at 06:12 (02:13 GMT) and from the Japanese-owned Kokuka Courageous at 07:00, following explosions, and moved towards the area.

It said the USS Bainbridge observed Iranian naval boats operating in the area in the hours after the explosions, and later removing the unexploded mine from the side of the Kokuka Courageous: The crews of both vessels were evacuated to other ships nearby. Both Iran and the US later released pictures showing rescued crew members on board their vessels: The operator of the Kokuka Courageous, BSM Ship Management, said its crew abandoned ship after observing a fire and an unexploded mine: The Kokuka Courageous was about 30km (20 miles) off the Iranian coast when it sent its emergency call: The Front Altair was carrying naphtha, a petrol product, from the United Arab Emirates to Taiwan. The Kokuka Courageous was carrying methanol from Saudi Arabia to Singapore.

US Secretary of State Mike Pompeo said at a news conference in Washington: “It is the assessment of the United States that the Islamic Republic of Iran is responsible for the attacks: “This assessment is based on intelligence, the weapons used, the level of expertise needed to execute the operation, recent similar Iranian attacks on shipping, and the fact that no proxy group operating in the area has the resources and proficiency to act with such a high degree of sophistication.”

UK Foreign Secretary Jeremy Hunt said his country’s “starting point” was to “believe our US allies”: “We are taking this extremely seriously and my message to Iran is that if they have been involved it is a deeply unwise escalation which poses a real danger to the prospects of peace and stability in the region,” Mr Hunt said.

Iranian President Hassan Rouhani on Friday accused the US of posing “a serious threat to stability in the Middle East”, without referring directly to the attacks in the Gulf of Oman: He reiterated a call for international parties to the 2015 nuclear deal to honour their commitments, following a unilateral withdrawal by the Trump administration. 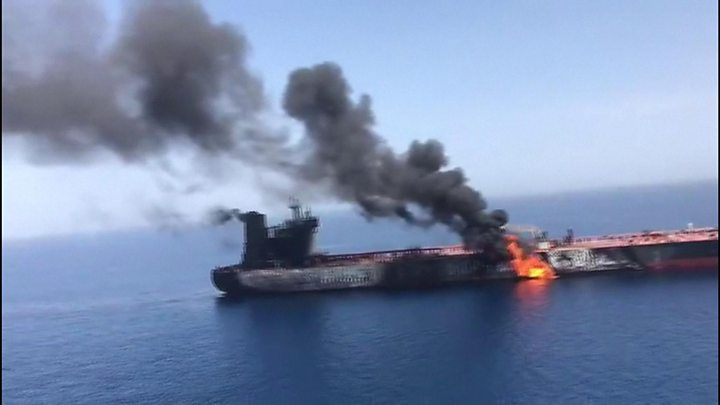 In a statement released on Friday, the Iranian mission to the United Nations said it rejected what it called “unfounded” and “Iranophobic” allegations by the US: “Iran categorically rejects the US’ unfounded claim with regard to 13 June oil tanker incidents and condemns it in the strongest possible terms,” the statement said: Foreign Minister Javad Zarif on Twitter accused the US of making an allegation “without a shred of factual or circumstantial evidence” and attempting to “sabotage diplomacy”.

#AceNewsDesk report ……………Published: June.14: 2019:
Editor says #AceNewsDesk reports & #Brittius says are provided by Sterling Publishing & Media News and all our posts, links can be found at here Live Feeds https://acenewsroom.wordpress.com/ Ace News Services Posts https://t.me/AceSocialNews_Bot and thanks for following as always appreciate every like, reblog or retweet and free help and guidance tips on your PC software or need help & guidance from our experts AcePCHelp.WordPress.Com or you can follow our breaking news posts on AceBreakingNews.WordPress.Com or become a member on Telegram https://t.me/acebreakingnews all private chat messaging on here https://t.me/sharingandcaring