#AceNewsReport – June.17: A top activist in Hong Kong opposing a suspended bill that would allow extradition of residents to the Chinese mainland was freed from prison Monday and promised to join the mass protests taking place in the territory.”Reuters reported that Joshua Wong, a leading voice calling for Hong Kong’s full democracy, said he would continue to fight against what he called an “evil law” and repeated his calls for Hong Kong Chief Executive Carrie Lam to leave her post.” https://t.co/vEa531amar Around two million people protested in Hong Kong on Sunday, seeking the ouster of the leader’s plan to extradite offenders to China though the bill was suspended and she apologised.

Organisers of Civil Human Rights Front estimated the turnout was double the 1 million who took to the streets seven days earlier to demonstrate against the plan: Police estimated that 338,000 followed the protest’s original route: Last Sunday the police estimate was one million in a city of seven million, world’s fourth-most densely populated region. 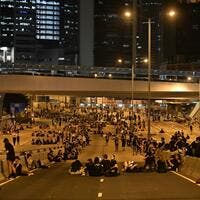 In just one week Hong Kong has witnessed two of its largest ever protests, as well its most violent protest in decades. At the forefront of these demonstrations are young people, many barely out of their teens. How did they get radicalised – and how did they manage to force the government’s hand?

“We screamed at people to run.”

“My parents kicked me out after the protests.”

“It was the first time I got tear-gassed – tears were coming uncontrollably out of my eyes.”

“I’m afraid to give my real name.”

These are not words anybody would have expected to come out of the mouths of Hong Kongers – and certainly not ones aged between 17 and 21: Until recently the stereotype of a “typical” Hong Kong teen would have been one more interested in studying or making money than political activism or creative thinking.

But last week saw the streets around Hong Kong’s legislature taken over by young people wearing masks, setting up barricades, and throwing gas canisters back at police: Many of them were even too young to have taken part in the last Hong Kong protest to hold the world’s media rapt – the 2014 Umbrella protests, when tens of thousands of people slept in the streets for weeks, demanding democratic elections.

No longer certain the system will protect them, they are modifying their protest techniques and learning the art of sophisticated dissent: Every single protester I interviewed who had taken part in Wednesday’s unauthorised protests asked me to protect their identities – fearing arrest.

“We kept face masks on at all times during the protest, and afterwards we tried to delete our records on our iPhones and Google Maps,” says Dan, an 18-year-old student who helped protesters build a barricade with fences: Some have taken to buying paper train tickets, rather than using their prepaid travel cards – on the basis this could make it harder for the authorities to trace their whereabouts: Meanwhile, many have become cautious about what they say on public social media – and are only willing to communicate on secure apps with self-destruct functions, such as Telegram.