#AceNewsReport – June.20: Three men have been found guilty of charges relating to the Garissa University attack in Kenya in 2015: Rashid Charles Mberesero, Mohamed Ali Abikar and Hassan Edin Hassan were found guilty of conspiracy to commit the attack in which four gunmen killed 148 people, mainly students: They were also found guilty of belonging to Somalia’s al-Shabab Islamist militant group: A fourth man, Sahal Diriye Hussein, was acquitted of the charges: All four men are Kenyan nationals BBC News reported. 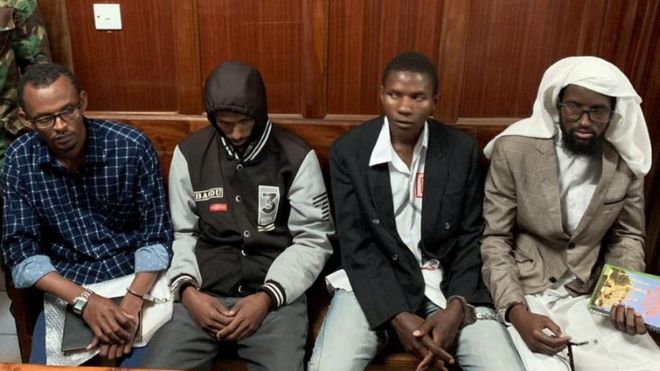 CGTN Africa: Sahal Diriye Hussein, on the far right of the photo, was acquitted of conspiracy to commit the attack and belonging to a militant group

The attack was carried out by al-Shabab, a group affiliated to al-Qaeda, at the north-east Kenyan university in April 2015: Garissa University attack: What happened? It was the second deadliest attack in Kenya’s history, following the al-Qaeda bombing of the US embassy in 1998, which killed over 200 people: By attacking young, future professionals, the massacre aimed to disrupt the country’s socio-economic growth and stability, as well as divide a multi-faith country, analysts say.

The four gunmen were killed at the scene and the man who plotted the attack, Mohamed Kuno, was killed in a raid in Somalia in 2016: Kenyan authorities were criticised for not investigating intelligence in the lead-up to the attack, as well as responding poorly when it occurred.

Emmanuel Ingoza, BBC Africa, Nairobi: Victims of the attack like Anastasia Mikwa still bear visible and hidden scars. The 23-year-old former Garissa University student was shot multiple times in the attack. Despite undergoing 32 surgeries she still relies on care and support from her parents: Today’s judgement will offer little, if any, reprieve to victims like her and their families: There will, however, be a sense of closure for a case that has dragged on for nearly four years: The trial had been beset by changes of magistrates and witnesses not showing up in court; a situation typical of the Kenyan justice system: The ruling today is hugely significant. This was after all the deadliest attack on Kenyan soil since the 1998 US bombings: The conviction is also in some ways a victory for the Kenyan police and prosecutors who have constantly faced accusations of botching high-profile cases like this one: During the attack, gunmen fired indiscriminately as well as singling out and shooting those who identified as Christians.