#AceNewsReport – June.20: Sajid Javid has been knocked out of the Tory leadership race, leaving three contenders vying for the job and to be the next prime minister: The home secretary received 34 votes, coming behind Jeremy Hunt with 59: Michael Gove received 61 votes, leapfrogging Mr Hunt to gain second place; while frontrunner Boris Johnson got 157 votes from MPs: A fifth round of voting will take place between 15:30 BST and 17:30 to select the final two candidates: That result is due at about 18:15 BBC News reported.

The remaining two MPs will go forward into a run-off of the party’s 160,000 or so members, and the winner will be announced in the week of 22 July.

The BBC’s political editor Laura Kuenssberg said: “The question is now, where do Mr Javid’s votes go?…….”His supporters have been an interesting mixed bag so it is not easy to read where they go.”……………Mr Javid is not expected to endorse anyone publicly this afternoon: Leader of the Scottish Conservatives Ruth Davidson – a key supporter of Sajid Javid – said she now wanted Michael Gove in the final two. Ms Davidson is not an MP and therefore does not get a vote in the fifth ballot. 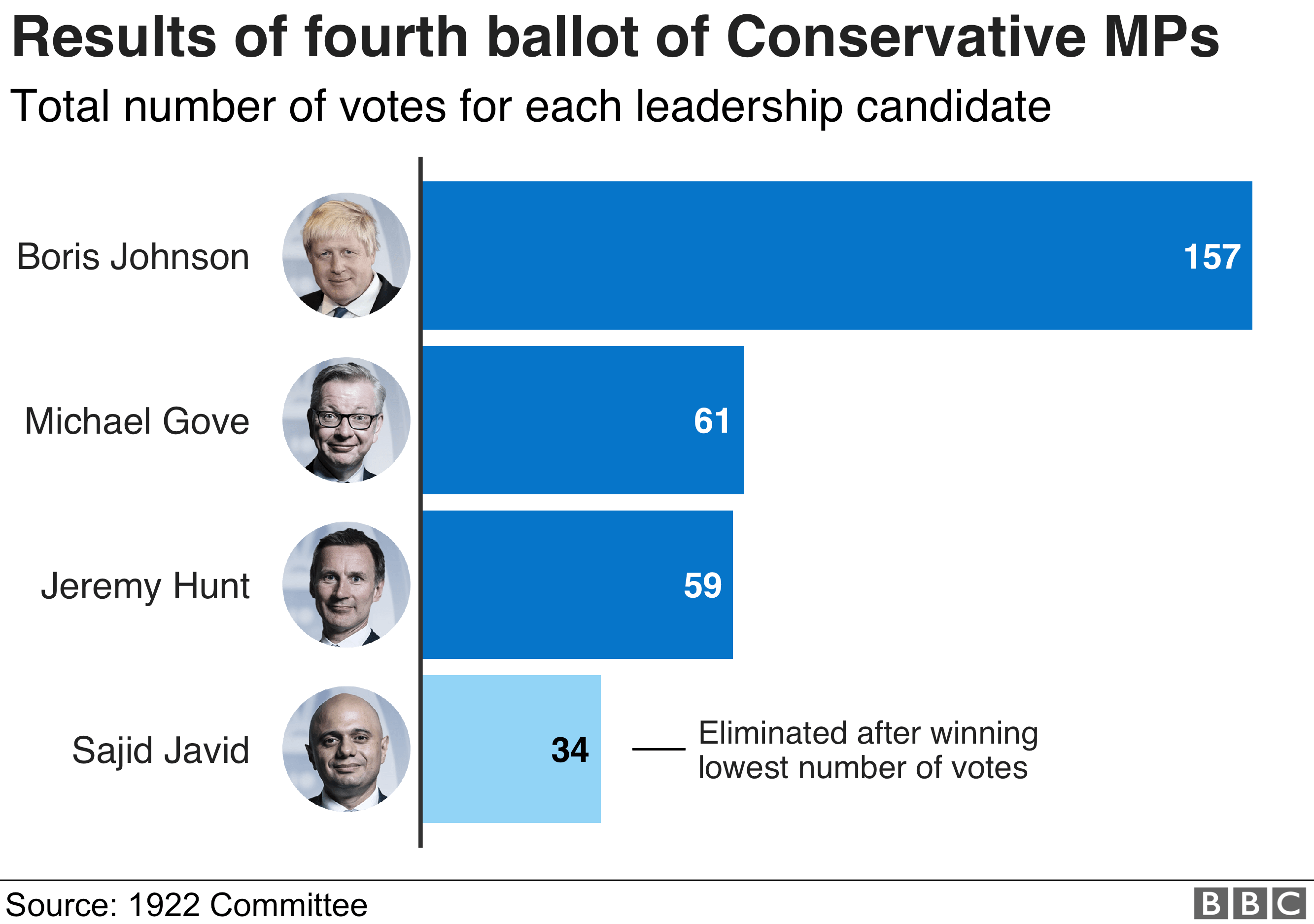 Mr Javid said he was “truly humbled by the support I have received” “If my ambition and conduct in this contest has set an example for anyone, then it has been more than worth it,” he said: “These are very challenging times ahead for our party and our government… the Conservatives must continue to be a broad church.”…….Addressing his comments to “kids who look and feel a bit different to their classmates” he said: “Don’t let anyone try and cut you down to size or say you aren’t a big enough figure to aim high………..”You have as much right as anyone to a seat at the top table.”

Ex-Foreign Secretary Boris Johnson said he was “incredibly grateful” for the support of over half of all Conservative MP, and added “we have much more work to do”.

Environment Secretary Mr Gove jumped into second place, overtaking Foreign Secretary Mr Hunt, who had been second in each of the three previous rounds of voting: Mr Gove said he was “absolutely delighted” adding: “If I make the final two I look forward to having a civilised debate of ideas about the future of our country.”

Jeremy Hunt said: “The critical decision now for all colleagues is what choice do we present to the country……………”Choose me for unity over division, and I will put Boris through his paces and then bring our party and country back together.” A source close to Mr Hunt told the BBC: “Boris and Michael are great candidates but we have seen their personal psychodrama before………………”Jeremy Hunt is the candidate who can best unify the party.”

Of the 313 Conservative MPs who voted, there were two spoilt ballots. 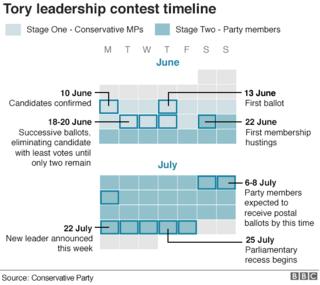