#AceNewsReport – June.28: When the women resisted, they assaulted them, shaved their heads and paraded them through the village: Police say they are searching for five others involved in the incident……………”We were beaten with sticks very badly. I have injuries all over my body and my daughter also has some injuries,” the mother told the ANI news agency………………The women also said that their heads were shaved in front of the entire village. 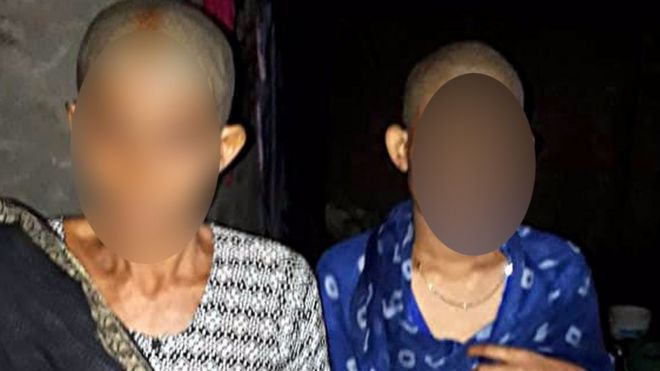 Geeta Pandey, BBC News, Delhi: The attempted rape is a sexual crime, but the subsequent assault, tonsuring the women’s heads and parading them through the village is an assertion of male power in a community, deeply entrenched in patriarchy: What is most worrisome is that the assaulting mob was led by a government official – an elected representative whose job is to look after the welfare of his people, not attack them.

The audacity of the crime shows how in parts of India there’s no fear of law: To begin with, poor marginalised groups find it hard to even convince the police to lodge complaints: Then their cases are shoddily investigated and an overburdened slow-paced judicial system mean the powerful often get away with blue murder: Public anger and outrage, that occurs every time a crime of this nature occurs, is short lived: What is needed is much more consistent action from the authorities, bringing swift justice to the victims of such crimes and restoring the rule of law in remote rural areas of the country.

“Some men entered the victims’ home and tried to molest the daughter,” a police officer told local media, adding that her mother helped her fight off the men: The state’s women commission has also condemned the incident, saying that “further action” will be taken: This is not the first time such an incident has occurred in the state.

However incidents of rape and violence against women continue to be reported from across the country.