#AceNewsReport – June.28: The new record was measured in the southern town of Carpentras. The previous record was 44.1C during a heatwave in 2003 that killed thousands: Schools have been shut and officials are checking on vulnerable people, Mayor Étienne Baudu said: France’s weather service has issued an unprecedented red alert for four areas: Those are all in the south, but most of the country remains on orange alert, the second highest level: The weather service said the new record – measured at 13:48 local time (11:48 GMT) – remained provisional as temperatures could climb higher still: Forest fires have raged through Catalonia: Swathes of the continent are experiencing extreme heat. Germany, France, Poland and the Czech Republic have all recorded their highest-ever June temperatures BBC News reported.

In Spain firefighters are battling Catalonia’s worst wildfires in 20 years: Eight provinces are on red alert while temperatures are expected to rise above 42C in many areas: The Italian ministry of health has reported emergency levels of heat in 16 cities: Full Report Here: https://t.me/acenewsdaily/178798

Several people are believed to have lost their lives as a result of the extreme temperatures, including two who died from suspected heatstroke in Spain: One, a 17-year-old farm worker in Córdoba, went into convulsions after cooling down in the farm swimming pool, while an 80-year-old man died on a street in the northern city of Valladolid. 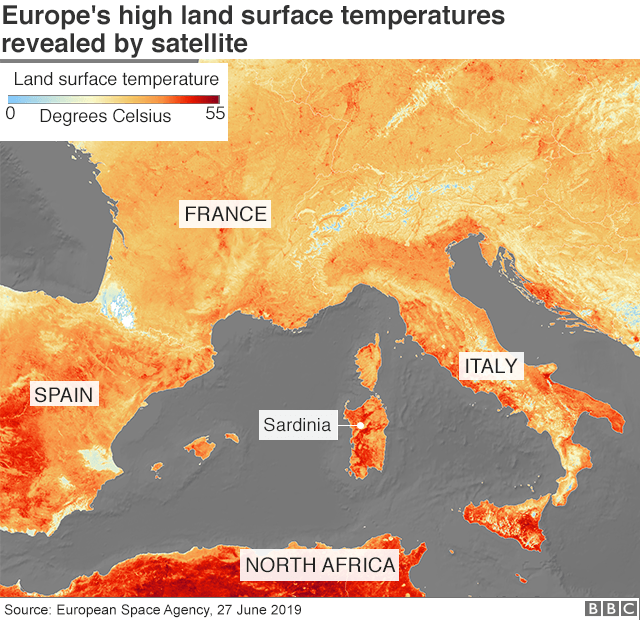 In France Prime Minister Edouard Philippe said a drowning was taking place every day and warned that the heat was making people “take risks”: A six-year-old child was also in a serious condition after being thrown into the air by the force of a water jet from a fire hydrant that had been opened by residents in Saint Denis, north of Paris.