#AceNewsReport – June.29: The trial of the 11 suspects, aged between 18 and 30, which added to tensions in Germany over migration, opened yesterday at Freiburg state court and is scheduled to last until December: Prosecutors say the woman was offered an ecstasy tablet in a nightclub and her drink was spiked with an unknown substance, leaving her unable to fend off the assailants: She reported that several men dragged her into bushed and repeatedly raped her outside: According to reports, eight suspects are Syrian while one is from Algeria, another from Iraq and one is a German national: Local media said that 20 police officers had to bring the defendants to the court benches as they resisted: One suspect was said to have shown his middle finger while shouting: ‘Whoever photographs me will go to hell.’………The alleged ringleader, identified as 23-year-old Majd H, has a criminal record, according to prosecutors. 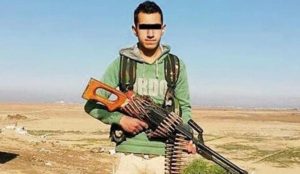 The 18-year-old victim reportedly met Majd H during a night out in a Freiburg techno club on October 13 last year: His lawyer Joerg Ritzel claimed that the victim had consensual sex with all the suspects.

He said: ‘The alleged perpetrator claims that sexual intercourse was not only consensual, but that she massively demanded it.’: Robert Phleps, the lawyer of another defendant, also claimed his client’s innocence using the same allegation, according to reports.

Phleps said: ‘All the accused have claimed that the victim wholly demanded it.’……But prosecutors are certain the incident was not consensual as the victim was crying throughout the alleged gang rape ordeal, according to the indictment….