#AceNewsReport – June.30: Sri Lanka has recruited two hangmen as it prepares to carry out four executions – the first in 43 years: It follows the president’s announcement that four prisoners convicted of drug offences are to face the death penalty: The hanging will end a moratorium on capital punishment that has been in place since 1976: Over 100 candidates responded to an advert posted in February for executioners with “strong moral character”…They needed to be Sri Lankan, male, aged 18-45 and possess “mental strength”

A prisons spokesman said the two successful candidates needed to go through final training which would take about two weeks: The last hangman resigned five years ago after seeing the gallows and going into shock: Another was hired last year but did not show up to work.

In Sri Lanka, rape, drug trafficking and murder are punishable by the death penalty but no executions have taken place since 1976: President Maithripala Sirisena said capital punishment was being reinstated to clamp down on the drugs trade in Sri Lanka: Political analysts say the move will boost his popularity in the lead-up to an election due to take place by the end of the year. 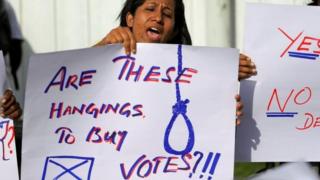 Reuters: Protesters accuse the president of using capital punishment to garner popularity among voters: “I have signed the death warrants of four,” President Sirisena said: “ They have not been told yet. We don’t want to announce the names yet because that could lead to unrest in prisons.”……………He said there were 200,000 drug addicts in the country and 60% of prisoners were in jail due to drugs charges.

Along with the UK, France and Norway, the EU has condemned Sri Lanka’s decision to revive capital punishment: “The death penalty is a cruel, inhuman and a degrading punishment, and the EU unequivocally opposes its use in all circumstances and all cases,” the EU statement said. “While the Sri Lankan authorities have cited the need to address drug-related offences, studies show that the death penalty fails to act as a deterrent to crime.”

Amnesty International said it was “shocked” and “outraged” by the president’s announcement and argued that executions for drug-related offences were unlawful because they did not meet the threshold for “most serious crimes”, such as intentional killing: “At a time when other countries have come to the realisation that their drug control policies are in need of reform, and are taking steps to reduce the use of the death penalty, Sri Lanka is bucking the trend,” said Biraj Patnaik, AI’s South Asia director: In the briefing, Sri Lanka: Halt Preparations to Resume Executions, Amnesty International highlights how the death penalty in Sri Lanka is being used in circumstances that violate international law and standards, has failed to act as a unique deterrent to crime in other countries, could claim the lives of people who may have been convicted through unfair trials, and could disproportionately affect people from minority and less advantaged socio-economic backgrounds: “This will be devastating to the country’s international reputation and we hope that President Sirisena will reconsider his decision,” he added.