#AceNewsReport – July.01: Tens of thousands of pro-Beijing protesters are rallying in support of the police in Hong Kong: The demonstrators, dressed in white and blue and waving Chinese flags, oppose the anti-extradition protests that have taken over the city this month: Two record-breaking rallies were held against a proposed law that would see suspects extradited to mainland China: On 12 June police used tear gas and rubber bullets to disperse crowds – the worst violence in the city in decades: Hong Kong’s justice secretary Teresa Cheng later ruled out an investigation into police brutality: However, the demonstrations forced the government to apologise and suspend the planned bill.

Local media say about 165,000 pro-Beijing protesters turned up to the rally in Tamar Park on Sunday: This is far fewer than the number of people who protested against the extradition bill – activist groups put the figure at about two million for the latest rally: However it is a sign of significant pro-Beijing movement in the territory. 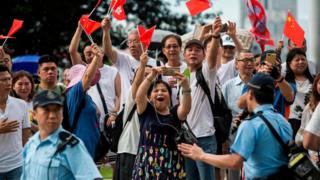