#AceNewsReport – July.01: Iran has breached a 300kg (660lb) limit on its stockpile of enriched uranium set under a 2015 nuclear deal with world powers, sources say: The Fars news agency reported that the International Atomic Energy Agency had measured the stockpile on Monday: In May, the country quadrupled its production of the material, which is used to make nuclear reactor fuel – and potentially nuclear weapons: It was responding to sanctions reimposed by US President Donald Trump: European nations have warned Iran that any violation will bring consequences. 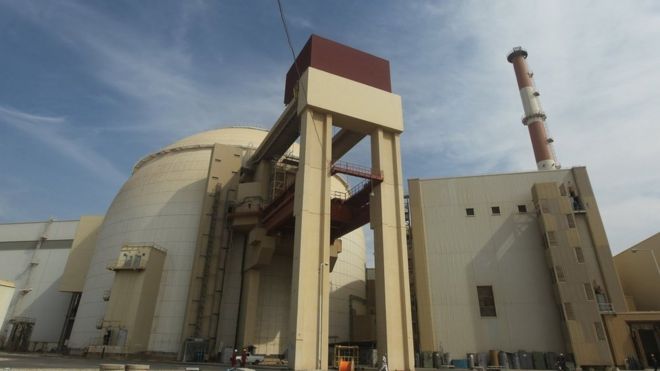 If the breach is confirmed by the IAEA, the deal allows for the re-imposition of multilateral sanctions that were lifted in return for Iran limiting its nuclear activities: The development comes at a time of high tension in the Middle East, with Iran shooting down a US drone over the Strait of Hormuz in disputed circumstances, and the US accusing Iran of being behind two sets of attacks on oil tankers: Why does the enriched uranium stockpile matter?

Enriched uranium is produced by feeding uranium hexafluoride gas into centrifuges to separate out the most suitable isotope for nuclear fission, called U-235: Under the nuclear deal, Iran is only permitted to produce low-enriched uranium, which has a 3-4% concentration of U-235, and can be used to produce fuel for nuclear power plants: Weapons-grade uranium is 90% enriched or more: The deal also restricted Iran to stockpiling no more than 300kg (660lbs) of the low-enriched uranium: A stockpile of 1,050kg, however, could be further enriched later into enough material to build one bomb, according to the Arms Control Association: Iran strongly denies any intention to build nuclear weapons.

The Iranian economy has slumped since the US withdrew from the nuclear deal in May 2018 and began reinstating sanctions targeting its oil and banking sectors: Mr Trump said the deal was flawed and that he wanted to force Iran’s government to renegotiate the terms – something it refused to do.

In May, after the US ended exemptions from penalties for countries still importing Iranian oil – and those exchanging surplus Iranian low-enriched uranium for ore concentrate – Iranian President Hassan Rouhani announced that it would no longer comply with the 300kg enriched uranium cap.

The nuclear deal is likely to collapse if Iran is found to be in “material breach” as a result of it violating the stockpile limit or other restrictions on uranium enrichment: After 30 days, any of the other parties would be able to “snap back” the UN sanctions lifted under Security Council resolution 2231, which endorsed the deal. Such a step cannot be vetoed.

Iran’s threat to enrich uranium beyond 3.67% is also a major concern from a proliferation standpoint: Iran insists its nuclear programme is peaceful, but experts say 20% enriched uranium is most of the way to weapons-grade uranium. That is because going from uranium’s natural state of 0.7% concentration of U-235 to 20% takes approximately 90% of the total effort required to get to weapons-grade.

The Arak reactor is also a proliferation risk because if it is not redesigned it will produce spent fuel containing plutonium, which could be used for a nuclear bomb.