#AceNewsReport – July.02: In a written statement following a preliminary hearing at Utrecht District Court, prosecutors said 37-year-old suspect Gokmen Tanis left a handwritten letter in a getaway car that said in Dutch: “I’m doing this for my religion, you kill Muslims and you want to take our religion away from us, but you won’t succeed. Allah is great.”…Gokmen Tanis: “I’m doing this for my religion.”

Dutch prosecutors: “He may be a terrorist, but we’re sure he is mentally ill: ‘He will shortly be admitted to a specialist center to undergo psychological observation.’ After all, what sane person would do such a thing? And we will keep on trying to figure out his motive: ‘Prosecutors said their investigation will continue in an effort to determine what exactly happened in and around the tram, Tanis’ motive…’”……………

Gokmen Tanis: “I’m doing this for my religion.” 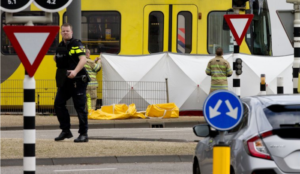 Prosecutors added that their suspicions of a terrorist motive also stem from two statements Tanis gave to an investigating judge before refusing to answer any further questions, and from the fact that he opened fire on people he did not know in a tram…………….He will shortly be admitted to a specialist center to undergo psychological observation, prosecutors said: His trial is expected to start early next year.

Prosecutors said their investigation will continue in an effort to determine what exactly happened in and around the tram, Tanis’ motive and the possible involvement of others, though they added that he said he acted alone….