#AceNewsReport – July.02: Police in the Philippines have boosted security in Manila following a bombing at a military camp in the country’s troubled south, an official said on Saturday: Five people were killed and 12 wounded in the attack on an army camp in Indanan town in Sulu province, 1,000km south of the capital, on Friday….The military said the kidnap-for-ransom group and IS-affiliate Abu Sayyaf was probably behind the midday blast on the island of Jolo. 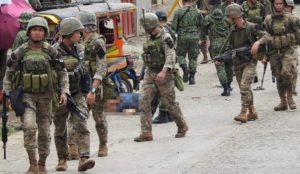 #IslamicState claimed the bombing was the work of two suicide attackers, according to tweets from Rita Katz, the director of SITE Intelligence Group which monitors extremist activities worldwide: The country is home to numerous armed groups, several of which are linked to the decades-old insurgency aiming to create a Muslim homeland in the Christian-majority nation’s deep south….

Three members of the military unit were killed and nine others were wounded, while two civilians – a male tricycle driver and female street vendor – also died in the attack, said army spokesman Colonel Ramon Zagala……..