#AceNewsReport – July.03: Yet not one of them has been prosecuted. In the London Bridge jihad attack, “suspects had been arrested but not charged.” Meanwhile, “more than a dozen people were prosecuted for membership of the neo-Nazi terrorist group National Action.”

Why the disparity? Because the authorities can safely prosecute neo-Nazis without fearing that such prosecutions will bring them charges of “racism” and “Islamophobia.” But the Muslim community in Britain has them so cowed and intimidated that they don’t dare move against jihadis: And that, in the long run, will be the death of Britain. 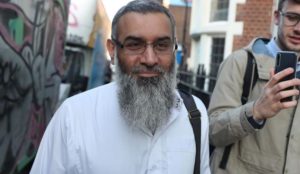 “Police admit failing to prosecute Islamists for membership of UK’s ‘most dangerous extremist group,’” by Lizzie Dearden, Independent, June 29, 2019 (thanks to Paul):

No one has ever been prosecuted for membership of the UK’s ‘most dangerous Islamist group’ despite followers launching numerous terror attacks, it can be revealed: Supporters of Anjem Choudary’s al-Muhajiroun (ALM) organisation carried out atrocities including the London Bridge attack, 7/7 bombings and murder of Lee Rigby, while others fought for Isis, al-Qaeda and the Taliban abroad.

The government banned ALM as a terrorist group in 2006, making membership a criminal offence punishable by up to 10 years in prison: But a senior counter-terror officer admitted that despite police identifying 600 current or former associates, none of them have been prosecuted for membership.

The Metropolitan Police officer, who is codenamed Witness M because of an anonymity order, told inquests into the London Bridge attack that suspects had been arrested but not charged: The coroner at the London Bridge inquest today cleared M15 and the police for missing opportunities to prevent the attacks, even though ringleader Khuram Butt had been monitored by security services as a known member of ALM.