#AceNewsReport – July.03: Emanuela Orlandi was 15-years-old when she went missing in 1983 on her way to a flute lesson in central Rome: Although police believed it to be a simple abduction and murder, the case led to wild speculation of a Vatican cover-up in the Italian media for many years RT News reported.

This is partly why the mysterious, anonymous tip quickly made headlines and reignited interest in the case despite the fact that nearly 40 years have passed since Emanuela’s disappearance. 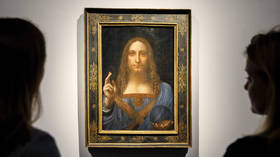 Disputed Da Vinci painting shows up on Saudi crown prince’s superyacht — report
The unsigned letter contained only the phrase: “Look where the angel is pointing,” along with a photo of a marble statue of an angel above a prince’s tomb in a Teutonic cemetery in the Vatican, which is reserved for Church figures of German or Austrian origin: While it might sound like something from ‘The Da Vinci Code,’ the desperate family is ready to follow any possible lead to find out the truth, and petitioned the Vatican to unseal the tombs.

Vatican spokesman Alessandro Gisotti announced on Tuesday that it would indeed look, answering the family’s request in an effort to put their decades of uncertainty to rest: The Orlandis, their lawyers and members of the Holy See will all gather on July 11 to witness the opening of the tombs. Initial investigations reveal that they have been opened at least once since they were first sealed.

“After 35 years of lack of cooperation, the start of an investigation is an important breakthrough,” Pietro Orlandi, Emanuela’s brother, told local news site ANSA: Whether or not Emanuela is found, the unsealing of the tombs shows that all hope has not yet been lost, and that the Orlandis might still learn of Emanuela’s fate.