#AceNewsReport – July.03: Images from the ground showed piles of rubble left where the buildings had been, while emergency crews worked to remove both the wounded and the dead: The UN Refugee Agency posted to its official Twitter page that it was “extremely concerned” about the news of the airstrikes targeting the Tajoura detention centre.

The drastic impact of the battle for Tripoli is even visible from space, with satellite imagery showing large swathes of the city now cloaked in darkness. Meanwhile footage and photographic evidence we have gathered and verified from the ground show that civilian areas, homes and infrastructure are bearing the brunt of the damage.

In a statement, the UN-recognised Government of National Accord (GNA) in Tripoli condemned the “horrific crime,” blaming the leader of the opposition Libyan National Army (LNA) who are currently assaulting Tripoli:

There is currently no independent confirmation on who was responsible for the attack: In their statement following the attack, the GNA said the airstrike on the center had been intentional and constituted a “war crime.”

“We ask the international community through the African Union, European Union and (other) organizations to take a firm and clear stance against these continued violations,” the statement said: The United Nations envoy to Libya, Ghassan Salame, condemned the attack “in the strongest terms,” adding that it “clearly amounts to a war crime.”

Italy’s Foreign Ministry and the African Union have also condemned the strike. 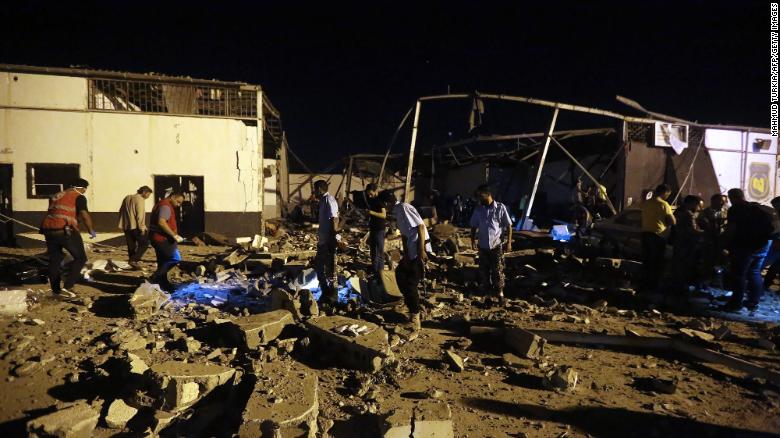 Emergency workers and other recover bodies after an airstrike killed nearly 40 at Tajoura Detention Center, east of Tripoli on early July 3.

There has been no response from the opposition LNA yet: CNN has reached out to the LNA for comment: Armed conflict in and around Tripoli escalated on April 4, when General Khalifa Haftar and his LNA launched an offensive to capture the Libyan capital from the UN-recognised government: Defending the capital are disparate Islamist militia that prop up the UN-recognised transitional government. 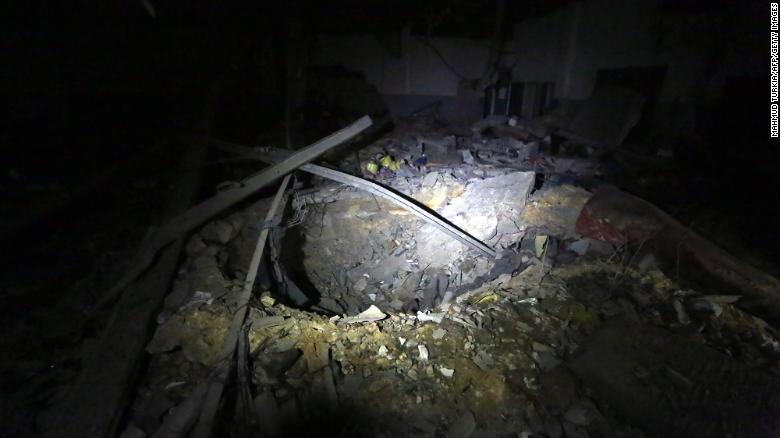 The point of impact of a bomb is seen inside Tajoura Detention Center after an airstrike killed nearly 40, east of Tripoli on early July 3.

“The drastic impact of the battle for Tripoli is even visible from space, with satellite imagery showing large swathes of the city now cloaked in darkness,” said Magdalena Mughrabi, Deputy Middle East and North Africa Director at Amnesty International, in a statement Wednesday: The United Nations Security Council has voted to impose an arms embargo against Libya until June 2020, saying that there is “no military solution” to the ongoing conflict: But Amnesty International said that the embargo is not being properly enforced and has accused Jordan, the United Arab Emirates and Turkey of flouting the ban:

US Senator Bob Menendez sent a letter to Secretary of State Mike Pompeo on Sunday expressing “deep concern” about reports that the UAE had transferred “US-origin Javelin missiles” to Haftar: On Tuesday, the Emirati Ministry of Foreign Affairs denied ownership of weapons found in Libya, and said it remained committed to the UNSC resolution on Libyan sanctions and the arms embargo. The foreign ministry statement didn’t mention Menendez’s letter.