#AceNewsReport – July.05: One of the three men arrested during counterterrorism raids in Sydney’s west on Tuesday morning was planning an attack on prominent Harbour City buildings, police allege: Isaak el Matari, 20, was taken into custody on Tuesday as part of the operation, which targeted suburbs including Canada Bay, Chester Hill, Greenacre, Green Valley, Ingleburn and Toongabbie: Police allege he had a range of targets in Sydney, including police stations, consulates, courts, and churches: Two other men, aged 23 and 30, were also arrested as part of the operation led by the NSW Joint Counter Terrorism Taskforce (JCTT). Two men are taken to hospital after being stabbed at a house in Chippendale, with police saying it is believed all those involved all knew each other and the attack related to a personal issue between them: July 05, 2019 at 06:16PM https://ift.tt/2LFEIar 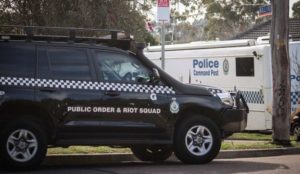 More on this story. “Police arrest three in Sydney counterterrorism raids, accuse one of planning attack,” ABC.net.au, July 2, 2019 (thanks to dumbledoresarmy):

Police allege Mr el Matari and the 23-year-old identified as members of #IslamicState: Mr el Matari was expected to be charged on Tuesday with preparing a terrorist act and traveling overseas to engage in hostile activities: Both offences carry a maximum penalty of life in prison: Police will allege Mr el Matari had made early-stage preparations and had expressed an intention to carry out a terrorist attack in Australia.

The JCTT comprises both NSW Police and AFP officers: AFP assistant commissioner Ian McCartney said Mr el Matari had been monitored since returning from Lebanon last year: “We will also allege this man had indicated he was willing to travel to Afghanistan to fight for Islamic State, and he made a number of preparations to do so,” he said.

NSW Police assistant commissioner Mick Willing said the arrests represented the “16th disruption” since terror threat levels were raised in 2014: “There are people out there who still want to commit acts of terror in this country, sadly, but we’re doing everything we can to prevent those acts of terrorism taking place and public safety is always our first priority,” he said: Police said the 23-year-old, from Toongabbie, would be charged with being a member of Islamic State….