#AceNewsReport – July.07: They were released on the same day the UN published a report by its human rights chief Michele Bachelet detailing alleged rights abuses in the country: Ms Bachelet had separately asked President Nicolás Maduro to release the prisoners, her spokesperson said: Venezuela said that Ms Bachelet’s report was biased.

Reuters: Judge Maria Afiuni pictured outside her house after news of her release broke on Friday.

The 16-page document highlighted the arbitrary arrest, ill-treatment and torture of government critics. It also accused the state of removing numerous opponents by extrajudicial killings: The UN said the prisoner releases may mark a new beginning for the Maduro government on human rights issues, but many were sceptical. 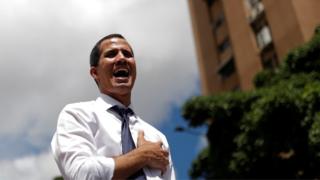 Venezuela remains gripped by a long-running and highly polarised crisis: Pro-government celebrations took place for independence day on Friday, while supporters of opposition leader Juan Guaidó rallied in the capital, Caracas: Mr Guaidó called for citizens to march on the headquarters of secret services to protest against the brutal killing of a detained naval officer last month, but few joined the demonstration.

Ms Afiuni, the newly-freed judge, told news site La Patilla that she was surprised by her release and looked forward to rebuilding her life after nine years in detention: She was detained in 2010, when the country was ruled by President Hugo Chavez and his opposition considered her to be a major political prisoner: Chávez objected to her releasing a businessman who was accused of corruption. She insisted he had been detained for too long without trial. Part of her time in detention was under house arrest after she claimed she was raped in prison. In March 2019, a court sentenced her to five years: Mr Jatar was jailed in 2016, after reporting on a protest against President Maduro on Margarita Island. He was later accused of money-laundering. On Twitter on Friday, he said he had only been granted partial freedom, as he has been told to stay in his home state and report to authorities once a fortnight. 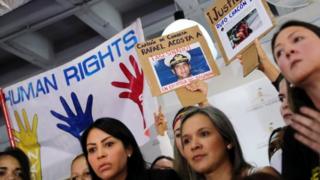 Reuters: A human rights protest in Caracas on Thursday

Twenty students were also among those said to have been freed on Thursday, and 62 prisoners were released last month: Last week, a Venezuelan navy captain died in custody, amid allegations that he had been tortured. Rafael Acosta, 49, was arrested over an alleged plot to assassinate President Nicolás Maduro: Two men, Lt Ascanio Tarascio and Sgt Estiben Zarate, have been charged with murder.