#AceNewsReport – July.09: And in May, 39 bricks with an estimated value of more than $4m (£3m) were found by fishermen: Police have said it’s possible the drugs were bound for Australia, where there’s strong demand for cocaine: But as yet there’s no definitive answer as to why these tightly bound drug packets are appearing along the coast. 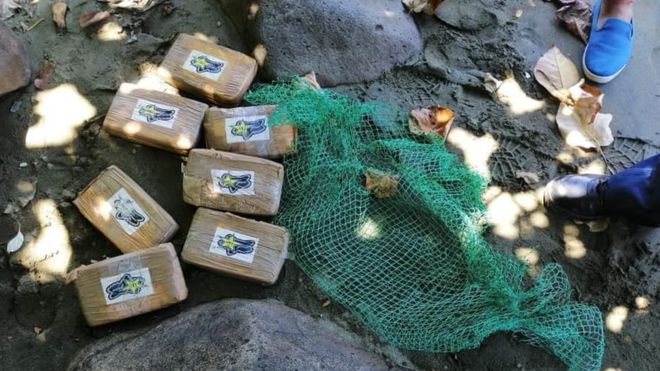 Mauban police: The latest haul was found off a beach in Quezon province

On Sunday, a family having a picnic by the sea in Mauban municipality in Quezon spotted seven objects floating near the shore: They collected them and after realising what they might be, fish vendor Ruel Perez immediately called the police: Quezon Police director Police Col Ramil Montilla told the Manila Bulletin the packages contained a white substance, were wrapped with tape and bore an energy drink logo: The contents is still being tested, but Col Montilla said if it were found to be cocaine it would have a street value of about 35m pesos ($682,000; £540,00). 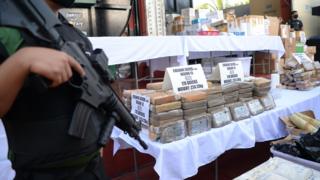 AFPCocaine is not a common drug in the Philippines, which has severe anti-drug penalties: That’s small compared to a string of finds in February, when over the span of a one week, cocaine bricks estimated at 472m pesos were found along the shores of four provinces – Dinagat Islands, Surigao del Norte, Camarines Norte and Quezon.

The move prompted police in the Caraga region where Surigao del Norte is located, to offer residents a sack of rice in exchange for every brick of cocaine handed in. According to the Philippine Statistics Authority, one kilogram of rice costs around $0.68 (£0.54): Then in May, fishermen found 39 blocks of cocaine when they were out fishing in the waters off Sorsogon province.

“There are several reasons why,” said Sanho Tree, a fellow at the Drug Policy Project at the Institute for Policy Studies, a US-based think tank: “Sometimes speed boats will toss cargo overboard if they are being chased to destroy evidence and currents could have brought it to the Philippines.”According to Mr Tree, the bricks could also have been part of a shipment lost by smugglers mid-handover: “Sometimes they’ll submerge drug packages underwater with a net and anchor for pickup, but packages can sometimes break free.”But the Philippine Drug Enforcement Agency believes the “floating cocaine” was used by drug syndicates as a diversion tactic.

“While all government forces are focused on operations to retrieve the floating cocaine, we believe drug syndicates may take the opportunity to smuggle shabu,” PDEA Director General Aaron N. Aquino had said in a statement in February: Shabu is the Filipino term used to describe crystal meth – one of the most common drugs in the Philippines: It has been the focus of President Rodrigo Duterte’s brutal “war on drugs” in the Philippines, under which thousands of drug users and suspected dealers have been killed by both police and vigilantes: Yaba: The cheap synthetic drug convulsing a nation : Mr Aquino said cocaine was “not a drug of choice here in the Philippines. [The smugglers] were willing to sacrifice cocaine to smuggle shabu,” said

The head of the Philippine National Police, Oscar Albayalde, however, has said it’s unlikely that a dealer would use such an expensive tactic: According to the state’s Philippine News Agency (PNA), he said it was more likely that the cocaine bricks had been dumped – which would sit with Mr Tree’s theories.

In September last year, 500kg of cocaine with a street value of up to $300m was recovered by police in the Solomon Islands: It’s possible that the latest finds were part of a haul destined for Australia, but were dumped into the sea as the dealers evaded police pursuit.

“They may have dumped the drugs because they were being pursued by the Papua New Guinea navy,” Mr Albayalde told news site CNN Philippines: “The probability is that they were supposed to be delivered to Australia because the market is good there for cocaine,” PNA reported him as saying.