#AceNewsReport – July.14: Organisers have associated this Sunday’s protest with the symbolism of Bastille Day; this year marks the 230th anniversary of the storming of the Bastille, which started the French Revolution: The wave of yellow vest rallies started in France in mid-November over planned hikes in fuel taxes. While the French government has abandoned its plans to raise fuel taxes and introduced other measures to improve the country’s socioeconomic situation, protesters continue to take to the streets across France every weekend for demonstrations to express their discontent with government’s policies: LIVE: #YellowVests hold protest in #Paris on #BastilleDay2019 (video) https://t.co/iODOUp6O9i pic.twitter.com/UXysnTfzUG — Sputnik (@SputnikInt) July 14, 2019: Riot police and anti-government protesters faced off during Bastille Day celebrations in Paris: Dozens of people were arrested, with calls for president Emmanuel Macron to resign again being chanted out loud: RT World News https://ift.tt/2xKdNBZ 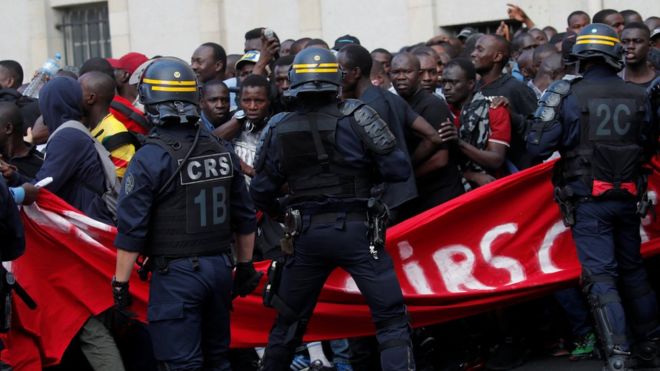 Reuters” Undocumented migrants are surrounded by police during the protest

Hundreds of undocumented migrants have stormed the Panthéon in Paris and demanded the right to remain in France: The protesters, who were mainly from West Africa, surged into the building at around midday (11:00 GMT) on Friday.

Tourists were evacuated from the mausoleum, where many of France’s most famous figures are buried: The group called themselves the “black vests” – a reference to the yellow vest protest movement that spread through much of France earlier this year: They waved papers in the air, chanted, and demanded to hold talks with Prime Minister Édouard Philippe over their immigration status:

In a statement, the protest group described themselves as “the undocumented, the voiceless and the faceless of the French Republic” “We don’t want to negotiate with the interior minister and his officials any more, we want to talk to Prime Minister Édouard Philippe now!” it said.

Between 200 and 300 migrants took part in the protest, a police spokesman told Reuters news agency. There were 37 arrests made: But other estimates – from activist groups and witnesses – said as many as 700 people were involved in the demonstration.