#AceNewsReport – July.19: Japanese police have named the suspect in a fatal fire at an animation studio as 41-year-old Shinji Aoba, local media report: He is in custody, but has not been formally arrested, Japanese media say: He is being treated in hospital for burns, and police say he will be questioned after his recovery.The Kyoto Animation company building where 33 people were killed in an arson attack did not have any sprinklers or indoor hydrants installed since they were not legally required by the fire code, a Kyoto Fire Department official said on Friday: The official said that because the building was classified as an “office”, it was not required to have such equipment: https://t.me/reuters_news/90613

Mr Aoba is suspected of deliberately setting the fire: Dozens of people have gathered outside the premises of the studio, also known as KyoAni, laying flowers and offering prayers: A crowdfunding campaign has also raised more than $1.3m (£1.04m) to assist victims and their families: KyoAni produces films and graphic novels, and is well regarded by fans for the quality of its productions. 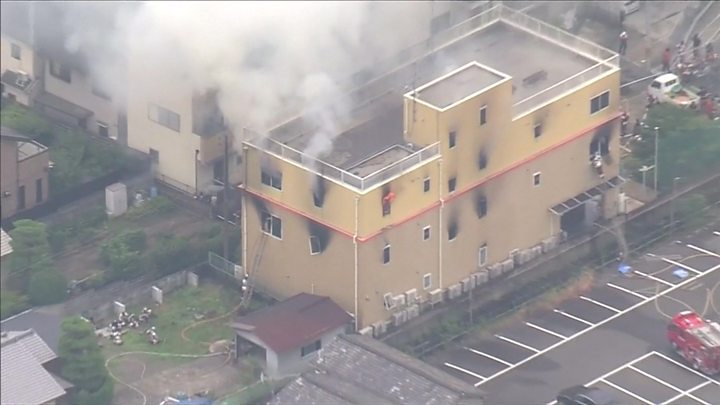 BBC reported: The fire broke out at the three-storey building at about 10:30 local time (01:35 GMT) on Thursday: Eyewitnesses described a loud explosion followed by the blaze, which people jumped out of windows to escape from: “It was like I was looking at hell,” a local woman told Asahi Shimbun newspaper: Around 70 people were in the building when the fire started, and some 36 people have reportedly been taken to hospital: Authorities said most of the victims were found piled up on a stairway leading from the building’s third floor up to the roof, where they collapsed trying to escape: Kyodo news agency said firefighters had found the door to the roof was shut, leaving people trapped inside: The blaze has since been put out, and police are searching the site for evidence in their investigation: Knives have also reportedly been found at the scene.

In response to the incident, the studio has cancelled screenings for the trailer of its latest film, a spin-off of the popular swimming anime series Free: It has also delayed a collaboration with Keihan Main Line, a railway service between Kyoto and Osaka: Another Japanese animation studio, David Production, has postponed the broadcast of its latest episode of Fire Force: The animated series centres on a group of firefighters who have the ability to manipulate fire.