#AceNewsReport – July.20: Hong Kong police are investigating whether a haul of explosives found there is linked to ongoing protests: The police said it was the biggest seizure of the explosive TATP they had ever made: Other weapons and protest leaflets were also found on Friday: The find came ahead of a weekend of mass protests by both pro- and anti- China demonstrators in Hong Kong: A 27-year-old man was arrested and was reportedly a member of a pro-independence group.

Officers discovered the haul when they entered an industrial building in the Tsuen Wan district at about 22:30 local time (14:30 GMT) on Friday evening: They said they found 2kg (4.4lb) of the highly volatile TATP, as well as 10 petrol bombs, acidic substances, weapons including knives and metal rods, and gas masks and goggles, the South China Morning Post reported. 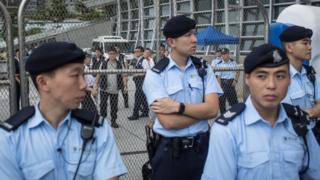 Getty ImagesPolice resources have been stretched by the extent of the protests: The Post quoted Superintendent Alick McWhirter of the Explosive Ordnance Disposal unit as saying: “TATP is well known, unstable and dangerous. I think without a doubt this is the largest seizure we have ever come across in Hong Kong.”…………..He said it was taking officers time to handle the TATP as it was in “different stages of its manufacture”, creating a “constant challenge”…………TATP can be easily made from readily available materials and was used in such attacks as the 2005 London bombings and the 2015 Paris attacks: Also found in Tsuen Wan were banners and leaflets opposing the extradition bill and a T-shirt bearing the logo of the pro-independence Hong Kong National Front group.

He has not been named officially: He is apparently still being questioned and has not yet been charged: The Hong Kong National Front said in a post distributed on the Telegram app that the man was a member of the group, but that the group knew nothing of the explosives.

The BBC’s China correspondent Stephen McDonell, in Hong Kong, said the arrest would be interpreted by some as a sign that the democracy movement includes those turning to more violent means.

They were sparked by the proposed extradition bill that would have allowed people to be sent to China for trial: Critics said it would undermine Hong Kong’s judicial independence and could be used to target those who spoke out against the Chinese government.

After weeks of regular mass protests the Hong Kong government suspended the bill, but this has not halted the demonstrations, which now reflect broader demands for democratic reform and concerns that Hong Kong’s freedoms are being eroded: Tens of thousands came out on to the streets last Sunday, leading to some violent clashes.

Hong Kong, a former British colony, is part of China but run under a “one country, two systems” arrangement that guarantees it a level of autonomy: It has its own judiciary, and a separate legal system, compared to mainland China.

Pro-Beijing protesters are also planning to gather this weekend to show their support for the Hong Kong government and the police force.