#AceNewsReport – July.22: Late on Friday night, the Twitter account of London’s Metropolitan Police Service began tweeting unusual announcements. “XEON IS THE BEST FIGHTER IN SCOTLAND,” it proclaimed, alongside the challenge: “what you gonna do phone the police?” 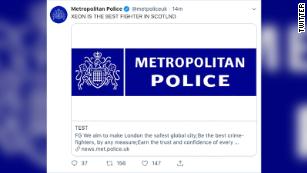 At intervals of a few minutes or less, the tweets were scattered with profane language and formatted sporadically with capital letters and confusing signatures like “F*** THE POLICE FREE DA GANG” and “no comment get my lawyer”: Both the force’s social media and website had been hacked, Met Police told to CNN. The same “unauthorized messages” had been emailed to subscribers, according to a press statement later posted to the Met Police website—after regaining control that same evening.

According to the statement, the hackers exploited a linked system that issues content to multiple platforms automatically: “The Met Police Press Bureau uses an online provider called MyNewsDesk to issue news releases and other content. When a story is published via MyNewsDesk, it appears on the Met’s website and Twitter accounts and generates an email to those who’ve subscribed to receive our news updates.”……The police statement emphasized that no other systems had been compromised by the loquacious infiltrators. “At this stage, we are confident the only security issue relates to access to our MyNewsDesk account. There has been no ‘hack’ of the Met Police’s own IT infrastructure,” it said.

“We are assessing to establish what criminal offences have been committed,” it added: The tweets have since been removed.

As a precaution we are also temporarily using the official Met Twitter account @MPSOnTheStreet rather than our main account @MetPoliceUK, but we are working to resume service on the main account as soon as possible:

We apologise to our subscribers and followers for the messages they have received.