#AceNewsReport – July.23: Boris Johnson has been elected new Conservative leader in a ballot of party members and will become the next UK prime minister: He beat Jeremy Hunt comfortably, winning 92,153 votes to his rival’s 46,656: The former London mayor takes over from Theresa May on Wednesday: In his victory speech, Mr Johnson promised he would “deliver Brexit, unite the country and defeat Jeremy Corbyn”.Speaking at the Queen Elizabeth II centre in London, he said: “We are going to energise the country: “We are going to get Brexit done on 31 October and take advantage of all the opportunities it will bring with a new spirit of can do: “We are once again going to believe in ourselves, and like some slumbering giant we are going to rise and ping off the guy ropes of self doubt and negativity.”

Mr Johnson thanked his predecessor, saying it had been “a privilege to serve in her cabinet”. He was Mrs May’s foreign secretary until resigning over Brexit: The outgoing PM – who is standing down after a revolt by Conservative MPs over her Brexit policy – congratulated her successor, promising him her “full support from the backbenches”. 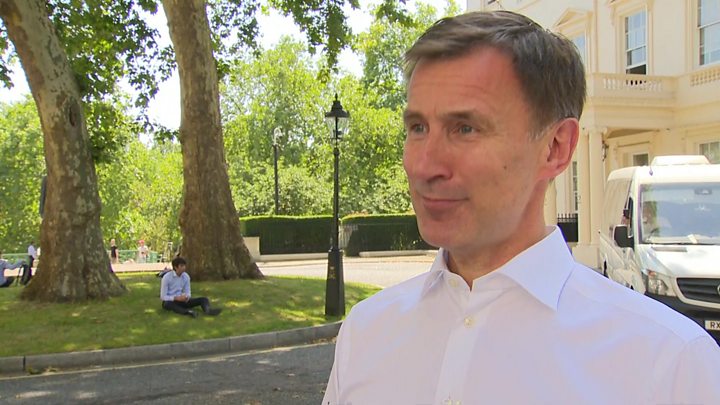 Jeremy Hunt: ‘My remain vote was a hurdle we couldn’t overcome’

Foreign Secretary Mr Hunt said he was “very disappointed”, but Mr Johnson would do “a great job”. He said he had “total, unshakeable confidence in our country” and that was a valuable quality at such a challenging time.

Mr Hunt added: “It was always going to be uphill for us because I was someone who voted Remain and I think lots of party members felt that this was a moment when you just had to have someone who voted for Brexit in the referendum: “In retrospect, that was a hurdle we were never able to overcome.”

Donald Trump told an event in Washington “a really good man is going to be the prime minister of the UK now,” and Mr Johnson would “get it done”, referring to Brexit: The president added: “They call him Britain Trump. That’s a good thing.

The former London mayor and ex-foreign secretary spoke to staff at Conservative Party HQ after his victory was announced: He was then given a rousing reception by Tory MPs at a meeting in Parliament, where he urged them to “unite, unite, unite and win”. The BBC’s Nick Eardley, who was outside the room, said such gatherings had been gloomy and downbeat for many months, but this one was full of laughter…..One MP told our correspondent: “The BoJo show is up and running.” Another said: “The cloud has been lifted.”

Mr Johnson will begin announcing his new cabinet on Wednesday, but it has already been confirmed that Mark Spencer, MP for Sherwood in Nottinghamshire, will become chief whip – the person responsible for enforcing party discipline in the Commons.

A number of senior figures have already said they will not serve under Mr Johnson, though, citing their opposition to his stance on Brexit: He has pledged the UK will leave the EU on 31 October “do or die”, accepting that a no-deal exit will happen if a new agreement cannot be reached by then.

Education Minister Anne Milton tweeted her resignation just half an hour before the leadership result was due to be revealed, insisting the UK “must leave the EU in a responsible manner”: And International Development Secretary Rory Stewart confirmed he would be returning to the backbenches, where he would be spending more time “serving Cumbria” and “walking”.

David Gauke, another vocal opponent of a no-deal Brexit, announced he was resigning as justice secretary: They join the likes of Chancellor Philip Hammond, Foreign Office minister Sir Alan Duncan and Culture Minister Margot James who have all said they disagree too strongly with Mr Johnson’s Brexit strategy to work closely with him.

The EU Commission’s Brexit negotiator, Michel Barnier, said he was looking forward to working with Mr Johnson “to facilitate the ratification of the withdrawal agreement and achieve an orderly Brexit” The new Tory leader has previously said the agreement Mrs May reached with the EU was “dead”, having been rejected three times by MPs: Guy Verhofstadt, the European Parliament’s chief Brexit co-ordinator, said the parliament would hold an extraordinary meeting on Wednesday in response to Mr Johnson’s election.

Jeremy Corbyn reacted to the result by tweeting that Mr Johnson had “won the support of fewer than 100,000 unrepresentative Conservative Party members” “The people of our country should decide who becomes the prime minister in a general election,” he added. Speaking to the BBC later, Mr Corbyn said Labour planned to table a motion of no confidence in Mr Johnson. Asked when that would be, he replied: “It will be an interesting surprise for you all.”

Wednesday 12:00 BST onwards: Theresa May takes part in her last Prime Minister’s Questions. After lunch she will make a short farewell speech outside No. 10 before travelling to see the Queen to tender her resignation.

Boris Johnson will then arrive for an audience at Buckingham Palace where he will be invited to form a government.

After that he will make a speech in Downing Street before entering the building for the first time as prime minister.

Later, he will begin announcing his most senior cabinet appointments, such as chancellor, home secretary and foreign secretary, and will make and take his first calls from other world leaders.

Thursday: Mr Johnson is expected to make a statement to Parliament about his Brexit strategy and take questions from MPs. Parliament will break up for its summer recess later.

The new PM will also continue announcing his new cabinet. 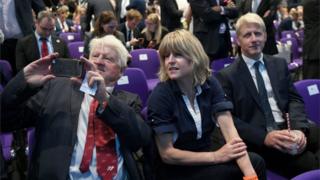 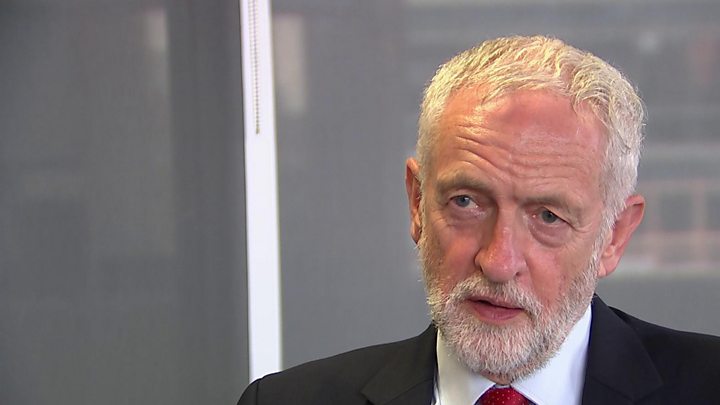 Newly-elected Lib Dem leader Jo Swinson said Mr Johnson had “shown time and time again that he isn’t fit to be the prime minister of our country”.

First Minister of Scotland Nicola Sturgeon congratulated Mr Johnson, but said she had “profound concerns” about him becoming prime minister.

The new leader also received congratulations from Arlene Foster, the leader of Northern Ireland’s Democratic Unionist Party, whose support has kept the Conservatives in government since the 2017 general election.

She said the pact – known as a confidence and supply agreement – continued and would be reviewed over the coming weeks “to explore the policy priorities of both parties”.

Leader of the Scottish Conservatives Ruth Davidson, who backed Mr Hunt in the campaign, also sent her congratulations, adding that the new PM had “an enormous task ahead of him”.