#AceNewsReport – Aug.03: Emergency services and the Royal Air Force will continue their efforts to bolster a damaged dam as forecasters warn downpours and lightning could be on the way: Water levels at the Toddbrook Reservoir in Whaley Bridge have been reduced by half a metre since Thursday but the damage to the 180-year-old structure remains at a ‘critical level’ An RAF Chinook and around 150 firefighters using high-volume pumps appear to have partly stabilised the reservoir’s spillway, with further pumps brought in by officials on Friday: The Met Office has issued a yellow weather warning for much of northern England and the Midlands on Sunday, which includes the area around the reservoir: It warns there could be damage and disruption from floodwater and lightning strikes: Officers spent hours going door-to-door around homes in the village, as residents fled the area in case the 1.3million tonnes of water contained in the huge Georgian-era Toddbrook Reservoir starts to escape: Families were turning up in tears at the evacuation point of a school three miles away in Chapel-en-le-Frith as they were put up in hotels in the Buxton area and police also told them of a 50/50 chance the dam would be breached: Panicked residents took to social media to say they were concerned about criminals targeting their unoccupied homes MailOnline reported. 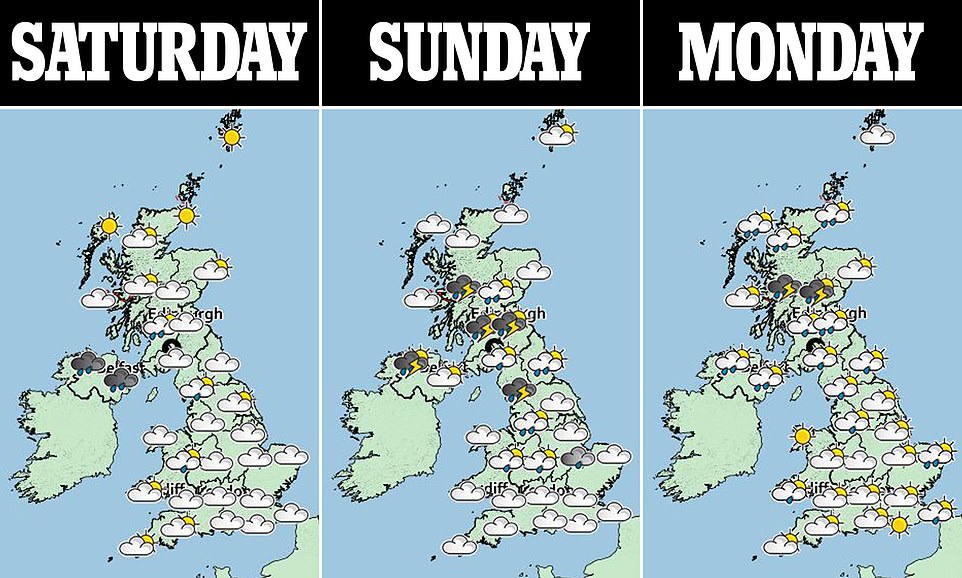 But Derbyshire Constabulary told MailOnline a police cordon was in place and roadblocks had been set up around the town: The Environment Agency issued a severe ‘danger to life’ flood warning after 82.8mm (3in) of rain fell on the hills above Whaley Bridge in 48 hours up to Thursday afternoon, the equivalent of a month’s worth of rain: Environment Secretary Theresa Villiers chaired a Cobra emergency response committee meeting to discuss the situation. 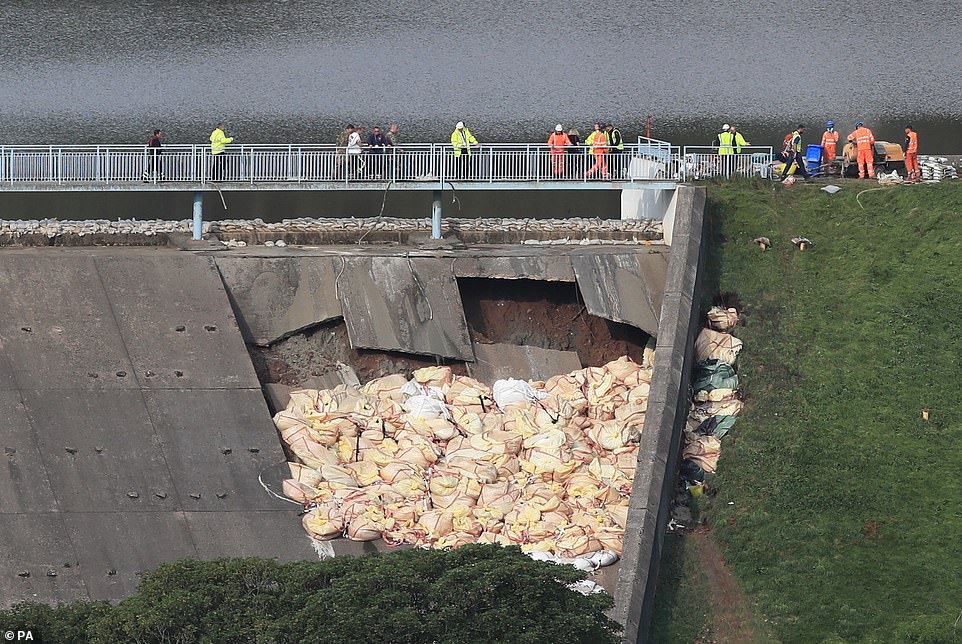 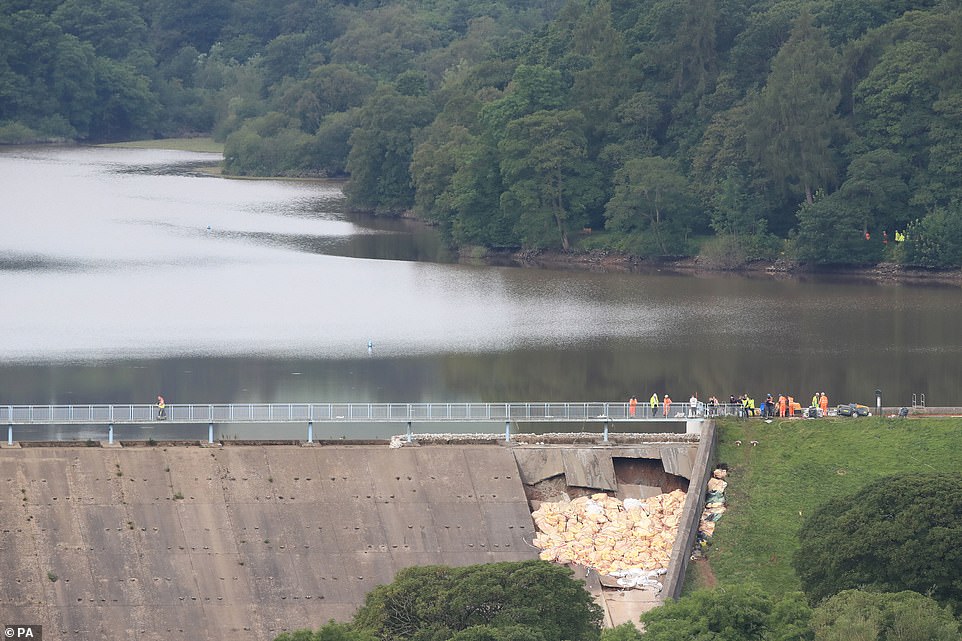 The Met Office has issued a yellow weather warning for much of northern England and the Midlands on Sunday, which includes the area around the reservoir (pictured on Saturday morning): Evacuated residents spent another night away from their homes on Friday and police warned it could be several days before they are allowed to return: Environment minister Therese Coffey warned the Whaley Bridge dam situation is still ‘critical’ as she urged residents not to return home while there is still a threat to life.

She told BBC Radio 4’s Today programme on Saturday morning : ‘I think we are still in that critical stage, that’s why we still have the severe flood warning: ‘They are at risk if they are in that main town and I’m glad that people have responded. 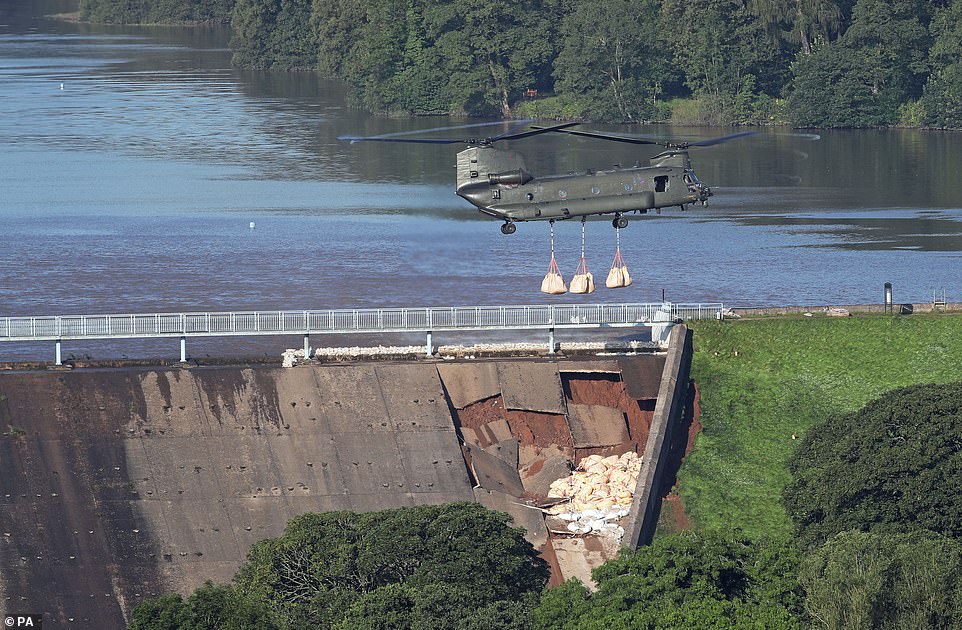 An RAF Chinook helicopter flies in sandbags to help repair the dam at Toddbrook Reservoir near Whaley Bridge on Friday morning: I cannot emphasise enough how patient they need to be: ‘ Of course this is a distressing and worrying time for them, but if that dam were to breach it would lead to a loss of life if there people there. There’s no doubt about that.’………Prime Minister Boris Johnson promised on Friday the damaged reservoir would have a ‘major rebuild’ as he met locals at nearby Chapel-en-le-Frith High School, which is being used as an evacuation centre. 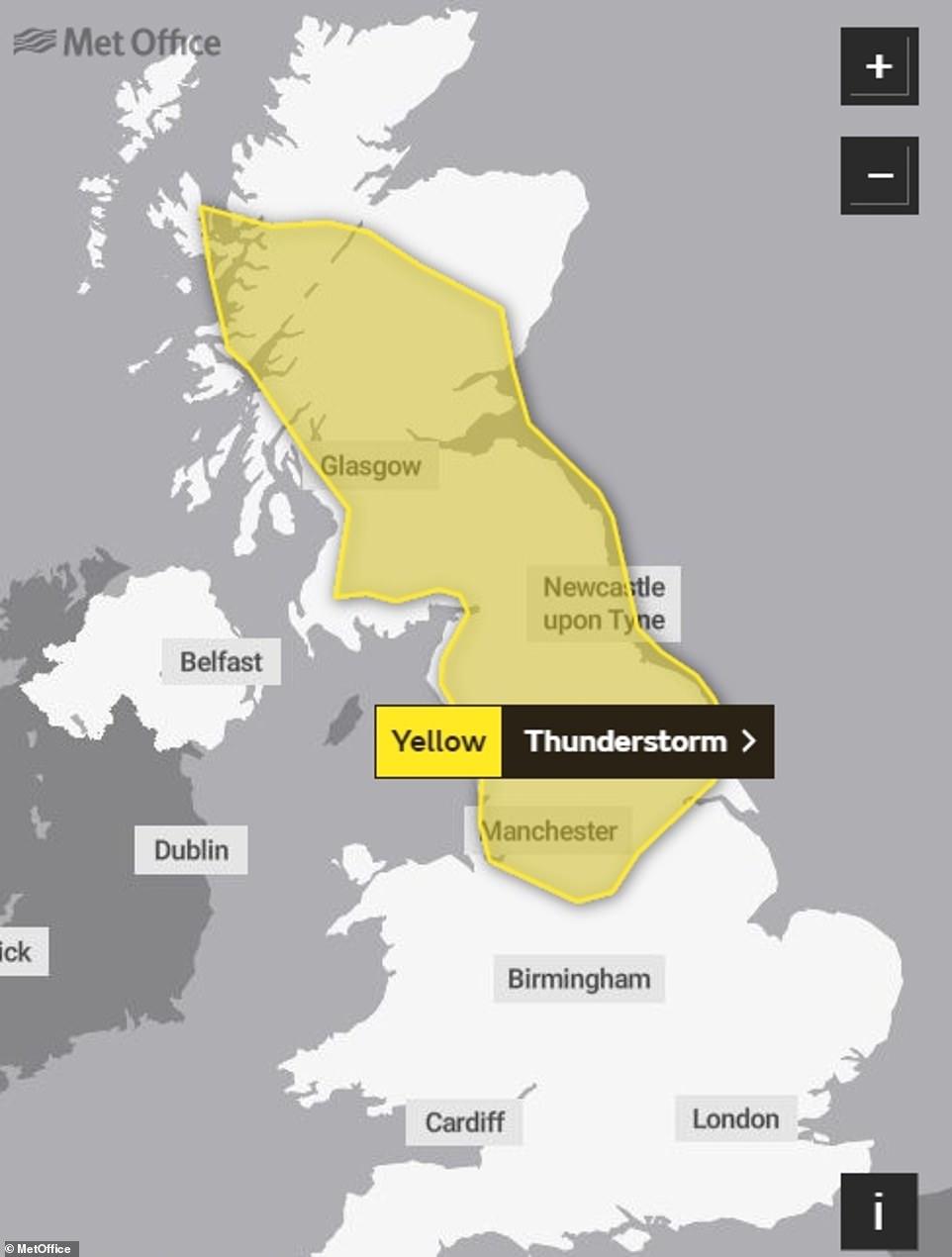 The Met Office warned there could be damage and disruption from floodwater and lightning strikes on Sunday (pictured, the yellow weather warning) Describing the damage to the dam as ‘pretty scary’, he said: ‘The plan is to try and stop the dam breaking, clearly. And so a huge amount of effort is going into that: Mr Johnson, who arrived by helicopter, said he thought they had to get the level of the water down about 8m, although there was some discussion with the surrounding officials about whether this was the exact figure: He added: ‘I was talking to one of the villagers from Whaley Bridge who said that he remembered something like this happening 50 years ago. 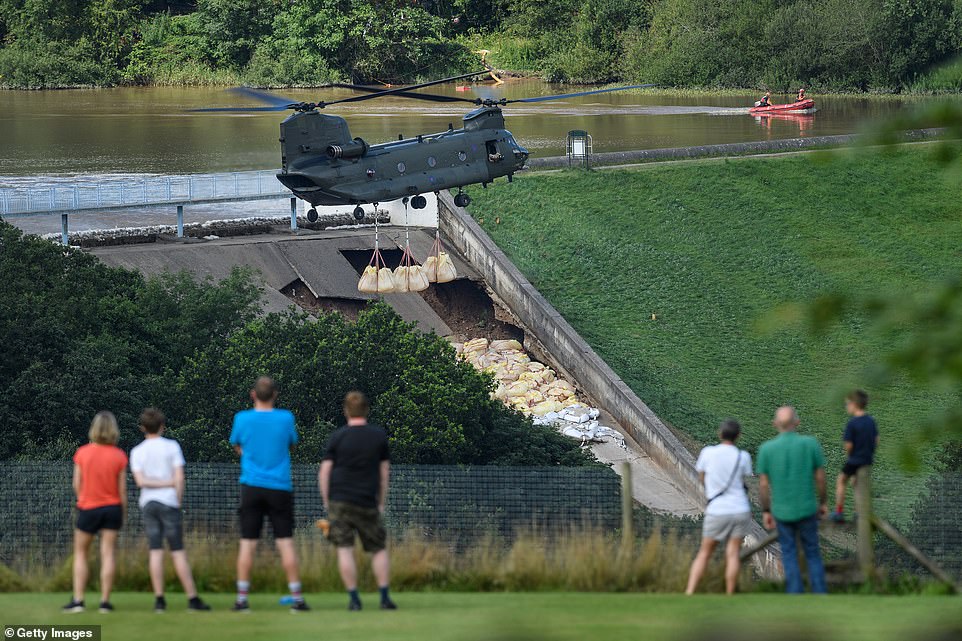 Residents watch from a nearby field as the aircraft dispatches its next load on to the dam’s broken wall on Friday: Emergency services check on the delivery from a boat nearby: “ We’ve had an exceptional weather event, we must make sure that this dam can cope with it in the future: ‘ That will mean a major rebuild, clearly.’…….Those evacuated from their homes were allowed to return briefly on Friday evening to pick up any vital items or pets: The operation allowed just one person from each household to return for a maximum of 15 minutes, with the same system expected to be in place for Saturday afternoon: Derbyshire Police said any residents who re-entered Whaley Bridge would be doing so at their own risk and that the threat to life remained high. 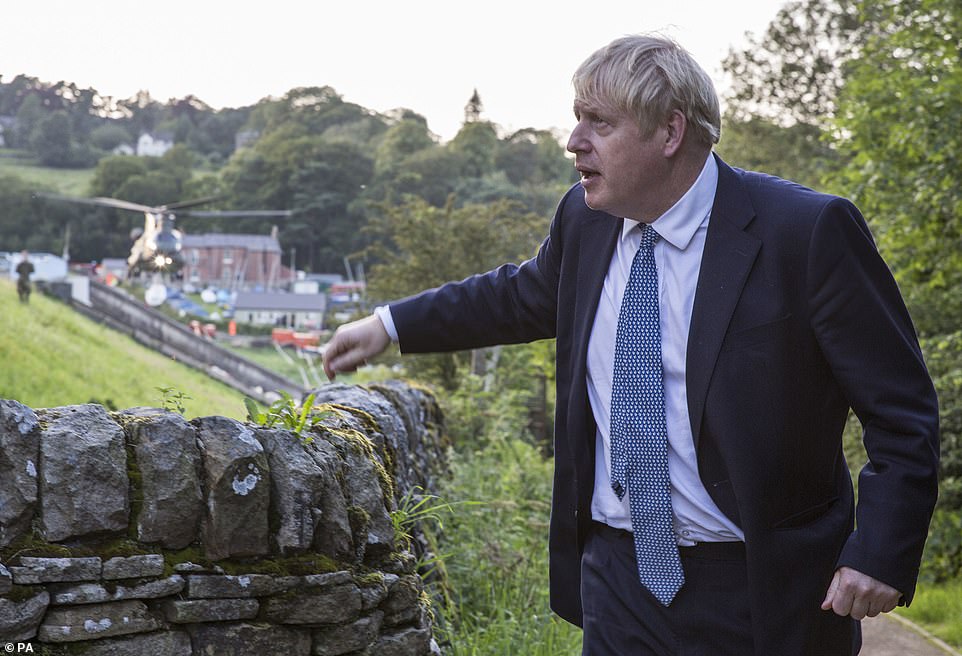 Prime Minister Boris Johnson (pictured on Friday afternoon) promised the damaged reservoir would have a ‘major rebuild’ as he met locals at nearby Chapel-en-le-Frith High School, which is being used as an evacuation centre: Around 1,000 people were evacuated from the town but most found their own accommodation with family and friends, according to Derbyshire County Council: Police have closed railway lines in the Whaley Bridge area over the risk of potential flooding which is due to continue into the weekend:

The reservoir is on the north-west edge of the Peak District National Park and was built in 1831, according to experts, although the Environment Agency records it as being built in 1840-41: According to a 2011 Environment Agency report on national dam incidents, Toddbrook ‘has a history of leakage’ Engineers and emergency workers are scrambling to save the Toddbrook Reservoir in Derbyshire to prevent millions of tonnes of water from pouring through and laying waste to an entire town.