#AceNewsReport – Aug.04: EU leaders must give their chief negotiator the mandate to revise the UK’s withdrawal agreement, otherwise a no-deal Brexit is “coming down the tracks”, the Brexit secretary has said: Writing in the Mail on Sunday, Stephen Barclay said “political realities” had changed after May’s European elections: New MEPs were elected in 61% of seats, he said, marking a “fundamental shift”………………He called on EU leaders to allow Michel Barnier to negotiate in a way that finds “common ground” with the UK: Brussels has consistently insisted that the withdrawal agreement – one of two main elements of Theresa May’s Brexit deal, which was resoundingly rejected by MPs – cannot be renegotiated.

Mr Barclay said Mr Barnier had told him in their discussion last week that he is bound by the instructions given to him by the European Commission and leaders of member states: But the change in the EU Parliament means there is a need for the EU to alter its approach, Mr Barclay said: “Mr Barnier needs to urge EU leaders to consider this if they too want an agreement, to enable him to negotiate in a way that finds common ground with the UK. Otherwise, no deal is coming down the tracks,” he said: By contrast, Boris Johnson’s appointment as prime minister strengthened the UK’s mandate to leave on 31 October, he said. 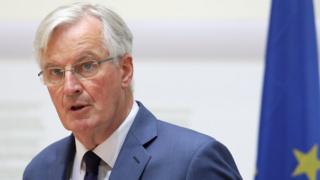 ReutersMichel Barnier has said demands to eliminate the backstop are “unacceptable” …………Prime Minister Boris Johnson has ramped up his rhetoric over his desire to take the UK out of the EU by 31 October, as part of his “do or die” commitment: He has clashed with EU leaders over his demands to remove the Irish backstop – which prevents a hard border if the UK and EU fail to agree a long-term trade deal – from the withdrawal agreement.

Irish Taoiseach Leo Varadkar told Mr Johnson this week “the backstop was necessary as a consequence of decisions taken in the UK” ……………..But Mr Barclay said the backstop could mean people in Northern Ireland having EU rules “foisted on them” indefinitely to preserve the open border: He rejected the UK staying in the customs union and the single market as a solution, saying the border issue should be resolved in future talks on the long-term trading agreement with the EU: “There is simply no chance of any deal being passed that includes the anti-democratic backstop. This is the reality that the EU has to face,” he said.

Speaking last month, Mr Barnier said demands to eliminate the backstop were “unacceptable” and Mr Johnson’s approach to Brexit was “rather combative”.