#AceNewsReport – Aug.05: Twenty people were killed and 47 injured when a car packed with explosives intended for a militant attack blew up outside Cairo’s main cancer hospital on Monday, the interior ministry said: Earlier it was reported that at least 19 people have been killed in an explosion after several cars collided in the Egyptian capital, Cairo: Thirty others were injured in the incident, which happened outside a hospital in the centre of the city late on Sunday: There was no official statement indicating it was an attack: The explosion happened when a car which had been travelling against the traffic hit three others, officials said: It sparked a fire that forced the evacuation of nearby buildings: Images of blazing cars and plumes of smoke have been widely shared on social media.

Seventeen people have died and 32 have been injured in an explosion outside Egypt’s National Cancer Institute in central Cairo, Egypt’s health ministry said early on Monday, Reuters reports.

A car driving against traffic on Cairo’s corniche collided with three other cars, causing the explosion, Egypt’s interior ministry said in a statement.

Egypt’s public prosecutor is investigating the cause of the incident, sources told Reuters, but there was no official statement indicating that the explosion was an attack. 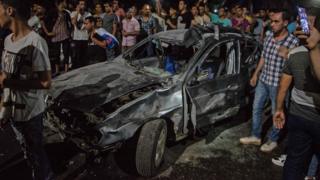 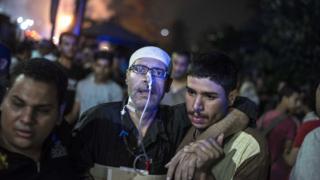 EPAPeople help an injured man near to the site of the blast: Dozens of patients from the nearby National Cancer Institute were evacuated to other hospitals, the health ministry said: It added that several people caught up in the blast were in a critical condition: The explosion caused damage to the structure of the hospital, one witness told Reuters news agency: Images showed investigators scouring the scene overnight while armed police stood guard.

The country’s public prosecutor has opened an investigation.