#AceNewsReport – Aug.27: The huge mass of stone, near to Tonga, has been floating through the Pacific for the last two weeks, and follows reports of plumes of smoke from the direction of a named submarine volcano: But NASA reports that volcanologists at the Smithsonian in the US believe the pumice raft could be from an unnamed volcano, which hasn’t had a reported explosion since 2001 Sky News reported.

The NASA Earth Observatory wrote: “On August 13, 2019, the Operational Land Imager on Landsat 8 acquired natural-color imagery of a vast pumice raft floating in the tropical Pacific Ocean near Late Island in the Kingdom of Tonga: “NASA’s Terra satellite detected the mass of floating rock on August 9; the discolored water around the pumice suggests that the submarine volcano lies somewhere below: “By August 13, the raft had drifted southwest. As of August 22, the raft had moved north again and was a bit more dispersed, but still visible.” 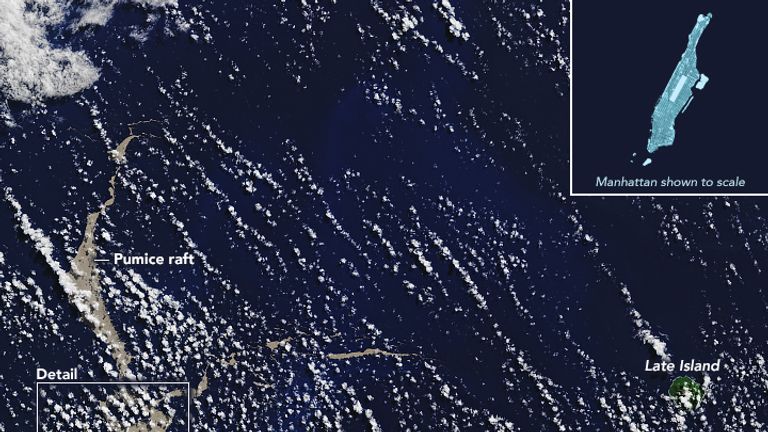 Shannon Lenz, who sailed through the field of various size rocks making up the pumice island, wrote: “We sailed through a pumice field for six to eight hours, much of the time there was no visible water……………..”It was like ploughing through a field. We figured the pumice was at least 6 inches thick.”

Michael Hoult and Larissa Brill, who were sailing to Fiji in a catamaran, passed the raft, and logged a detailed explanation of what they saw on Facebook: They said: “We had heard the previous day on email of “pumice fields” 50NM North of Vava’u. We saw none as we rounded North of Vava’u earlier in the day on our route ex Bora Bora………….”Sailing on 255T we started seeing some floating rocks of random sizes (marbles to tennis balls) from position 18 46′ S 174 55’W……………….”We reduced sail to slow our speed.”…….They reported a smell of sulphur, and started to see and strike larger rocks as they sailed through………..The pair reported seeing rocks the size of basketballs and have passed on a warning to other boats sailing in the same areas to travel as slowly as possible.

According to Scott Bryan of Queensland University, the travelling pumice stones may help the Australian Great Barrier Reef to recover. 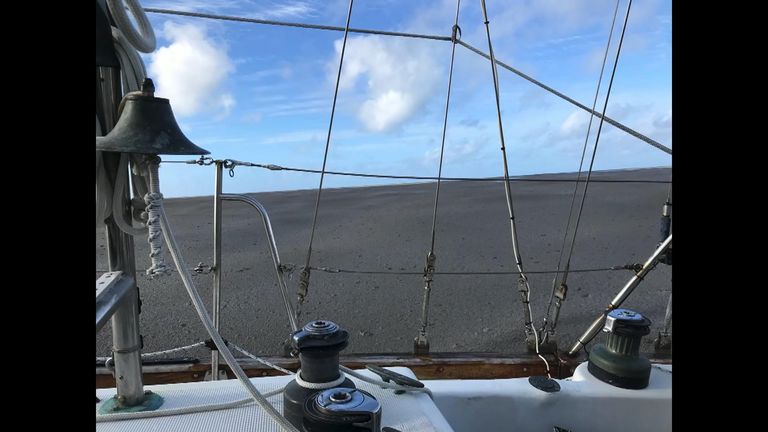 He told The Guardian: “Based on past pumice raft events we have studied over the last 20 years, it’s going to bring new healthy corals and other reef dwellers to the Great Barrier Reef: “Each piece of pumice is a rafting vehicle. It’s a home and a vehicle for marine organisms to attach and hitch a ride across the deep ocean to get to Australia.”………….Writing on Discover Magazine’s blog, Volcanologist Erik Klemetti of Denison University said: “Pumice rafts can drift for weeks to years, slowly dispersing into the ocean currents. These chunks of pumice end up making excellent, drifting homes for sea organisms, helping them spread……….”The erupted pumice means this volcano erupts magma high in silica like rhyolite.”………The raft is about 150 square km, and events similar to this happen about every five years.