#AceNewsReport – Aug.27: Madrid and the surrounding areas were hit by the intermittent storm throughout the day that caused flight delays, flooded tunnels and parking lots and interrupted subway services: Arganda del Rey, a suburb southeast of the capital, was hit hardest by the wild weather: The storm triggered torrents of water that were through the streets, taking along cars and garbage containers: Resident Larisa Andrei was at home with her family when she noticed the escalating rainfall, followed by significant hail and then captured dramatic footage of raging floods: Videos posted to Twitter by local residents showed cars being washed down flooded streets: Large hail could also be seen falling in several neighbourhoods. 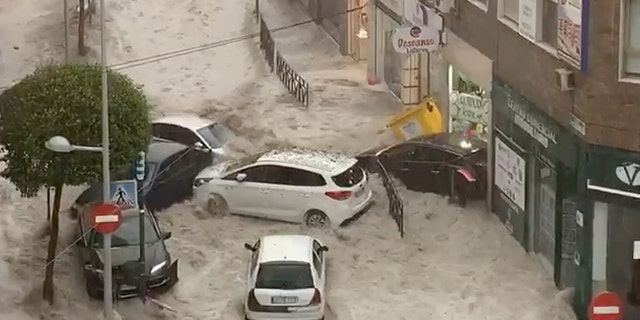 Spain’s meteorological agency says it registered more than 9,000 bolts of lightning in six hours: Several villages nearby were also affected, but there were no reports of injuries: Firefighters responded to more than 1,000 calls for service, most of which included fallen trees or flooding, El Pais reported.

Spain’s meteorological agency said that by Tuesday, the rains had moved to the east coast and the Mediterranean Balearic Islands, such as Mallorca.