#AceNewsReport – Aug.27: The National Hurricane Center said in its 8 a.m. ET update that Tropical Storm Dorian is located about 60 miles west-northwest of St. Lucia, moving west-northwest at 13 mph with maximum sustained at 50 mph: Hurricane watches have been posted for Puerto Rico and for the Dominican Republic from Isla Saona to Samaná, and tropical storm warnings have been issued for Martinique. The center said the storm is forecast to strengthen during the next 48 hours before passing near or south of the U.S. territory: The storm is forecast to track near or south of Puerto Rico on Wednesday and moving near or over the Dominican Republic by Wednesday night: After Thursday, Dorian’s path is still not fully clear. The Bahamas are likely to have tropical storm conditions by Friday into Saturday, with Dorian possibly reorganizing in that time frame, according to Fox News Senior Meteorologist Janice Dean……..

In Puerto Rico, Gov. Wanda Vázquez signed an executive order on Monday declaring a state of emergency and provided a list of all the new equipment that public agencies have bought since Hurricane Maria: “I want everyone to feel calm,” she said. “Agency directors have prepared for the last two years. The experience of Maria has been a great lesson for everyone.”

Public schools are scheduled to close by Tuesday afternoon and at least one cruise ship canceled its trip to Puerto Rico, according to the governor. Government officials said that 360 shelters will be made available for those who do not have a safe place available to ride out the storm: The governor said about 24,000 cots have been distributed across the island so far.

Some grocery stores ran out of bottled water on Monday as people rushed to buy supplies, including generators, and filled their cars with gas: Many are worried about power outages and heavy rains on an island still struggling to recover from Hurricane Maria, a Category 4 storm that hit in September 2017.

Some 30,000 homes on Puerto Rico still have blue tarps as roofs and the electrical grid remains fragile and prone to outages even during brief rain showers: Dorian knocked out power overnight in Barbados, where crews began clearing downed trees and repairing the electrical grid early Tuesday. Jackie Marshall-Clarke, a spokeswoman for Barbados Light & Power, said on state-owned TV that many communities in the island’s northern region were without electricity. 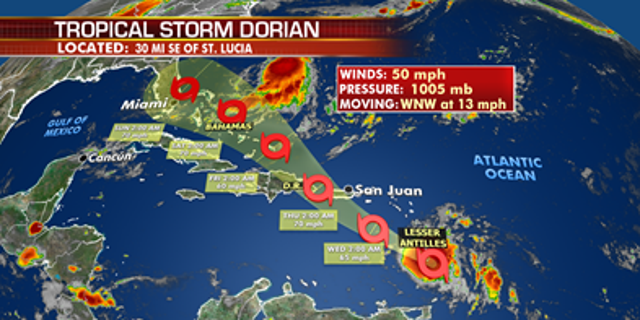 The NHC’s forecast cone shows Dorian possibly impacting Florida by early Sunday morning: “Once it gets into the Bahamas, that’s where I’m concerned because the water is very warm and you can see (it) moving towards Florida,” Dean said on “Fox & Friends.” “Will it be a tropical storm, will it be a depression, will it be a hurricane?” 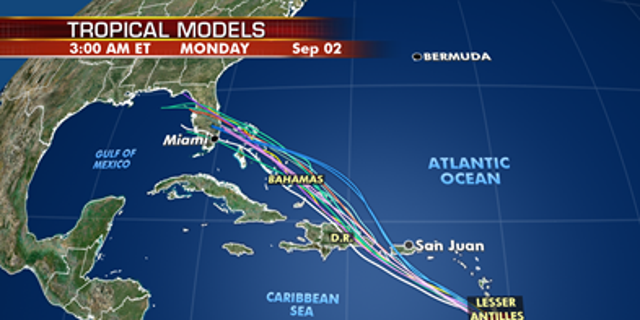 What tropical models are saying about the potential path for Tropical Storm Dorian. (Fox News)

The NHC said “while uncertainty remains high,” wind and rain impacts are possible in the Bahamas and Florida later this week and into the weekend: “Residents in these areas should monitor the progress of Dorian and ensure that they have their hurricane plan in place,” the NHC said.

#AceNewsDesk reports …………..The Associated Press contributed to this report: Published: Aug.27: 2019: TROPICAL STORM DORIAN’S PATH: WHAT YOU NEED TO KNOW