#AceNewsReport – Sept.04: All 21 lawmakers from the ruling Conservative Party who voted against the government to back a motion to seize control of parliamentary time to try to block a ‘no deal’ Brexit are being kicked out of the party, the BBC’s political editor said on Tuesday, citing government sources:The group includes former finance minister Philip Hammond and Nicholas Soames, the grandson of former prime minister Winston Churchill: https://t.co/kgyVNjqTPZ

21 Conservative MPs have had the whip removed as the Prime Minister insists he will not ask for a delay – but would call an election via MEN – News https://ift.tt/2zPXt3L

How can the government suspend parliament? The parliamentarians were supported in their legal challenge by Jolyon Maugham of the Good Law Project, who said the ruling would immediately be appealed to the Inner House of the Court of Session and then to the Supreme Court in London: He said: “The idea that if the prime minister suspends Parliament the courts can’t get involved looses some ugly demons: “If he can do it for 34 days why not 34 weeks or 34 months? Where does the political power end? It is not the law as I understand it.”………………..It emerged during Tuesday’s hearing that Mr Johnson appears to have approved a plan to shut down the UK Parliament two weeks before publicly announcing it………..The Court of Session heard that the prime minister was sent a note on 15 August asking if he wanted to prorogue parliament from mid-September. A tick and the word “yes” was written on the document………………….Responding to Lord Doherty’s ruling, a UK government spokesman said: “As we have set out, the government needs to bring forward a strong domestic legislative agenda – proroguing Parliament is the legal and necessary way of delivering this: “We welcome the court’s decision and hope that those seeking to use the judiciary to frustrate the government take note and withdraw their cases.”

A Scottish judge has rejected a bid to have Boris Johnson’s plan to shut down parliament ahead of Brexit declared illegal: The case was brought to the Court of Session in Edinburgh by a cross-party group of 75 parliamentarians, who argued the PM had exceeded his powers: But Lord Doherty ruled on Wednesday that the issue was for politicians and voters to judge, and not the courts: He said there had been no contravention of the law by the UK government: The group of MPs and peers behind the legal challenge, who are headed by SNP MP Joanna Cherry and Liberal Democrat leader Jo Swinson, want to appeal against the ruling: The legal team returned to the court on Wednesday afternoon to ask judges at the Inner House to hear the appeal, potentially on Thursday: The prime minister announced on 28 August he wanted to shut down Parliament, a process known as proroguing, for five weeks ahead of a Queen’s Speech on 14 October: His political opponents argue Mr Johnson’s aim is to avoid parliamentary scrutiny and to stop them passing legislation that would prevent the UK leaving the European Union without a deal on 31 October: The UK government insists this is not the case, and says proroguing Parliament will allow Mr Johnson to set out his legislative plans in the Queen’s Speech while still allowing sufficient time for MPs to debate Brexit: In his ruling, Lord Doherty said the decision to prorogue parliament was justiciable – a matter for the courts – in some circumstances but not in others, depending on the context: But he said he had not been persuaded after hearing legal arguments from both sides on Tuesday that the case before him was justiciable: Read Lord Doherty’s full opinion 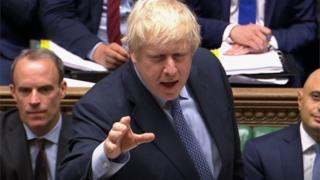 PA MediaMr Johnson faced MPs at Prime Minister’s Questions on Wednesday: He added: “In my view, the advice given in relation to the prorogation decision is a matter involving high policy and political judgement: “This is political territory and decision making which cannot be measured against legal standards, but only by political judgements: “Accountability for the advice is to parliament, and ultimately the electorate – not to the courts.”….Lord Doherty also said it was opinion that there had been “no contravention of the rule of law” by the prime minister: He said: “The power to prorogue is a prerogative power and the prime minister had the vires (powers) to advise the sovereign as to its exercise.”

What other legal challenges is the government facing? 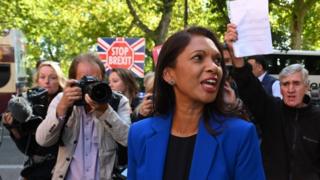 Getty ImagesAnti-Brexit campaigner Gina Miller is challenging the suspension of Parliament in the English courts: On Thursday, the High Court in England will consider a judicial review request from Gina Miller, the businesswoman who successfully challenged the government over the triggering of the Article 50 process to start the Brexit countdown: Ms Miller, who has been joined by former Prime Minister John Major, wants to challenge Mr Johnson’s suspension of parliament: And in Belfast, a judicial review against the government by a campaigner arguing that no deal could jeopardise the Northern Ireland peace process is scheduled for 16 September.