#AceNewsReport – Sept.04: Mr Johnson needs the support of two-thirds of MPs to trigger an election: But shadow Brexit secretary Sir Keir Starmer told Labour MPs the leadership would not back an election until a delay had been agreed with the EU: Meanwhile, No 10’s decision to expel 21 Tory MPs for defying the party whip on Tuesday continues to causes recriminations in the party: One of those booted out of the party, Margot James, has publicly questioned the role played by Dominic Cummings, the PM’s senior aide, in the decision: Raising the issue at PMQs, she urged Mr Johnson to bear in mind his predecessor Margaret Thatcher’s famous adage that “advisers advise and ministers decide”

The showdown between the government and opponents of a no-deal Brexit will continue later as Labour and other opposition parties seek to pass a bill requesting a further delay if there is no deal by 19 October: A total of 21 Tories defied the PM on Tuesday to vote with the opposition to enable the bill to be considered, as Mr Johnson suffered his first Commons defeat as prime minister by a margin of 328 votes to 301.

If the Brexit delay bill passes later on and moves to the Lords, as is expected, Mr Johnson will push for an immediate vote on an early general election: Speaking at Prime Minister’s Questions, Mr Johnson said it was “absolutely clear” that the UK would get a new deal from Brussels, with the controversial Irish backstop removed: He suggested that Mr Corbyn was afraid of the judgement of the people, joking that “there is only one chlorinated chicken I can see this House and he is on that bench”………But the Labour leader said the PM was “running down the clock” on a no-deal Brexit and “hiding the facts” about the likelihood of food and medicine shortages…………….”I don’t see how I can be accused of undermining the negotiations because there are no negotiations taking place,” he told MPs. 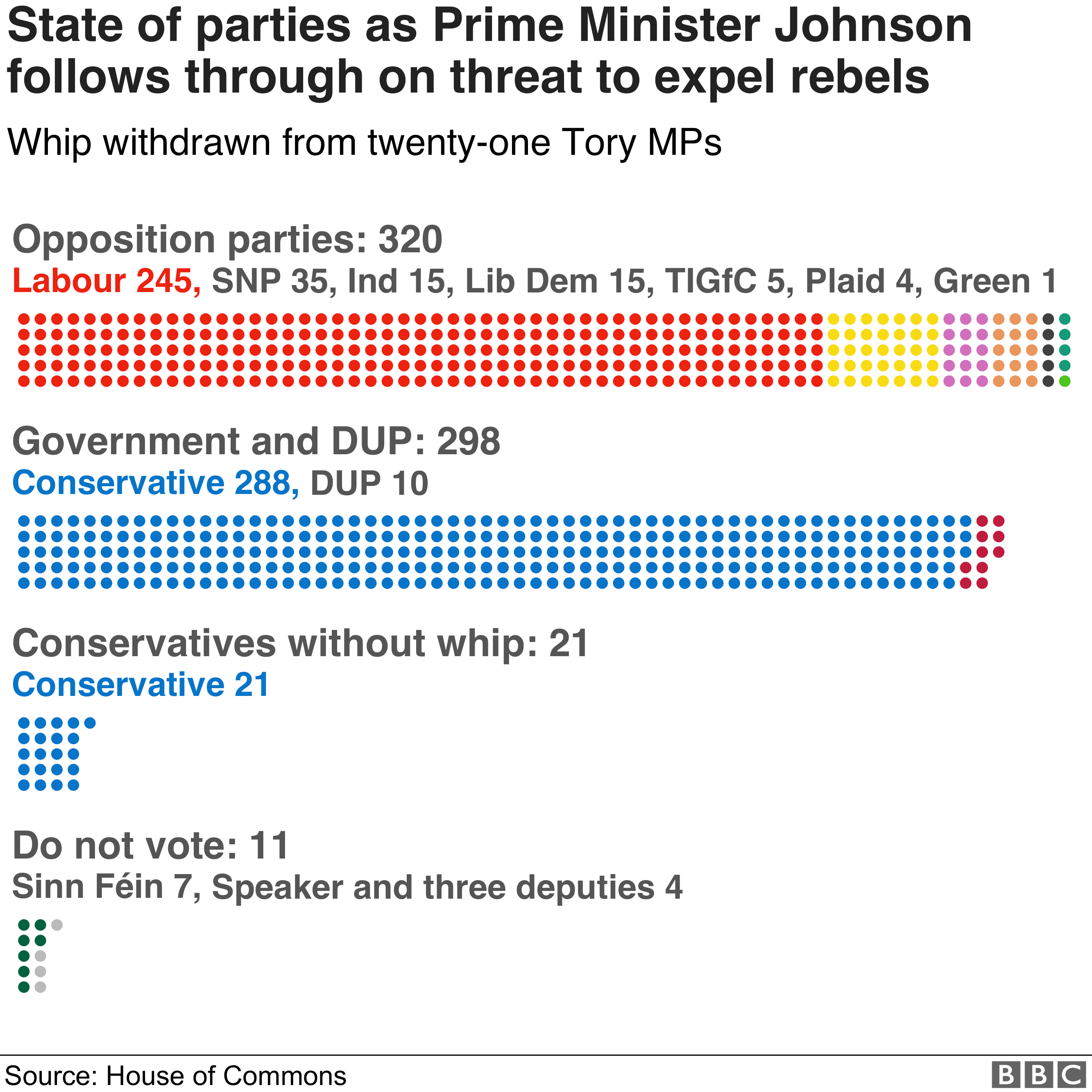 Shadow Brexit secretary Sir Keir Starmer told BBC Radio 4’s Today that Labour wanted a general election but “on its terms not Boris Johnson’s terms” He said the party did not “trust” the PM to hold the election before the Brexit deadline, as No 10 had “lied” last month when it denied reports that it planned to suspend Parliament: “We are not shy of a general election but we are not going to be trapped into abandoning control of Parliament or be taken in what Boris Johnson says because we don’t trust him.”……But, at a meeting in London, a succession of Labour MPs called on the leadership to hold off backing an election until after Brexit had been delayed.

The BBC’s Chris Mason said one MP reportedly told colleagues: “Johnson said it is Brexit do or die on October 31st. I want him to die.”……….Under the Fixed Term Parliaments Act, a prime minister must have the backing of at least two-thirds of the UK’s 650 MPs before a poll can be called outside of the fixed five-year terms…………The Lib Dems say they will vote against an early election at this stage. 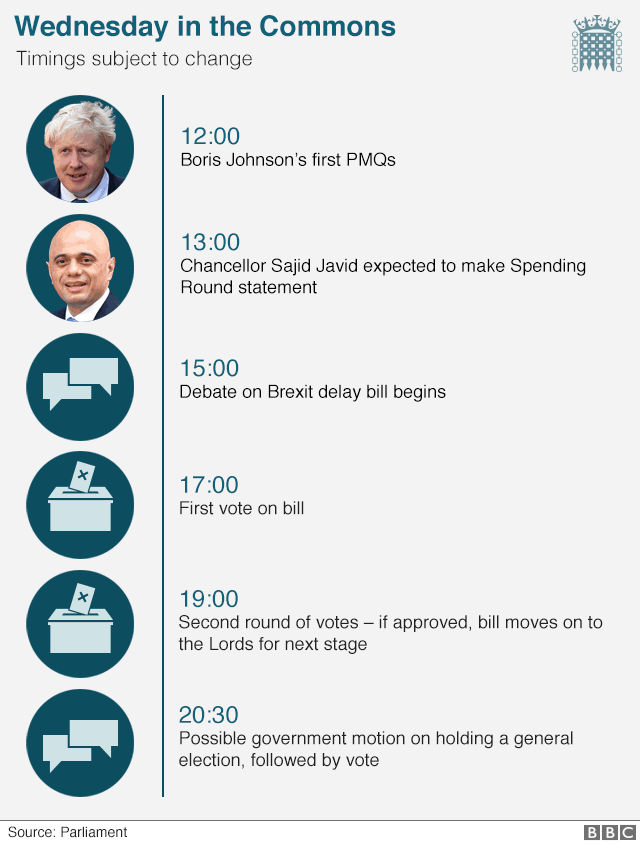 Downing Street said the 21 Tory MPs who rebelled in Tuesday’s vote would have the whip removed, effectively expelling them from the parliamentary party and meaning they could not stand as Conservative candidates in the election: Among the jettisoned rebels are former justice secretary David Gauke, Winston Churchill’s grandson Sir Nicholas Soames, and Rory Stewart, who recently stood against Boris Johnson to be the party leader.

The former international development secretary told the Today programme he was sacked by text message, as he was being given the GQ magazine award for politician of the year: “It was a pretty astonishing moment,” he said. “It feels a little bit like something you associate with other countries – one opposes the leader, one loses the leadership race, no longer in the cabinet and now apparently thrown out of the party and one’s seat too.”……Mr Stewart said the decision to stop him standing as a candidate was “un-Conservative” and the final decision should rest with local associations and not be made centrally.

Another of the rebels, Richard Benyon, said he would continue to sit on the Tory benches and support the PM’s domestic agenda, saying he hoped to return to the fold “one day”….But there have been calls from loyal MPs for No 10 to rethink its conduct amid anger over the treatment of rebels and the suspension of Parliament.

Sir Roger Gale said Dominic Cummings, one of Mr Johnson’s closest advisers, had “abused and swore” at Tory rebels and should be disciplined: “The fact that you have at the heart of No 10 as the PM’s senior advisor an unelected, foul-mouthed oaf throwing his weight around is completely unacceptable,” he told the BBC…….”If the PM doesn’t have Dominic Cummings frogmarched out of Downing Street himself then the chances are it not be the Tory rebels or Jeremy Corbyn but Mr Cummings who will bring down this administration.”

Ruth Davidson, the outgoing leader of the Scottish Conservatives, criticised the decision to throw out dissident MPs, tweeting:

Hours before the vote on Tuesday, the government had already lost its working majority when Tory MP Phillip Lee defected to the Liberal Democrats. 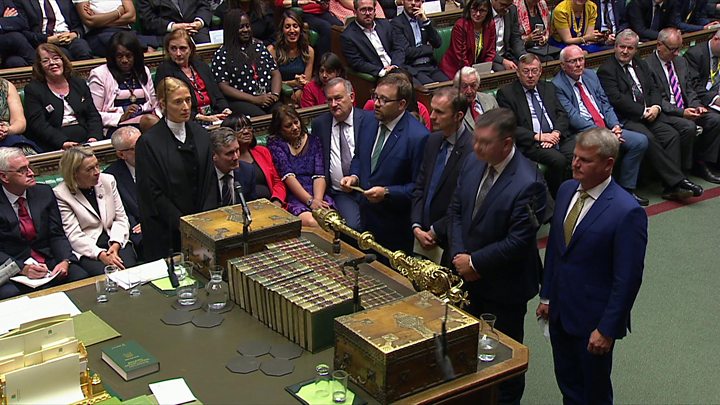 The moment MPs voted to take control of the Commons