#AceNewsReport – Sept.19: Three teenagers have been charged with the murder of a police officer who was killed while investigating a burglary: The Crown Prosecution Service said it had authorised Thames Valley Police to charge Henry Long, 18, and two 17-year-old boys with murder and conspiracy to steal a quad bike…………After PC Andrew Harper, 28, died after he was dragged along a road by a vehicle in Sulhamstead, Berkshire, on 15 August: Thomas King, 21, has been charged with conspiracy to steal a quad bike. 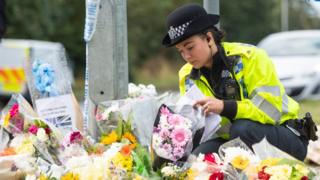 PA Media: PC Harper was killed on the A4 Bath Road:

Thames Valley Police said on Tuesday the latest arrests followed “new evidence coming to light” …………Jed Foster, 20, who is also charged with the murder of the PC and the theft of a quad bike, has previously appeared in court:

How the CPS decides whether or not to charge:

Any decision by the CPS does not imply any finding concerning guilt or criminal conduct; the CPS makes decisions only according to the test set out in the Code for Crown Prosecutors and it is applied in all decisions on whether or not to prosecute.

It is not the function of the CPS to decide whether a person is guilty of a criminal offence, but to make fair, independent and objective assessments about whether it is appropriate to present charges for the criminal court to consider.

The CPS assessment of any case is not in any sense a finding of, or implication of, any guilt or criminal conduct. It is not a finding of fact, which can only be made by a court, but rather an assessment of what it might be possible to prove to a court, in accordance with the Code for Crown Prosecutors.

CPS prosecutors must also keep every case under review, so that they take account of any change in circumstances that occurs as the case develops, including what becomes known of the defence case. If appropriate, the CPS may change the charges or stop a case.

Mr Foster, of Pingewood, Burghfield, did not enter a plea and was remanded in custody when he appeared via video link at Reading Crown Court: He was told a provisional trial date of 20 January had been fixed.

PC Harper, who got married four weeks before his death, was killed on the A4 Bath Road: His wife Lissie paid tribute to her husband as the “kindest, loveliest, most selfless person you will ever meet”………………… The roads policing officer, who became a regular officer in 2011 after joining as a special constable a year earlier, had attended a reported break-in with a fellow officer in Sulhamstead at about 23:30 BST on 15 August: A post-mortem examination concluded he died of multiple injuries.