#AceNewsReport – Sept.25: Perez, 41, has a green card as a permanent resident but was deported after serving time for a 2008 non-violent drug conviction: Last month, Illinois Gov. J.B. Pritzker issued a pardon, which erased the conviction: Perez’s attorney, Chris Bergin, told reporters that he is hoping for a speedy decision after the hearing so that Perez won’t have to return to Mexico when the two weeks are up. 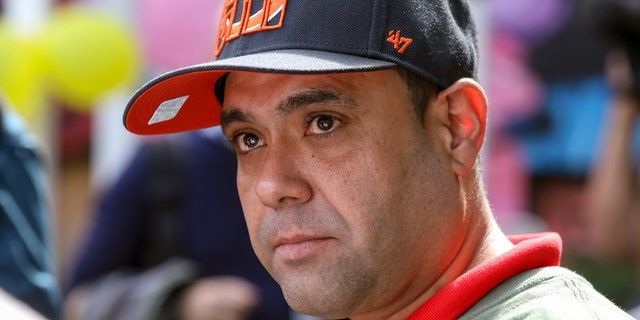 Miguel Perez Jr. listens to a supporter speaking at a news conference in Chicago on Tuesday. (AP Photo/Teresa Crawford)

“I’m speechless. I wish I could say a lot more but it’s just, I’m choked up,” a teary-eyed Perez said outside a church, hours after landing in Chicago. “I’m so blessed to be here.”…………………Perez was born in Mexico, but his family immigrated when he was a young child: His parents are naturalised U.S. citizens and his two children were born in the U.S……………He joined the Army in 2002 and served in Afghanistan where he suffered a brain injury and was diagnosed with post-traumatic stress disorder.

It was the disorder, which caused crippling anxiety, that led him to the drug charge after he was unable to receive medical care at a Veterans Administration hospital, according to Bergin: In 2008, he was accused of giving cocaine to an undercover police officer……………………..He pleaded guilty and spent seven years in prison and was then turned over to Immigration and Customs Enforcement, who detained him for two years.