﻿#AceNewsReport – Sept.28: The brother of Pakistani social media star Qandeel Baloch has been jailed for life, three years after her murder: Waseem confessed to strangling Ms Baloch, 26, in July 2016. At the time, he said it was because the star had brought shame on the family………….He was reported to be upset by pictures she had uploaded to social media…………On Friday, a court acquitted six other men charged in connection with the killing, including religious scholar, Mufti Abdul Qavi…………Ms Baloch’s family had initially pointed the finger at the mufti, saying he had instigated the murder after he was criticised for taking selfies with the social media star a month before her death……….He has always denied any involvement. 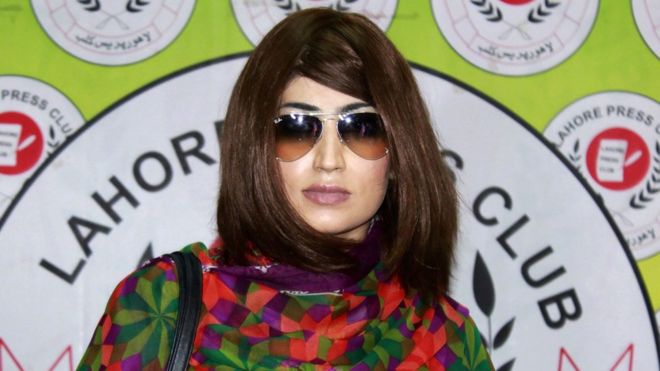 Qandeel Baloch was killed in 2016

Her brother Waseem is able to appeal against the sentence: His lawyer, Sardar Mehmood, told news agency AFP that he hoped Waseem Baloch would be “acquitted by a high court”………………..Another brother, Arif, has been declared a fugitive in relation to Ms Baloch’s death, the court said.

At the court in Multan, there were scenes of celebration over the acquittals – and tears over the conviction: Photos shared on social media show Mufti Qavi being showered in rose petals as he left court, his supporters overjoyed with the verdict……….Meanwhile, Ms Baloch’s mother wept tears for her son……….”He is innocent,” Anwar Mai told reporters before the sentence was handed down………………..She and her husband tried to free Waseem last month, saying they forgave their son for killing their daughter. 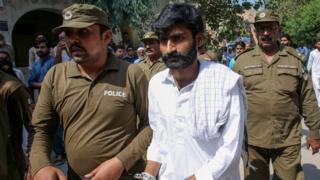 AFPWaseem was sentenced at a court to life in prison

Online, there was anger for Ms Baloch: Many described their reaction to the verdict as “bittersweet”, and expressed fear that – despite the conviction – things may not change for women in Pakistan…………”It took three years to get a judgement for her brother,” Sanam Maher – the author of a book on Ms Qandeel – tweeted………………..”I wonder how long it will take us to recognise that we shouldn’t let ourselves off the hook, that our social structure is rotten & works against people like #Qandeel who wish to make something of themselves on their own terms,” she added.

Qandeel Baloch made headlines long before her murder shocked the country: Once, she offered on Facebook to “strip for the nation” if Pakistan beat India in cricket. Then she posted selfies with a known cleric, Mufti Abdul Qavi, in styles that conveyed intimacy…………So when she was killed, many – including her family – pointed fingers at Mufti Qavi. This was despite Qandeel’s brother admitting on camera that he did it all by himself. 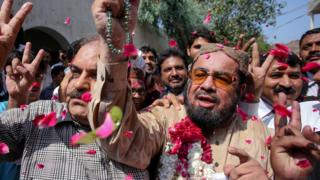 He did retract that statement during the trial – saying it was given under duress – which may be the reason he avoided capital punishment. He can appeal the judgment on the same ground: But while there may be a sense of relief among quarters sensitive to human and women’s rights, the twists and turns that afflicted Qandeel’s parents are a sad reflection of life in rural Pakistan.

Who was Qandeel Baloch?

Qandeel Baloch was Pakistan’s first social media star. She was born Fouzia Azeem, and came from a poor family in a town about 400km (248 miles) south-west of Lahore.

Often dubbed the Kim Kardashian of Pakistan, she had hundreds of thousands of followers on social media. She posted images and videos of herself twerking and singing, breaking strict taboos in socially conservative Pakistan.

As she became popular, she was paid to promote products on her social media accounts and appeared in music videos.

Following her rise to fame in 2014, it emerged that she had been married as a teenager and had a child. But she claimed her husband was a “savage man” who abused her and she fled with her son, residing for some time in a refuge.

However, she was unable to support the baby and returned him to her husband, who has always denied treating her badly.

As she continued uploading controversial posts, she was warned by her digital branding consultant that she was going too far. Junaid Qasi told the Guardian that she refused to listen.

What happened to Qandeel Baloch?

Ms Baloch was invited to meet Mufti Abdul Qavi in Karachi during the holy month of Ramadan: She posted selfies with him to her social media accounts. In one image, she is wearing his signature sheepskin cap: He was criticised for behaving inappropriately by associating with a disreputable woman. He was humiliated and his membership of a religious committee revoked…………..Soon after, Ms Baloch was found dead in her bed……………………Her brother Waseem said he drugged and then strangled her “for dishonouring” the family name.