﻿﻿#AceNewsReport – Sept.30: India’s monsoon season that begins in June usually starts to retreat by early September, but heavy rains have continued across parts of the country this year, triggering floods: https://t.me/reuters_news/99559

BBC News reported that more than 100 people have died due to flooding caused by heavy rains in the Indian states of Uttar Pradesh and Bihar, officials have said: Dramatic images of the impact of flood water on urban life have been coming out of the affected areas………………………..Railway traffic, vehicular movement, healthcare services, schools and power supply have been disrupted in both states, officials said…………………An Uttar Pradesh government report said 93 people have died since Thursday.

In eastern Uttar Pradesh, flooding caused officials to relocate more than 500 prisoners from the Ballia district jail to other prisons after water entered three buildings: The Additional District Magistrate told reporters that officials were awaiting permission to move all of the prison’s 850 inmates to Azamgarh jail, which is about 120km (74 miles) away……………..The death toll in Bihar is 29, according to the state disaster management authority. The impact on its main city, Patna, has been grabbing headlines. ………………..Satellite images from 20 September and 29 September show the extent of the flooding as the Ganges river overflowed due to the torrential rains in the region. 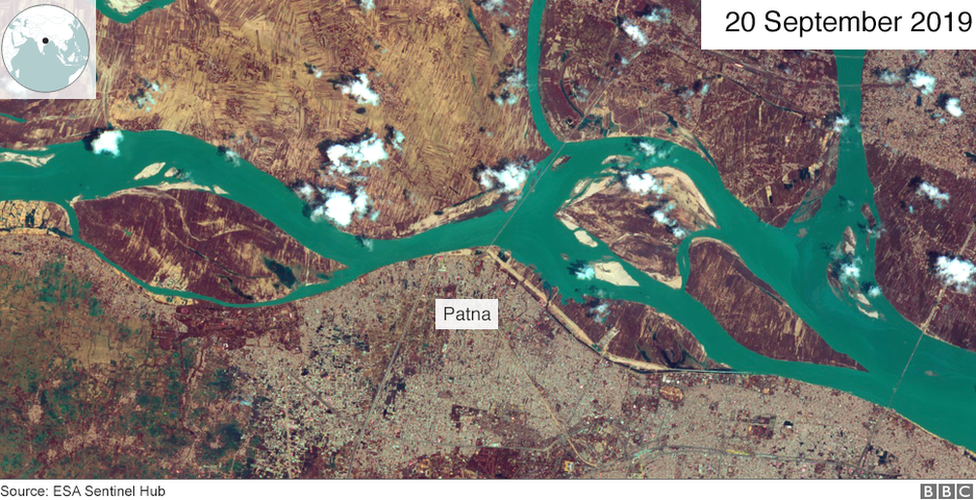 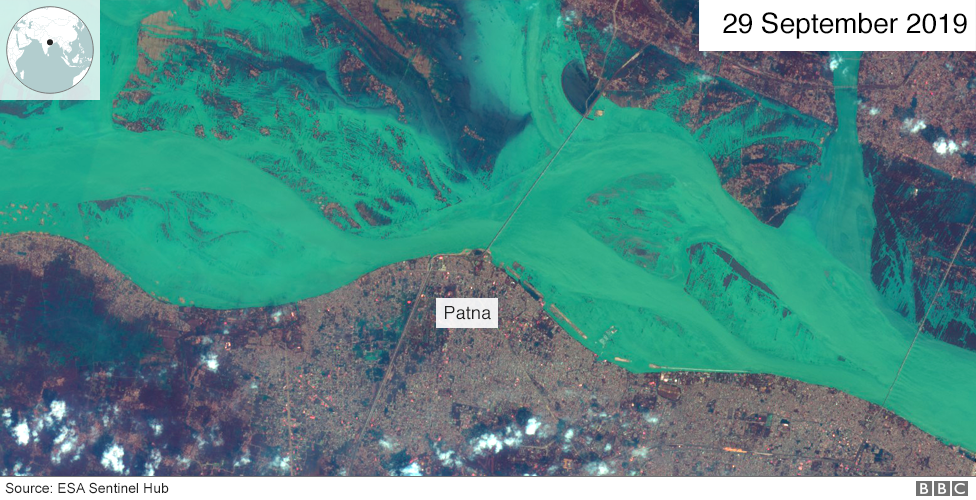 A video of a man struggling to pull his cycle-rickshaw out of flood water has been circulated widely on social media: In it, the man filming the video can be heard consoling the visibly upset rickshaw puller – he suggests that the man leave the vehicle where it is and return for it after the flood waters recede. He and a woman, who can be heard in the background, offer to keep an eye on it for the rickshaw puller from their spot on the balcony. 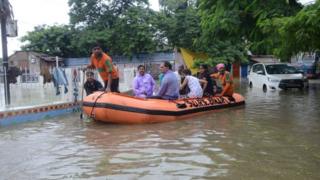 BBC HindiMain roads are being navigated by boat

The state’s Deputy Chief Minister Sushil Modi was on Monday rescued from his residence, the ANI news agency reported: Mr Modi and his family were evacuated from their flooded home by disaster relief personnel.

The city has been deluged with rain since Friday, submerging many residential areas: People are navigating the main roads – which are dotted with abandoned and partially submerged vehicles – by boat.

The PTI news agency quoted an official as saying that the amount of rain the city received was “completely unexpected” In many parts, the rain water has mixed with overflowing sewage, and the dirty water has entered several homes, according to reports. 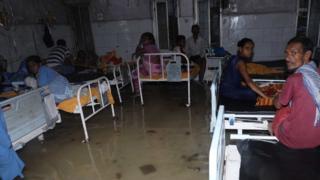 BBC HindiHealthcare has been disrupted in the state 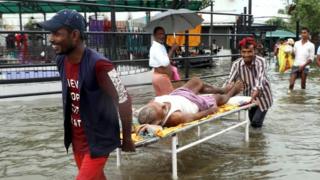 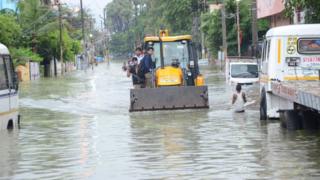 The state government has asked the Indian Air Force for helicopters and machines to pump out water………….